10,000 kits and counting for volunteer | TRNTO.com
Skip to content 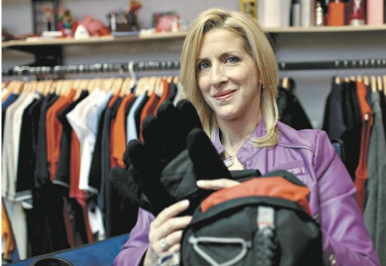 A RECENT MEETING at the Bargains Group Ltd. ended with staff members talking about something other than the discount clothing business where Jody Steinhauer works. One of the company’s interns came forward and confessed he’d been homeless for the last six years.

Jody Steinhauer has been helping homeless people in the city brave the elements for more than a decade. In winter, she works with Project Winter Survival, where she assembles and distributes kits with sleeping bags and winter gear. In summer, she works with Project Water, where she helps distribute bottles of water to the homeless. The reality that one of her own employees had been on the receiving end of their charity efforts hit very close to home.

“[He said,] ‘Thank you. I wouldvhave died without you. You have no idea the impact the kits make, and I had no idea that I was working for the company responsible,’” Steinhauer recollects. “We all started bawling…. That gave me the goosebumps to know that one of these people is in our company, to know that it’s gone full circle.”

To date, more than 10,000 survival kits have been distributed to shelters and outreach programs across the city as part of Project Winter Survival. And with the help of sponsors, over one million bottles of water have been donated through Project Water.

“They are both massive projects, and people don’t understand the amount of work that goes into them,” Steinhauer says. Since she and the rest of the staff at the Bargains Group devote a lot of time and effort to the projects and often work on them during regular work hours, Steinhauer says they won’t hire someone who isn’t enthusiastic about helping out.

Project Winter Survival grew out of a previous endeavour called Project Warmth when Steinhauer began a hunt for pledges and sleeping bags over a cellphone.

Twice a year, alongside a slew of volunteers, the company organizes two accumulation and packing days and aims to put together more than 2,000 kits per year. Through a $25 cash donation (which goes entirely to covering the cost of non- donated items like the sleeping bag and backpack), they are able to provide kits worth around $140, which include essential items to keep people warm in winter like hats, mittens and scarves.

“That gave me goosebumps to know that one of these people is in our company.”

“These are vital because funding has been cut to shelters,” she says. “[It’s] one of those few projects where you really engage those giving and those getting the kits … you can actually see where your $25 goes.”

When Steinhauer was told that more people die of dehydration in the summer than they do of cold in the winter, she says she was shocked.

She immediately started planning Project Water, which has grown to be so successful that plans are currently in the works to expand it across Canada.

Steinhauer says she’s committed to the projects until there is no need for them, which she say she sadly doesn’t see happening any time soon.

“This is a big city, this is Toronto, this shouldn’t be happening,” she says.