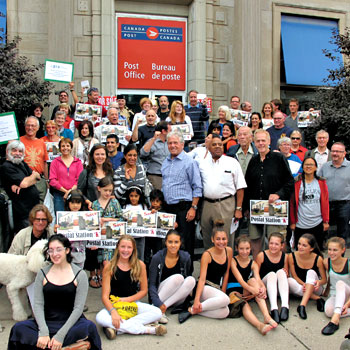 Residents concerned about Canada Post Station K’s fate have collected 10,000 signatures on a petition to save the storied building and have twice rallied in front of the post office. The national historic site was once home to Montgomery’s Tavern, William Lyon Mackenzie’s headquarters in the Upper Canada Rebellion. The current art deco building bears the rare royal cypher of King Edward VIII. Eglinton-Lawrence MPP Mike Colle was worried last month that time was running out, as Canada Post began to solicit written feedback from customers, which it is required to do one month prior to closing, moving or amalgamating locations.

“It’s not just about the history,” he said. “It’s the last public space we’ve got at Yonge and Eglinton, and if we can’t protect this 175-year-old site from becoming a condo, what can we protect?”

Colle is now looking for a member of federal Parliament to present the petition to Parliament. Local MP Joe Oliver, who has approached federal Minister of State for Transport Steven Fletcher to convey residents’ concerns, was told that the city and province have tools at their disposal to protect the building once it’s sold. Toronto City Council has already signalled its intent to designate the building as heritage.

Tom Cohen of the Eglinton Park Residents Association said the best-case scenario would be to persuade Canada Post to stay put.

“If we can’t  protect this site, what can we protect?”

“Bugaboo one is demolition. Bugaboo two is the Air Canada Centre, where you take the skin of an old building and you paste pieces of it here and there. Bugaboo three is privatization is such a way that the building is transformed into the lobby for a condo,” Cohen said.

Jon Hamilton, a Canada Post spokesperson, said he couldn’t speak to timelines or potential outcomes because it would be unfair to those participating in the request-for-proposal process it has undertaken.

“While we appreciate the concern [from residents], the building no longer fits our needs,” said Hamilton. “Our focus is on providing postal service and staying financially viable.”