A celebrity guide to getting out of Hogtown | TRNTO.com
Skip to content 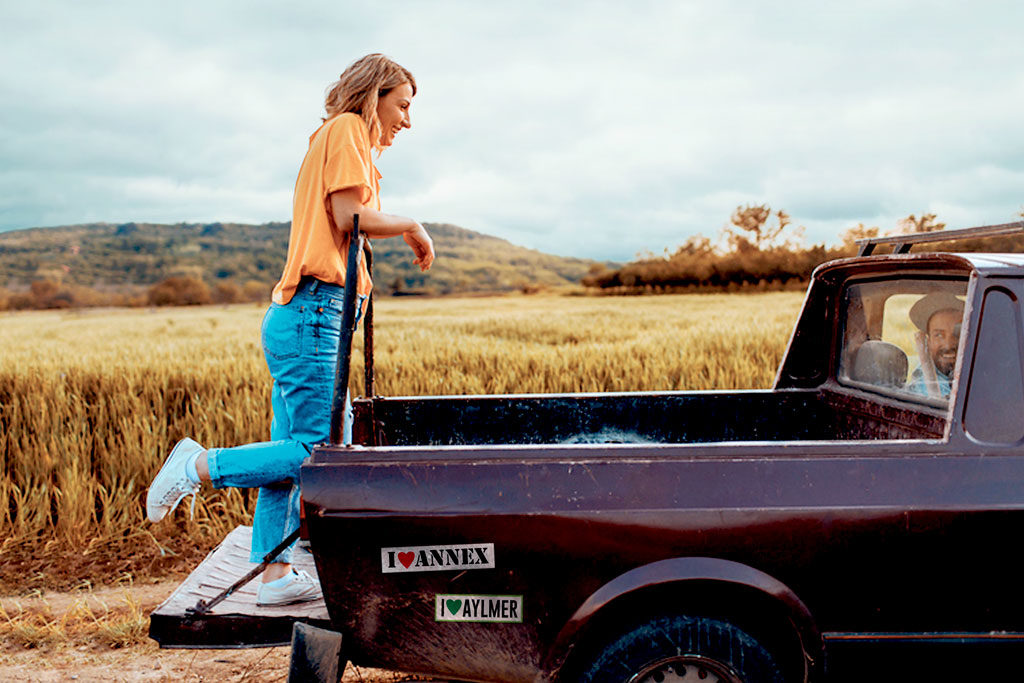 QUIRKY KAWARTHA
Actor Yannick Bisson on his new-found cottage persona
For Yannick Bisson, who spends much of his time on the period sets of CBC’s Murdoch Mysteries where he stars as William Murdoch, escaping the city (whether it’s the historic version or today’s) is a priority. So he and his wife Shantelle bought a little shack in the woods in North Kawartha last summer and have been building their dream cottage since. “We kept it manageable with two bedrooms and two baths. We love bringing the outdoors in, so we designed the cottage with all windows being floor to ceiling and facing the lake,” Bisson says.

With their busy work schedules in Toronto, the couple’s favourite aspect of cottage life is simply the opportunity to sit and relax. “Because our life is so social and busy in Toronto, when we go to the cottage, we tend to cook all our meals. We bring up fresh, organic food and cook for ourselves. But, on a rainy morning you’ll find us at Swiss Bear Restaurant & Bakery, which reminds us of eating at Shantelle’s late German grandmother’s house,” he says.

Bisson’s cottage persona is also as far as possible from William Murdoch. “I rarely have a shirt on, whereas in character I live in a three-piece suit. Shantelle never wears any makeup or even does her hair. We both walk around barefoot and use the opportunity to connect our bodies back to the earth,” he says. Although Bisson’s most frequent pit stop on the drive up is the Home Hardware in Apsley, he recommends taking Highway 28 and stopping in Burleigh Falls. “There is a charming little market, some lovely restaurants and cafés. And for sure you must head over to the Barn Chefs in Coe Hill. The owner is an Italian chef who has worked in some of the most elegant restaurants in the world and makes everything from scratch.” 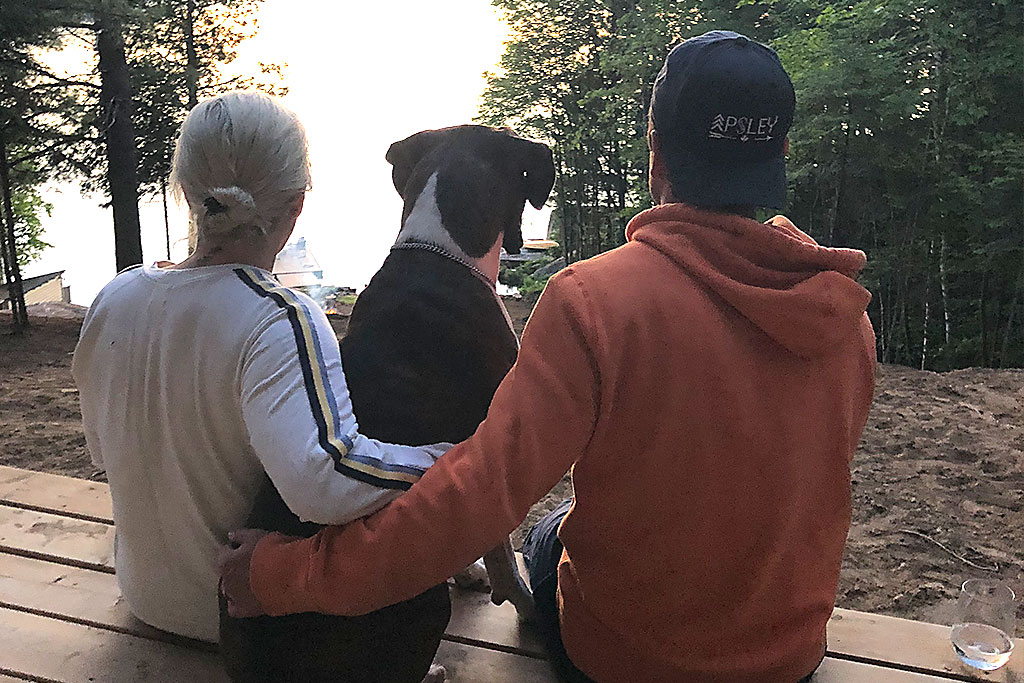 MEMORIES OF MINDEN
CBC sportscaster Scott Russell’s cottage is where he spent summers camping as a teen
“Some of the guys I went to summer camp with 40 years ago now have cottages there, and that’s what drew me to the lake, was that group of people I grew up with as a kid,” says Russell. This year, he and his wife will have owned the cottage — which has been dubbed Carluke after his grandfather’s birthplace — for eight summers. He describes the Haliburton Highlands as a relaxed retreat. Russell counts canoeing, paddle boarding, cycling and fishing among his favourite activities on the lake. 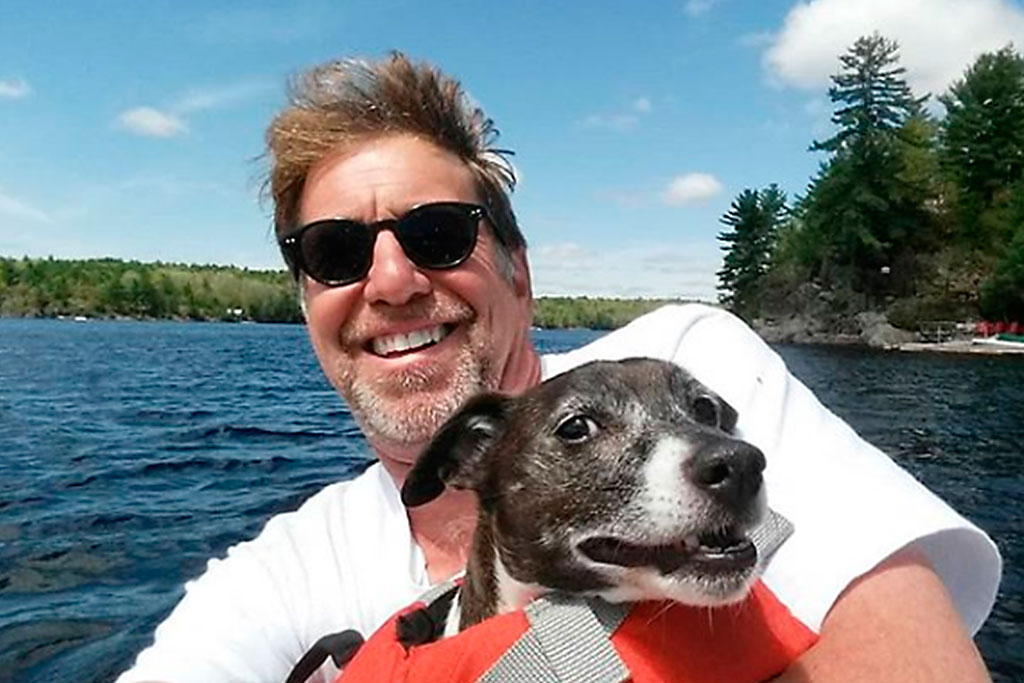 Scott Russell and his pup

ROSEDALE TO WARKWORTH
​T.O.’s fashion icon gives us the goods on where to grab some whimsical gifts and tasty treats in Northumberland County
Two years ago, Jeanne Beker and her partner Iain bought a century home in Warkworth. “I got turned on to Northumberland County 18 years ago. I have a farm in a nearby village called Roseneath,” she says. Now she’s been able to watch Warkworth grow into a burgeoning arts hub. She says the main strip is full of fab finds from the whimsical gifts in The General store to the locally sourced beauty products at Sunday’s Company and little works of art at Frantic Farms Clay and Glass Gallery. Beker also rocks a more laid-back style in town. “I wear ripped jeans here although I would never wear them in the city,” she says and laughs. Her insider tip is to visit Jeannine’s Backtalk Cafe. “It’s a very authentic place that was here before all the chic shops opened up. It’s got one big long table in the middle where the local artists and farmers get to really mingle.” To satisfy your sweet tooth, Beker recommends Centre & Main Chocolate Co. and then to burn off all those calories, go for a stroll on the Millennium Lilac Trail just off Main Street. 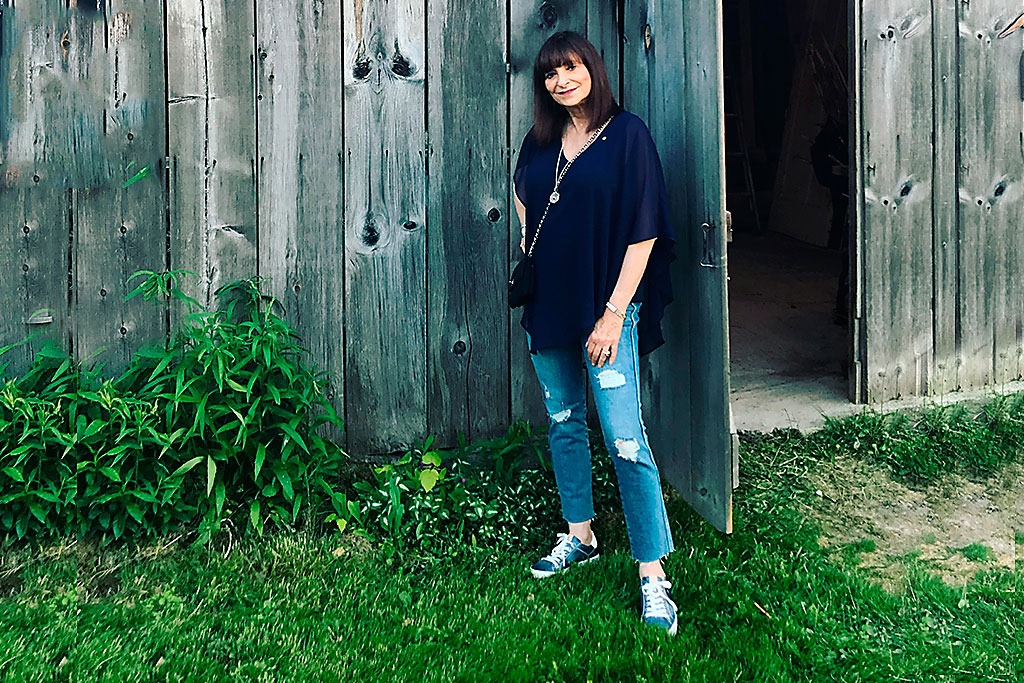 FONTHILL FAIRY TALE
Shakespeare in High Park actor Jason Cadieux works in the big city, but nothing beats his summer home in Fonthill
Two decades ago, Jason Cadieux and his wife Stephanie decided to buy an old house in her hometown of Fonthill, Ont. In 2011, after their daughters moved out, the pair did a major reno on the place, and it’s now a haven where they spend their summers. “Niagara is a gorgeous region. You really get that small-town feeling,” he says. The pair frequent the new performing arts centre in St. Catharines and the Shaw Festival. “The wineries for sure are gorgeous. I’m a cyclist and there’s great cycling out here, too.” Though Cadieux notes that the area is going through a growth spurt. “A part of me wishes it would stay small, but I also know it’s a good thing.” 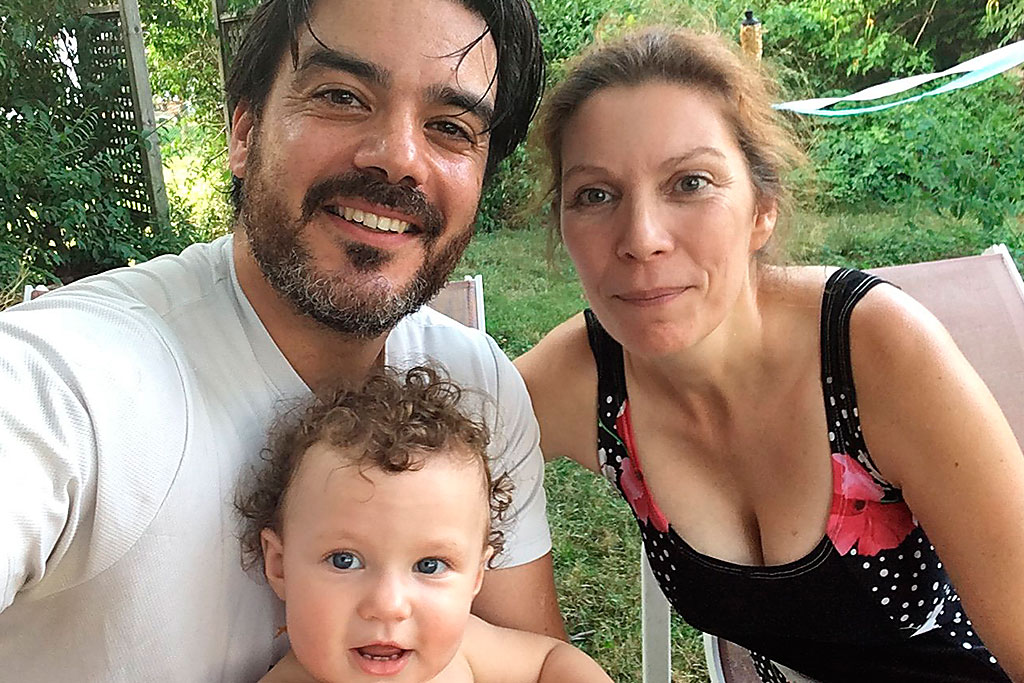 Jason Cadieux, and his wife Stephanie with their granddaughter Daphne

HEAVENLY HALIBURTON
Colin and Justin have become the cottage decor experts of Ontario
Home decor experts Colin McAllister and Justin Ryan bought their Haliburton cottage six years ago while cottaging with friends on Drag Lake. They bid on a basically abandoned abode and were able to nab their little diamond in the rough. “‘Halifornia,’ as we call it, is substantially more affordable than Muskoka, but the topography is virtually identical: all towering trees, crystal clear waters and fabulous Canadian Shield outcroppings,” says McAllister. With the cottage in their possession, they got to work on their renovations. “The former ‘slanty shanty’ was riddled with rot and animal infestation, and there wasn’t an airtight window anywhere, so we rolled up our sleeves and set to work,” says Ryan. When it comes to finding cottage decor in town, the pair loves Up River Trading Co. The shop has a café within and “The iced lemon poppy seed cake is off the charts,” says McAllister. Although they have spent much of their time busy with renovations (they redid the basement, added a sunroom, 2,000-square-foot deck, guest house, carport, hot tub and sauna, etc.), the pair has now decided to sell the space. They’ve bought several new properties all on the same lake and are about to dive into renovations on those. It seems like they are always renovating or filming (their new show, Great Canadian Cottages, will air this fall), but they do get some downtime here and there. “The swimming here is amazing, so as soon as it’s warm enough, we’re rarely out of the lake, and the hiking trails are amazing,” says McAllister. And they follow that up with scarfing down meals like fish and chips at Baked & Battered and family-style morning fare at the Kosy Korner on the high street. 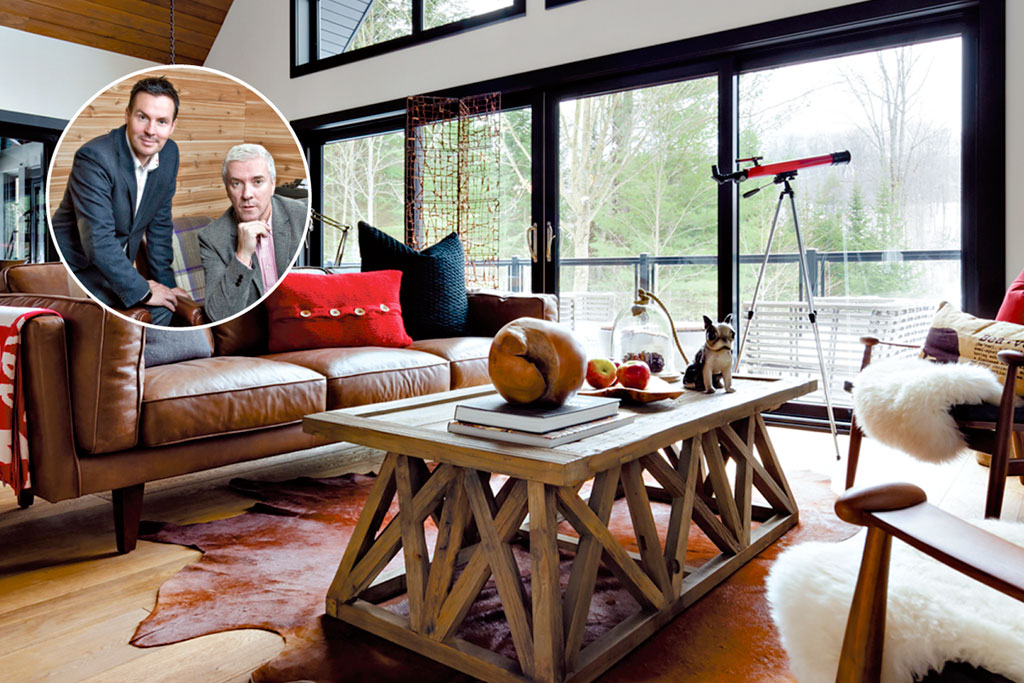 YORKVILLE TO THORNBURY
Chef Mark McEwan’s tips for a perfect day in his favourite place, Georgian Bay
“Make a reservation at one of the restaurants. In August you can come to mine,” he says. McEwan is opening a restaurant this summer in the old Sisi Thornbury spot. He says Bruce Wine Bar is also great, or the Orchid for a good old-fashioned breakfast. “You have to hit the water and rent a paddle board or bring your bike up and go for a bike tour in Beaver Valley. It has one of those beautiful long views. If you’re a golfer, come to Lora Bay. It’s a world-class 18-hole golf course.”

FROM LA-LA LAND TO PICTON
Actor Cara Gee on her fave towns in eastern Ontario
Cara Gee has always been drawn to big cities, even when growing up in the tiniest of towns. She hails from sleepy Nogies Creek just outside Bobcaygeon, which is just about as small as it sounds. Nowadays, the Toronto actor has recently transplanted to Los Angeles. But she will be back in town this fall to film the fourth season of sci-fi series The Expanse. When she’s returned to the good side of the border, Gee likes to unwind in Brighton, Ont., and nearby Picton in the Prince Edward County region.

“I love Picton,” she says. “What a beautiful, cool little town. It’s very cosy and very friendly, and there is a hub of artists and a really interesting gallery.” Amongst her favourite Picton spots are the Kingston Olive Oil Company, which imports fine olive oils from around the world and has a unique tasting room, as well as the Books & Company bookstore that offers a wonderful curated collection. And Coriander Girl, which started on Queen West in Toronto, has also opened a nice shop there, she says. But, her real insider secret is the Lake on the Mountain resort.

“It’s this geological phenomenon where there is this lake on the mountain that doesn’t make any sense, but it’s considered to be a very sacred site,” she says. “And if you go there, you can feel it, there is an energy to it that gets right into your bones. And there is a beautiful restaurant right there as well. I love it. It’s a really cool little spot.”

Nearer to Brighton, the area is a natural wonderland and home to Presqu’ile Provincial Park on Lake Ontario. “There is a beautiful lighthouse there and a lot of history about the ships that have crashed near there because it gets really narrow,” she says. “It’s probably haunted.” 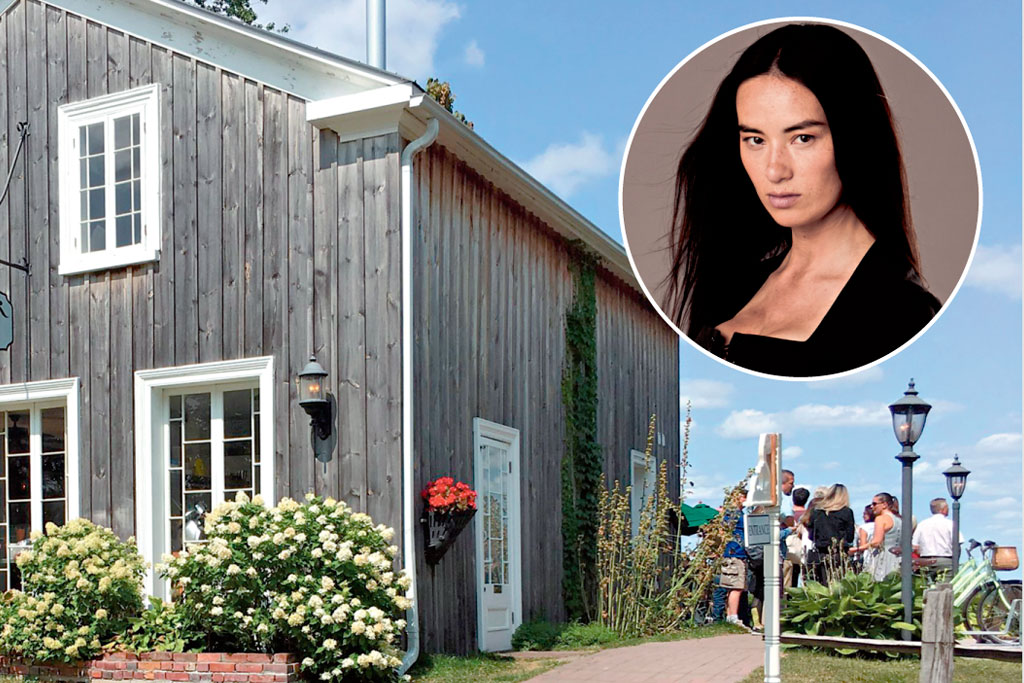 SUDBURY’S LITTLE ITALY
Nathan Dales, one of the stars of ‘Letterkenny’ which is filmed in Sudbury, is something of a professional hick
“Sudbury is actually pretty awesome,” Nathan Dales says. “The main lake in the city is Ramsey Lake, and it’s got bike paths and you can boat on it and fish in it. And there are tiny lakes everywhere.” The city is well-known for its large Italian community and Dales says there is no shortage of good food as a result. “Sudbury actually has some of the best Italian food I’ve had in Ontario,” he says. “There are a number of quite high-end Italian restaurants (Di Gusto and Bella Vita Cucina, for example) and some middle of the road places too.” The fifth season of Letterkenny is scheduled for release on June 29, and Hulu has picked up the first two seasons to air in the U.S. 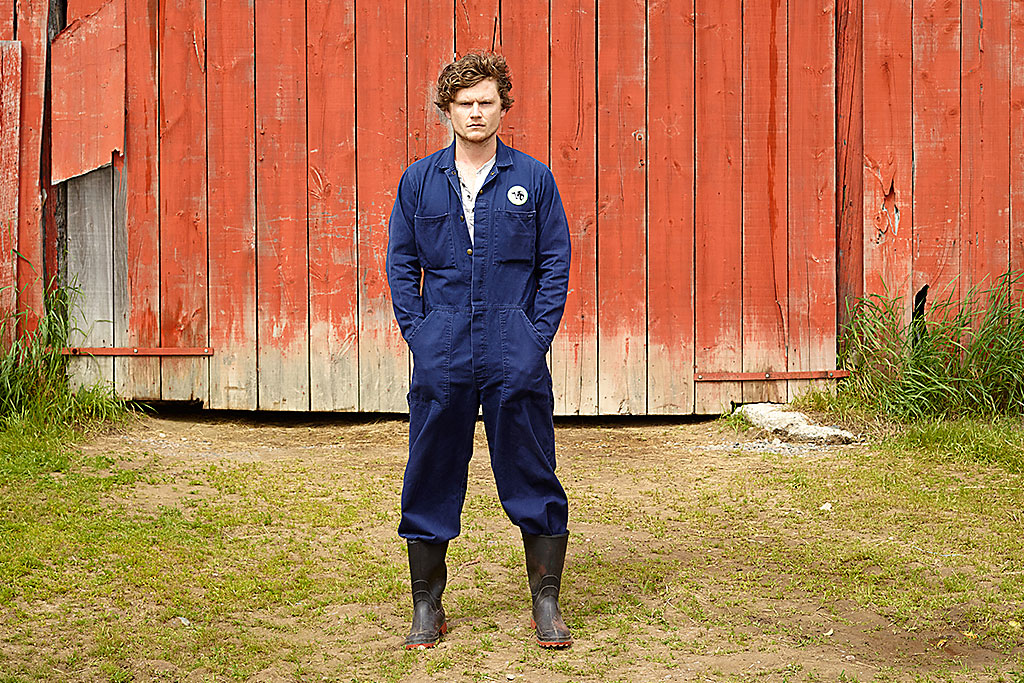 SMALL-TOWN MUSICAL HAUNTS
Whether putting down new roots or returning to old ones, these musicians dish on how they escape the city

BEYOND BELLWOODS
Singer-songwriter Ron Sexsmith arrived in sleepy Stratford, Ont., last year and has now bid adieu to his Trinity Bellwoods home. He starts his day with a walk along the Avon River and a coffee at Revel Caffe. He often heads to Soup Surreal. “It’s this little unpretentious shack where they just serve soup with a piece of toast.” Sexsmith will perform in August in the town’s concert series.

SAWDUST CITY TUNES
Musician Miranda Mulholland has a long history with Gravenhurst, Ont. “I’ve basically been going up there every summer since I was an embryo.” Mulholland started the Sawdust City Music Festival. It will take place in town from Aug. 3 to 5. She says the Chelsea buns from The Bakery are a must-try, as well as a meal at Oar & Paddle. “One of the best restaurants in Muskoka by far.” 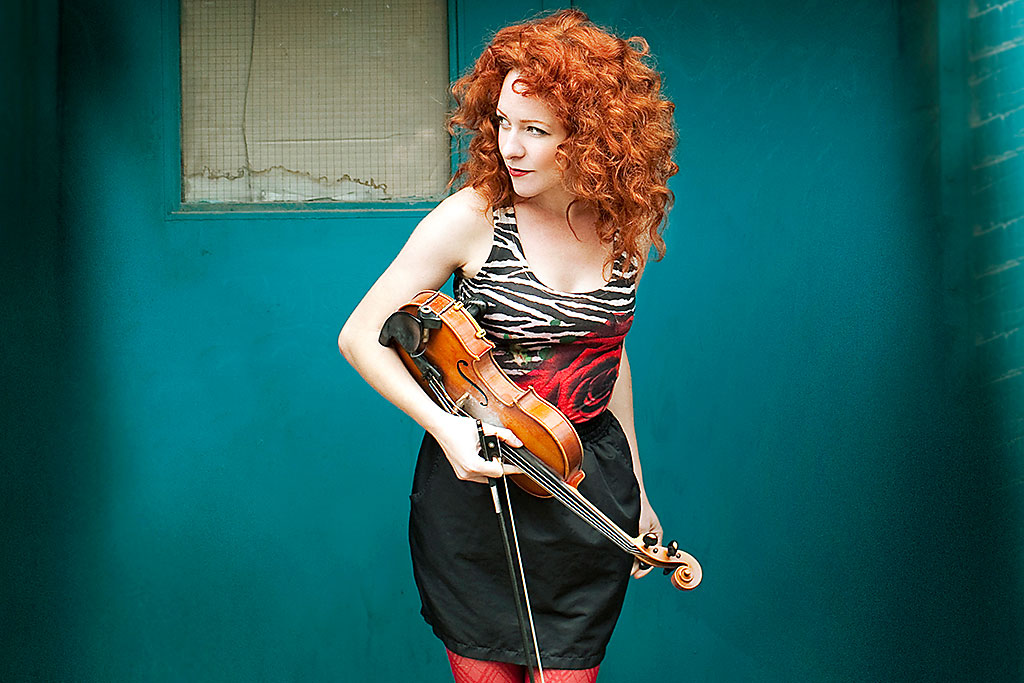 COUNTY ESCAPE
Having grown up in the Junction, Juno Award-winner Justin Rutledge has always known Prince Edward County as a welcome reprieve. “Last year, I found a beautiful place in Picton, built in 1890, so I bought that.” The area’s wealth of wineries is a big draw. The Old Third Vineyard and Grange Winery are two of his favourites. Catch him at the Wolfe Island Music Festival in Kingston. 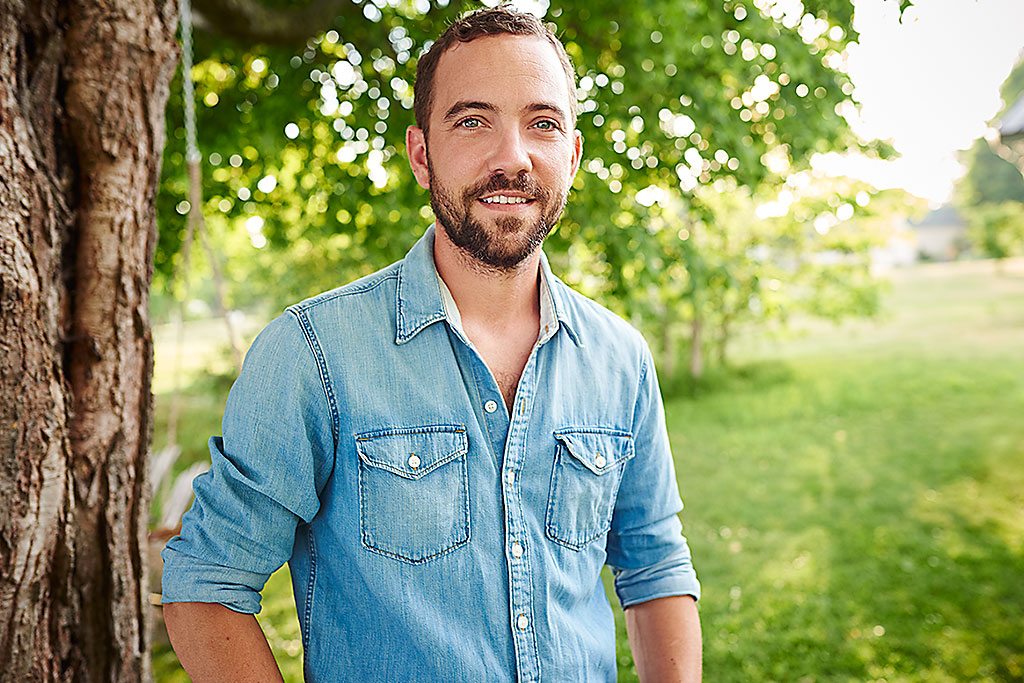