A crash course in kilts, just in time for the annual Beach Celtic Festival | TRNTO.com
Skip to content 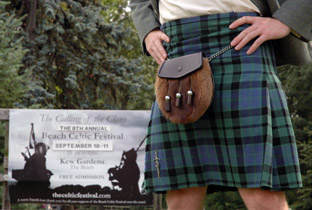 With the 8th annual The Beach Celtic Festival happening at Kew Gardens this weekend, everyone will be asking one question: “what’s worn under your kilt?” The answer, of course, is “nothing,” but seriously, what’s up with the kilt? Here’s an explanation of how the traditional attire of Scotland — now catching on around the world — is more than just a plaid skirt for men.

What:
The original “great kilt” was simply a huge piece of cloth; about five meters long. You would pleat half of it, roll up in it and wrap the other half around like a plaid toga. At night, it served as a blanket (meaning half as much laundry to wash, for those who bothered).

In 1746, King George II outlawed the kilt, because any man crazy enough to dress like that was bound to cause trouble. King George III made it legal again, but let’s remember that he was crazy. Queen Victoria had a Scottish fetish, and kilts have been in ever since.

The “traditional modern” kilt is short (let’s see some knee, gentlemen) and tidy, with shiny buckles here and there.

The “contemporary kilt” has traded in the tartan for pockets; it’s more like a pair of cargo pants than Highland dress.

Who:
Most kilts you see these days are worn by girls doing Highland dancing — as you will see at the Celtic Festival this weekend — but once upon a time, kilts were worn by men going into battle (after chasing down a few sheep to collect wool, of course, to make the kilts).

Why:
To save money, Scots didn’t bother with underwear or tailors or even buttons. They just took a big piece of cloth and wrapped it around themselves.

When and where:
Specific tartan patterns are designated for different clans (Mackay, MacAndrews, etc.) and, these days, the kilt is most often worn for celebrations and formal occasions, but thanks to the madness of George III, the kilt can be worn anywhere, anytime, by anyone.

Accessories and pronunciation guide:
The sporran (as in, “He’s pourin’ whiskey!”), is the man-purse to go with the man-skirt. Traditionally used to carry oats for lunch, it now conveniently holds a cell phone, keys and superfluous undergarments (which are good to have on hand in case a cold wind blows away your pride).

The sgian dubh (pronounced “ski an’ do”) is the “black knife,” hidden from the authorities but worn visible in the sock when amongst friends.

The kilt pin (pronounced “kilt pin”) weighs down the corner of the kilt to protect Gus from gusts and to avoid those Marilyn Monroe moments.

Flashes (it’s not what you think) are the fabric wrapped around the knee to hold up the socks and the sgian dubh.