A love story that sparked at Dusk Dances | TRNTO.com
Skip to content 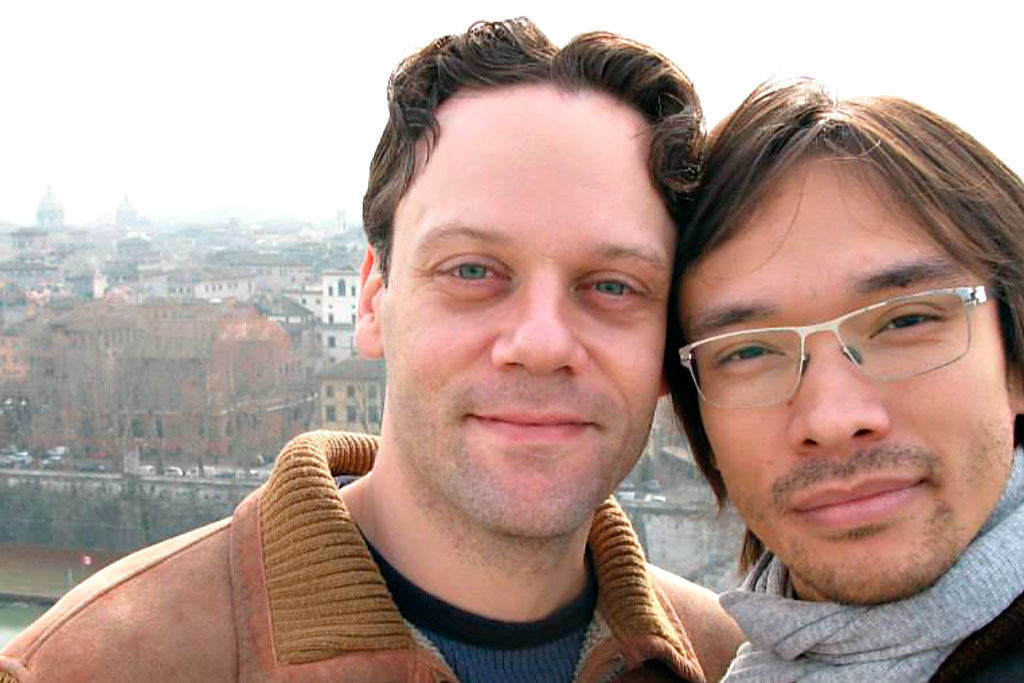 Michael Caldwell has many fond memories with Dusk Dances. He is the guest curator for this year’s event, held at Withrow Park from Aug. 5 to 12, but it was at this event 11 years ago when he felt an initial spark with his husband, fellow dancer Louis Laberge-Côté. Here’s how it all went down.

How they met
Michael: We first met when I was auditioning for the School of Toronto Dance Theatre. Louis was on the audition panel, as he was a member with Toronto Dance Theatre. Over the next few years, we passed each other in hallways and worked together a few times without actually ever having a conversation beyond surface-level pleasantries. It wasn’t until the summer of 2007, when we were roommates on the Dusk Dances tour, that we officially got to know each other and became a couple.

The first date
Louis: Our first date was a double feature at the Scotiabank Theatre — Ratatouille and The Simpsons Movie — followed by a late night dinner at Fran’s at Yonge and College. We had spent about six weeks together on tour and had already developed a close relationship, but it was important for us to go on a “real” date to make sure it wasn’t just the tour bubble that was driving our desires.

The courtship
Michael: Once we returned from the six-week Dusk Dances tour, we started dating right away and quickly formed a committed relationship after about a month. We were engaged five months later and married less than a year after we got to know each other on tour. I guess it’s like the saying goes, “When you know, you know.”

“We were engaged five months later and married less than a year after.”

The wedding
Louis: Our generous friends offered their backyard to us, and we had a small wedding with about 50 guests. At first, we did not go on an official honeymoon as we were working and dancing for the summer — though we certainly treated the following Dusk Dances tour as a celebration of sorts. About a year later, we spent a week at an all-inclusive resort in the Riviera Maya in Mexico.

Balancing careers and marriage
Michael: We are both very active in the dance community in Toronto, in a number of different capacities. I value symmetry in our relationship, so it is so great to be paired with someone that truly understands the stresses and successes of a career in dance. As for balance, we find that we are selective about when and how we speak about dance at home. It’s good for us to have a separation from our work life by exploring different aspects of ourselves in our home life.

Shared hobbies
Louis: Is Netflix a hobby? Otherwise, we are definitely foodies and love good food and wine. We try to go to a fine-dining restaurant once a month to partake in a multi-course dinner with wine pairings. It brings us so much joy.

The home
Michael: We have lived near Carlton and Church for years (since even before we were married) and have no intention of leaving anytime soon, especially with Louis’s recent appointment as an assistant professor in the dance program at the Ryerson School of Performance.

Secret to success
Louis: Humour. We laugh all the time, making jokes, trying on funny accents and just being silly together. Our work lives are so hectic that we find relief and solace in each other’s presence.

Looking to the future
Michael: Our immediate future is firmly planted in dance. In addition to Louis’s teaching at Ryerson, he is also presenting a major solo work entitled The Art of Degeneration at the Citadel at the end of October. I am the festival producer at Dusk Dances and artistic producer at Fall for Dance North in early October. So we really prefer to live in the present as much as possible and allow the ins and outs of life to guide us forward. We strive for financial stability but try to remain as flexible as possible to take advantage of whatever might come our way.