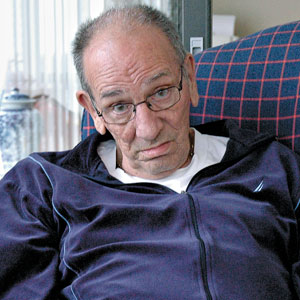 RAY TURNER’S LIFE changed in September 2007 when he was diagnosed with ALS, commonly referred to as Lou Gehrig’s disease.
“I was told I was going to be dead in a couple of years, and you know, psychologically, I was having a bit of difficulty adjusting,” he says.

ALS is a fatal neuromuscular disease that leads to progressive paralysis of the voluntary muscles. As is the case with many, Turner admits he knew nothing about the disease until he was diagnosed.

It took about three months for Turner to come to terms with his condition, and it was at this point he began to open up reading material he was given by ALS Ontario.

Turner was unhappy with the pamphlet’s constant reminders of the fatality of the disease and e- mailed the ALS Society about it.

“I kind of said, ‘You know, that’s not very encouraging to read, and I think it’s time you change your brochures a little,” Turner recalls.

The ALS Society responded to Turner’s request, and it was at this point he began to really get involved with the organization.

The local resident began looking for possible companies that could donate funds for Lou Gehrig’s research. Then, Turner discovered where he really fit in the most.

“I found that my ability to talk to people with the same disease I’ve got was quite easy. It was not difficult to get people to open up,” he says.

Turner would lend a supportive ear to ALS patients, and they were able to discuss their frustrations in a safe, non- judgmental environment.

Once, a woman called in with feedback on Turner, who had just been talking with her husband. Turner had cheered the man up, and his wife explained that he was understanding the disease more and was having a much easier time.

“I kind of said to myself, ‘I did something good today. I got somebody out of a funk and into laughter,’” Turner recalls.

Sometimes Turner encounters fellow patients who cannot and will not accept the reality that they have ALS.

“The only thing you can do at that point is put them on a thinking path that you have to do this yourself. Using my experience, I’ve sent them down the path to help them accept it,” Turner says.

“ I feel good about myself, and that’s my definition of fun.”

His strong will and spirit in the face of ALS shines through, as he discusses how he finds ways to get out, have fun and enjoy himself. By volunteering with the ALS Society, Turner feels as though he has accomplished something.

He helps raise funds through the society’s Walk for ALS and also leads an ALS support group at Sunnybrook.

“I feel good about myself, and that’s my definition of fun,” he adds. “You don’t have to be tied up in the house all the time. You can go out and experience things. That’s what I like to do.”

On May 8, Mitch Albom’s best- selling memoir, Tuesdays With Morrie, takes the stage at the Winter Garden Theatre. All proceeds from the premiere will support the ALS Society of Canada.