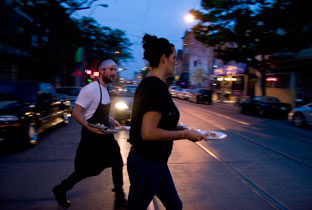 Anyone hanging out in Parkdale Wednesday evening may have stumbled across an interesting spectacle: a chain of rather hip-looking servers scurrying through Queen West’s traffic, arms brimming with plates of meticulously prepared food. A pop-up restaurant was, of course, to blame. In this case, it was Boxed, a roaming supper club by chef Matthew Sullivan (formerly of Spice Safar), who launched his concept at The Mascot Wednesday.

A true pop-up, Sullivan says, shouldn’t take place within a pre-existing restaurant. So when The Mascot — a straight up coffee shop — was chosen as the venue, Sullivan looked across the street to grilled cheese destination Mangez for cooking space. He found just barely enough to work with — and Queen West motorists found themselves having to contend with front-of-house staffers scuttling between the two venues.

“I’ve had an easier time cooking while camping,” Sullivan says, “but it was fun.” In creating a locally-sourced, five-course meal for 25 hungry guests, his kitchen was equipped with the following: two rented butane stoves, two panini presses, a sink and a dishwasher. It was, as he puts it, “MacGyver-style cooking.”

Boxed will continue to hold dinners at various, probably-awkward-to-cook-in locations throughout the summer. Future pop-up venues will be revealed through Twitter, and while the dinners are typically invite-only, a 24-hour email reservation line (eat@boxedtoronto.com) will open to the public two days before an event. Locations will be revealed through email the day of the dinner.

We were on hand Wednesday to indulge in the $80 five-course dinner (disclosure: we got a media invite, and Sullivan is “Chef” from our Chef & Me series). Here’s what we had:

First course: Trout from Ontario’s Lovell Springs Trout Farm, cold-cured in salt, sugar, lime zest and a bit of Thai fish sauce, cut sashimi-style and served over toast. The fish were caught the day before and garnished with just-bloomed chive flowers.

Second course: Gnocchi, hand-made with a dough consisting of twice-roasted potatoes and a puree of sauteed field greens and radish tops. The gnocchi were doused in a sauce of fava beans, freshly shucked green peas, mint and arugula. Pickled radishes added a bit of bite and acidity, while arugula provided a final garnish.

Third course: The highlight of the night, this steak from Black Angus Fine Meats and Game was dry-aged for nearly 80 days. Sullivan coated it in salt and peper, then seared it in a cast iron skillet that was pre-heated, for lack of better equipment, on Mangez’s panini press. On the side was a cured egg yolk, while the steak itself rested on a dried-scallop congee.

Fourth course: A slice of Monforte Toscano cheese accompanied with fingerling potatoes — pickled for a week in cider vinegar and gin, then quickly blanched — and an Ontario strawberry sauce.

Fifth course: This dessert from pastry chef Carlo Lazzarino was a white chocolate and green tea mousse with a honeydew melon sauce and a chocolate and cherry crumble. 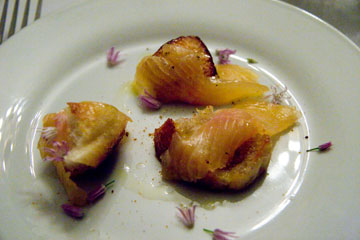 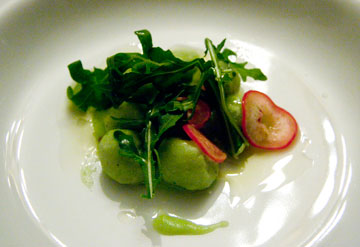