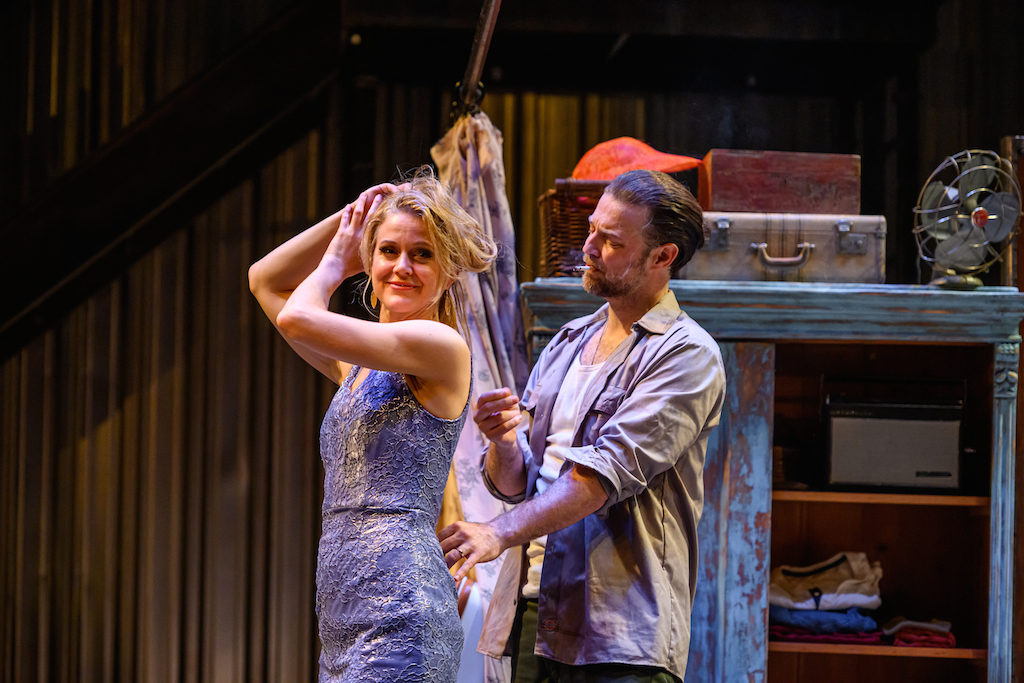 A Streetcar Named Desire is a powerhouse of a play. To tackle such demanding work requires boatloads of ambition and skill. Soulpepper’s latest production, which runs until Oct. 27, has both. The result is a stunning effort featuring some of the best acting performances of the year.

The Tennessee Williams play premiered on Broadway in 1947 and has had countless productions and one very memorable film in 1951 starring Vivien Leigh and Marlon Brando.

The plot at this point is well-known. Blanche Dubois travels to New Orleans to seek the comfort of her sister Stella after losing their family estate Belle Reve. Stella has married Stanley Kowalski, an ex-Army Corps engineer with a penchant for wild bouts of drinking and breaking stuff including his partner’s face. Blanche arrives penniless with the intent of settling her nerves after losing her teaching position. As the story unwinds, it becomes clear that she has lost more than just their family home.

The Soulpepper production features Amy Rutherford in the role of Blanche Dubois, who last tromped the boards for the company back in 2008. And in the role of Stanley Kowalski is Mac Fyfe, who won a Dora Award in 2015 for his role in VideoCabaret’s Trudeau and Levesque for Soulpepper.

Although the rest of the cast is wonderful, these are the roles that define A Streetcar Named Desire. And both are tackled with intensity and finesse in this production by two fine actors.

The creative set begins with the corrugated metal completely covering the walls at the back and side of the stage. The primary space consists of two suspended door frames and doors outlining Stella’s small sparsely furnished apartment in which the vast majority of the play takes place. There is also a second, upper apartment door cleverly placed along the back wall of the set with metal stairs leading up to the doorway. As well as, a sliding window that reveals a house band on a few special occasions.

The play clocks in at about 3 hours and 15 minutes including a 20-minute intermission. And, given our microscopic attention spans these days, that length might be intimidating to some. Rest assured, it flies by. This work is so gripping and so well-performed that it seems virtually impossible not to get wrapped up in the story and revel in such special performances.

Indeed, the interplay between Stanley and Blanche is powerful. The two actors so locked into their characters at moments demonstrating sheer desire, rage, horror and devastation in equal parts.

Of course, success with Streetcar begins and ends with Blanche. Her slow descent into madness needs to be precise. There is a balance required. Give away too much, too soon and the audience will have less attachment and empathy with the character. Rutherford gives it her all, as the role demands, and nails the performance.

Rutherford’s Blanche is eccentric and charming in the first act before cracks in the delicate world she’s constructed begin to develop and the desperation grows until she becomes utterly lost and unhinged. It’s a performance that does not fail to keep the audiences’ attention. She demands it. Demands we witness the descent and in so doing see a piece of ourselves in the story as it unfolds. How fleeting it all is. How transitory. Not to mention how relevant the work still is.

And that’s what good theatre does, in the end. It’s as much about our reaction as it is about what takes place on the stage. There’s a reason this play won the Pulitzer Prize and is one of the most iconic works of the 20th century.

Now, there are also a number of clever asides that make this production fun. For instance, the use of musical interludes as well as entrances and exits directly into the aisle. Some of the scenes take place right on the edge of the stage almost in the audience.

Hats off to director Weyni Mengesha who created such a fascinating and fertile environment for these young actors to push themselves to such heights.