A survival guide to a very crowded midtown Toronto - TRNTO.com
Skip to content 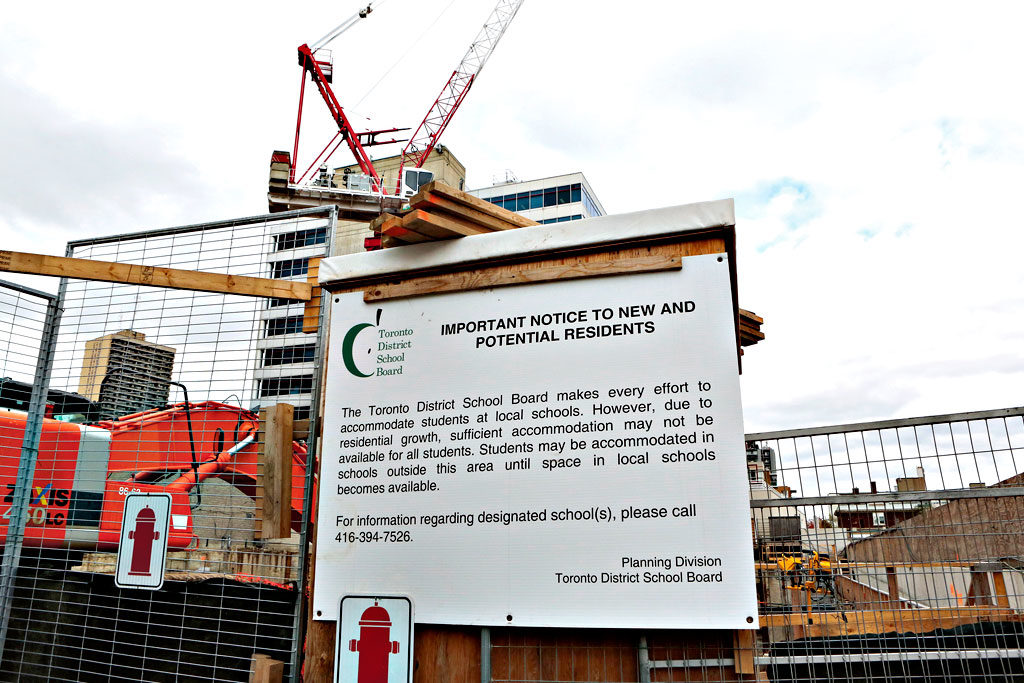 Toronto is busy, and many are asking just how much more busy it could get after the provincial government announced it was going to take a more active role in guiding the development policy of the city, especially regarding the midtown and downtown areas.

And “more active” seems to mean taller towers, more units and a not-yet-defined method for the city to collect revenue to build the required infrastructure. It’s a problem. To that end, we reached out to experts in key areas to see what this means for local residents.

No seats on the subway

Line 1 of the Toronto Transit Commission subway is overburdened to the extent that it has become a running gag around the neighbourhood, not to mention the all-too-frequent service disruptions and shuttle buses.

Eglinton ranks as one of the top 10 busiest stations in the system and sees more than 68,000 riders each day. Add thousands of more people as more and more residential developments break ground, and the future seems to be nothing but sardine city.

Sure, hope is on the way, eventually, when the Eglinton Crosstown opens its doors in 2021, but until the Relief Line gets built, little will help those heading south into the downtown core to work each morning.

Transit advocate Steve Munro said that, although the Crosstown will improve access outward from the Yonge Street and Eglinton area, areas such as Don Mills and Eglinton are more residential, and thus more likely to originate trips rather than act as a destination.

“We passed the point of no return years ago and now have to suffer through an overloaded transit system, thanks to [politicians] and voters who spent time fighting over which transit vision to build rather than just getting on with the job,” said Munro, reflecting on constantly changing plans at the various levels of government.

What you can do:  If your commute is less than five kilometres, chances are you can bike there faster than you can drive, not to mention the money you’ll save. Working off-hours to miss the morning crush or, even better, working from home are also solid options.

No places for kids to play

One only has to stroll past Eglinton Park in the early evening or on weekends to see just how well-used the parks are in midtown: they are packed. Signing up for a good recreational program is harder than scoring a cannabis retail licence, and the problem is only growing.

“The city’s own studies and planning work have shown that the Yonge-Eglinton area is a priority location for acquiring more parkland as the intensity of development increases,” said Jake Tobin Garrett, policy and planning manager at Park People.

“That was one of the key reasons they initiated the Midtown in Focus study, which included a really robust park and public realm plan,” he explained. “It would ensure that, as the area grew, the parks and public spaces to serve new and existing residents grew with it. “

Then the province got involved and rewrote plans that were years in the making.

Garrett is concerned about the provincial changes to how parks are funded and secured by cities, such as the removal of mechanisms that allow the city to secure an amount of parkland from developers based on the number of units built.

“Building high-density neighbourhoods without the appropriate park space is setting up neighbourhoods to fail,” said Garret. “This is especially critical in neighbourhoods where many people are going to be living in towers, such as Yonge-Eglinton.”

What you can do: Although park space is at a premium, there are plans afoot to maximize availability with updates to, for example, Eglinton Park, via the City of Toronto’s master plan as well as the pending redo at David Balfour Park. Also, try new sports such as climbing, cricket and Ultimate that take place in non-traditional spaces opening up more recreational opportunities.

School bussing not the answer

Midtown residents first noticed the signs going up around the neighbourhood many years ago. Each new City of Toronto Planning sign indicating an impending development was accompanied by another sign stating that purchasing a condo at said development did not ensure space at a local school Short answer: They are full.

For instance, since 2012, the pupil yield per condo unit in the Eglinton Junior Public School area has doubled and is now substantially higher than other parts of the city, suggesting all those new condos won’t just be filled with singles like it was in the days the area was dubbed Yonge & Eligible.

All those kids are going to have to go to school somewhere.

“Schools in the Yonge-Eglinton area are at or over capacity,” said school trustee Shelley Laskin, who said she supported the Midtown in Focus plan because it treated schools as infrastructure; she continues to push back against development when there are no school spaces.

Laskin said that in 2018-19, Eglinton Junior Public School had 605 students in a building with a capacity for 548, and the school’s site can’t accommodate portables.

To control future growth, an alternative school was relocated; the school’s grade range was reduced from JK to Grade 6 to JK to Grade 5; the school’s boundaries were adjusted; and future students from proposed developments in the catchment area will be assigned to other schools.

The Toronto District School Board (TDSB) continues to grapple with long-running budget issues. Add a rising population (thanks to overdevelopment) to the mix, and a city and province that hasn’t found a way to invest in local schools, and it is a pattern that is bound to repeat itself.

What you can do: Well, there’s always private school. There is also a high likelihood of arrangements such as the one with North Toronto Collegiate Institute. When that school started crumbling, the TDSB partnered with a developer, who built a shiny new condo and an equally shiny new high school next door. The TDSB has also been looking into vertical schools.