From boots to snowshoes, a Toronto school ventures into the woods - TRNTO.com
Skip to content 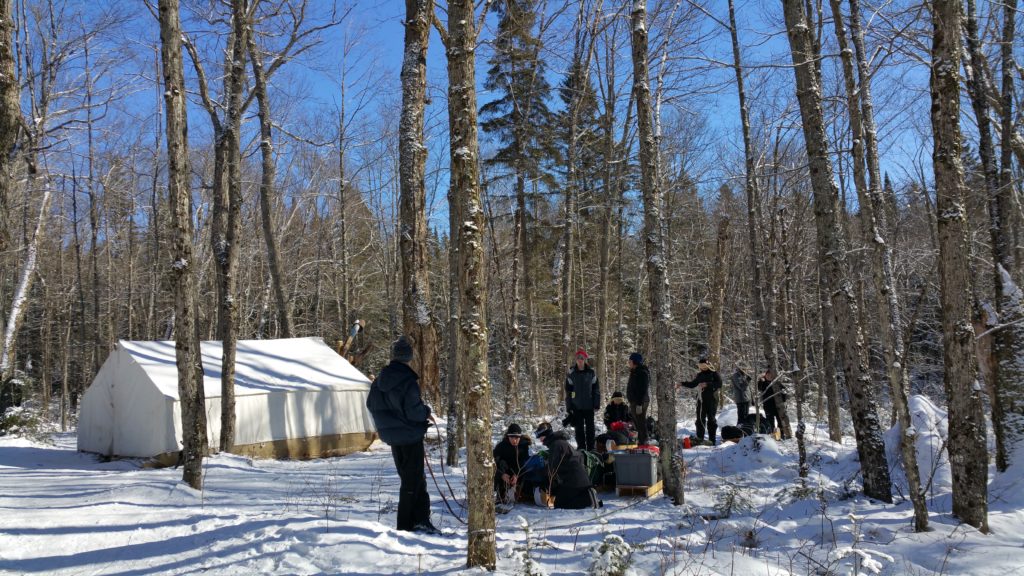 Each year, grade nine students from The York School dive into the woods of Haliburton for several days as they brace themselves for an altogether new experience. They will trade the comforts of their homes and the connectedness of their devices for a wood stove–heated prospector tent or, for an extra challenge, the insulated warmth of a quinzee built from the snow itself.

Students inevitably approach this experience with mixed feelings. Maybe they feel trepidation at the level of discomfort they are about to accept into their lives. Some look forward to the challenge and to being outside. Most worry about putting their devices away for the week. 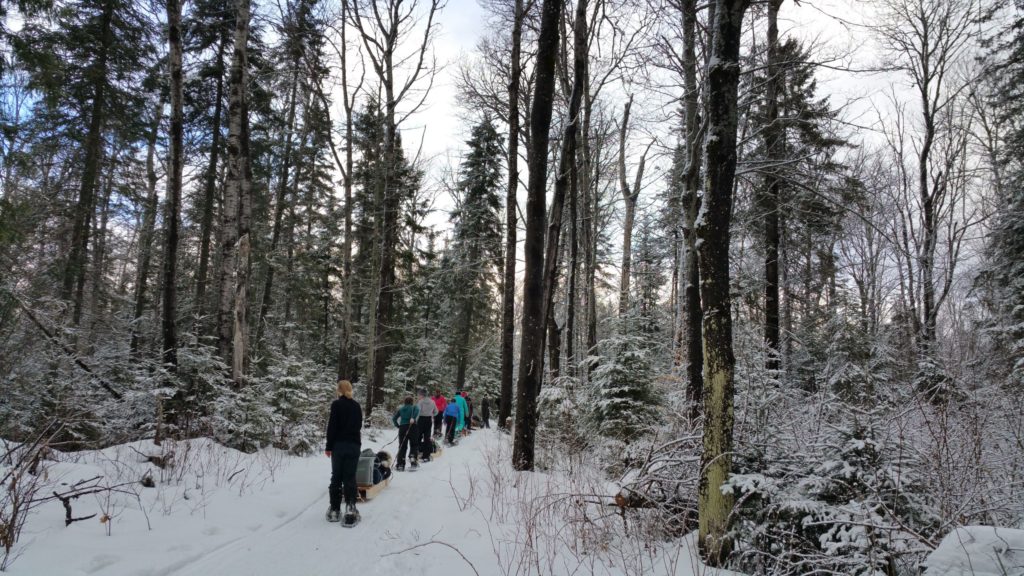 The experience itself is unforgettable. For some it is a spark that ignites a love for the outdoors. For others it is a memorable and exciting experience that will remain with them forever. In every case, these young individuals walk away with newfound self-knowledge and an incredible respect for the outdoors. Even, almost in spite of themselves, the kids end up having…fun.

The benefits of winter camping are much farther reaching than the instantaneous fun. One year, students came back to the classroom and as they assessed what had made the experience such a special time, they landed on cellphones. They started assessing how they interacted in the forest versus how they socialized on campus and in the city. There was not one student who didn’t recognize that the difference was vast, and that their conversations in the woods were far more interesting.

One student finally articulated what the others were talking around, and it seemed a direct criticism of Instagram, Facebook and the other social media giants. She said, “While winter camping, we shared stories about ourselves and our camping experiences. At school, we talk about what we like.” Without the mobile prompt of a social media feed, students had to rely on their memory bank and personal experiences to spur on conversation. In the woods, students had to share of themselves rather than skate on the surface of the most recent trends. 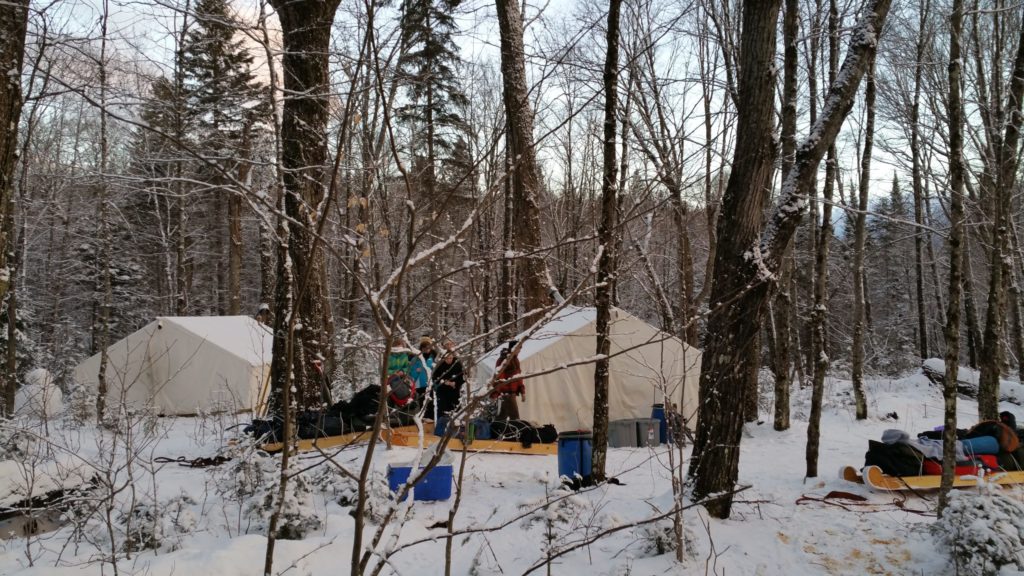 These students were so inspired by their winter camping experience that they placed a self-imposed cellphone ban on the entire class. They asked me to collect their phones at the beginning of the day to return them only once the day was done. I began to notice students clustering in diverse groupings to discuss everything from movies to current events. Their voices clashed as they expressed divergent opinions about things that really mattered to them. I’m not certain that they would attribute this shift to a lesson in the woods, but I could definitely see the power of those campfires under a cold, starry sky.

While the place of our devices is a topical issue of ongoing concern, the most important lesson offered by the Canadian winter is one of self-reliance. Today’s North American children are growing up in what has become the most protective environment known to adolescents. Experience and research are both telling us that these bubble wrapped young people are being shown a disservice as loving adults try to forge clear paths to their futures, lined with perfectly groomed experiences and eagerly helpful mentors. We are not allowing young people the opportunity to make choices about how to spend their time, to take on new experiences — to fail at them and to learn from them. We are shattering their confidence as we suggest by our coddling that we always know better and that their best is never good enough.

Out in the woods, in minus 25 or in a wet zero degrees, students themselves need to decide how many layers to wear, which wood will fuel the hottest fire, when to take a break and when to get moving. Young people problem-solve and decision-make all day long with no one but themselves to feel the consequences of their actions. Their comfort will rely on their harvesting of firewood. Their hunger will be fed by their own cooking. And, their entertainment will rely on their own imaginations. 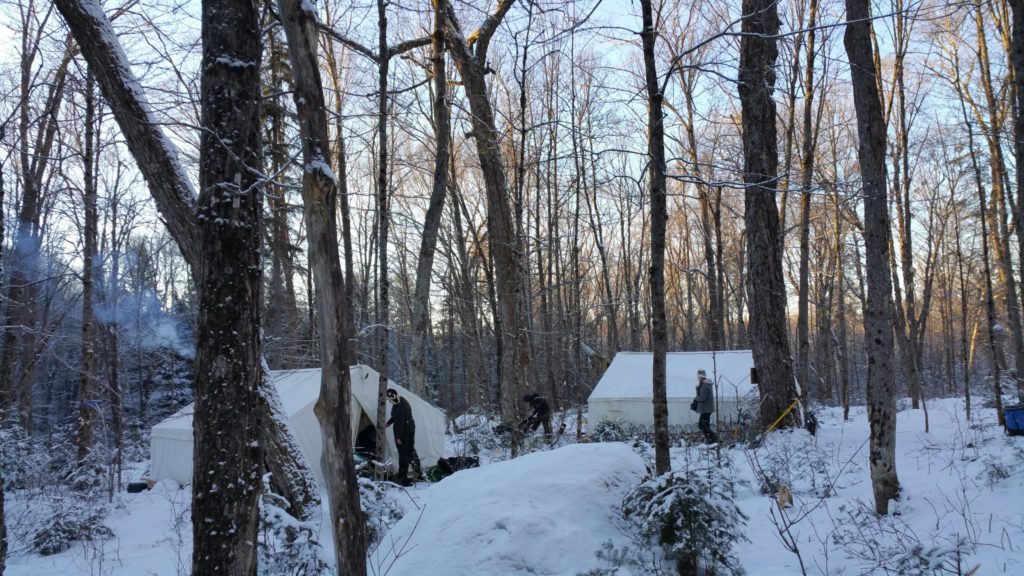 One year, I remember watching my most rambunctious group of students take off into the woods to warm up with some good, old-fashioned physical activity. When I set out after them a few minutes later, they had already found a long, large tree that had fallen over another. They were standing in two groups, one on either end, and were proudly declaring they had made a ‘treeter-totter’. It was good to see how easily these city slicker kids could return to a simple sense of fun that stemmed from the interaction between their own imaginations and the wilderness around them.

At the end of the trip, when students exchange snowshoes for city boots and climb onto the coach to return home, the pride they feel in themselves is palpable. They have survived in the Canadian winter, relying on themselves and contributing to their group. They are independent and strong, can overcome discomfort and can make their own fun.

The greatest lesson they have learned from the wintery woods? It is time to shed the bubble wrap. Their paths forward do not need to be easy and clear. They are ready.

Photos provided by The York School.