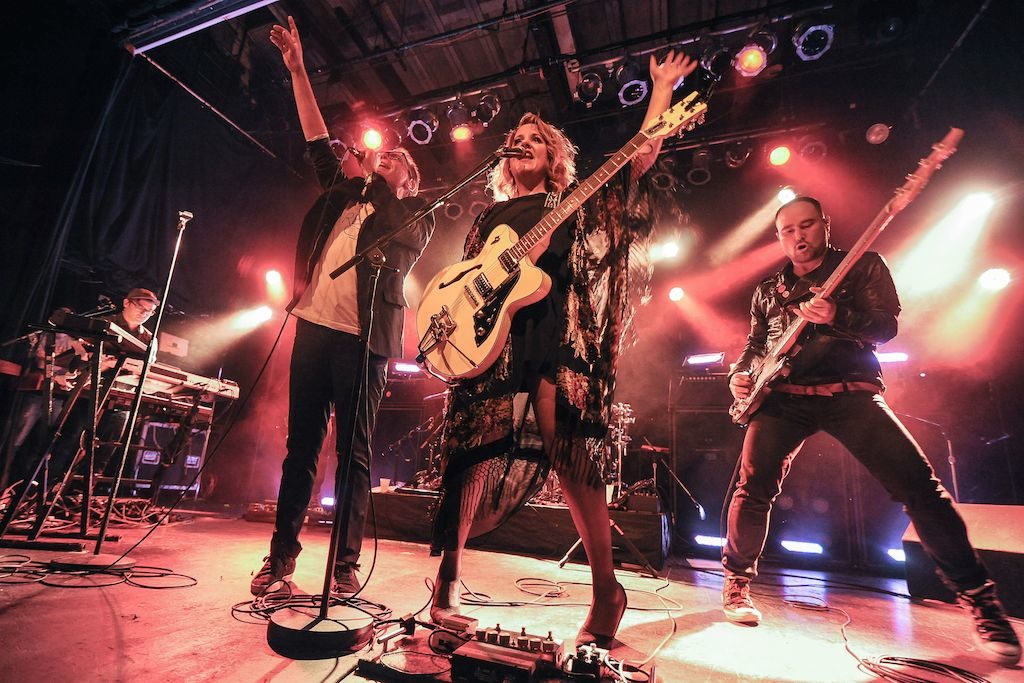 Twenty years ago the Canadian indie music scene was dominated by bands. Talented, groundbreaking groups such as Broken Social Scene, Metric, Arcade Fire and Stars helped defined a generation. It was glorious and they changed the world.

Stars formed in Toronto in 2000, and relocated to Montreal where the launched a celebrated career with eight albums, and numerous Juno and Polaris Prize nominations. The band was on the lookout for something new to celebrate their 20th anniversary when along came Chris Abraham, artistic director of Crow’s Theatre and writer and filmmaker Zack Russell, with an offer they couldn’t refuse at a time they needed it most.

The band is taking on a new challenge with a theatrical concert experience dubbed STARS: Together, running at the Crow’s Theatre until Dec. 15.

“One of the things that keep us going as a band is each other,” says Amy Millan.  “We were at a crossroads, kinda like being married 20 years, and we’re thinking what could we do completely different that we haven’t done, and we just had the good luck of having Chris Abraham, who was interested in doing this project. It was really his idea. He came to us and he is a brilliant, generous, incredible artist.”

The idea became STARS: Together, a theatrical concert that delves deep into the band’s history and peels back the curtain on what’s it’s like to be in the band.

It wasn’t easy considering four of the band members had zero theatre experience.

“It was terrifying. We were all like a dog getting taken to the vet trying to back out of there because it’s so personal and so horrible,” says Milan. “But when you work with people who are as brilliant as Chris and Zack are, and who are taking a big risk, we had to jump into their risk. That’s how we started 20 years ago. That’s what this project was asking of us again, which is also really exciting. To be able to have the opportunity to do something completely different than we have ever done.”

Abraham and Russell followed the band around over a period of a year and combined verbatim dialogue with fantasy to create the unique theatre-concert hybrid.

“I’d been a fan of their music for years, and always marvelled at their ability to tell these beautiful, detailed narratives in just a few short verses,” says Abraham. “Heartbreak, loneliness, love – they tackle big themes in their music, and always make them achingly personal. So I was interested in getting personal with them and learning about the people behind the music. The great surprise is not only were they willing —but they’re also very funny people.”

Stars has long been considered a band that is there for the biggest moments of the lives of their fans. But, with this new show, they are revealing the innermost workings to their fans for the first time. Audiences will meet the band in an entirely new way beginning in their practice space in Montreal in the early days of their fledgeling career.

“There are so many tasty bites. If they’ve ever wondered what it’s like to be in Stars, they won’t wonder anymore. We lay bare what it is to be Stars right now,” says Milan.  “We tell all the stories of what it was to get here.”

Coinciding with the show is the release of the band’s career retrospective, LaGuardia.

Millan thinks the show has a powerful message not just for the long-time fans who will be treated to a new side of the band, but also new fans who will experience their music for the first time.

“I hope what they take away from the show is that vulnerability is power,” she says. “That there is so much power in feeling lost and losing. That the facade of everything we live right now, like how to take the perfect selfie and be your best self is maybe not the most important thing and that to be imperfect is what makes us all so beautiful.”