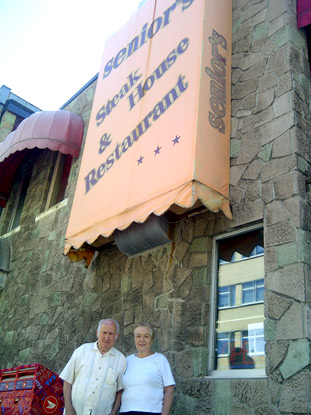 When it comes to Senior’s Steak House & Restaurant, Mary Marlett tends to get philosophical. “Everything has a life span, and nothing lasts forever,” she says. Marlett is the daughter of Eddie and Cathy Marlett, the long-time owners of the Yonge and St. Clair institution, who recently decided to close down the beloved eatery after more than 50 years in business. Their final day of operation is June 23.

The decision to close was a necessary one on account of the Marletts’ age — Eddie is 86, while Cathy will soon be 70 — but that didn’t make it any easier.

“I was writing up a [farewell announcement] to post on the door,” recalls Mary, “and my dad wanted me to add a line saying ‘we might be back someday’.”

It actually isn’t the first time that the Marletts have tried to part with the restaurant. In the late ’80s they sold Senior’s in order to focus on developing a Richmond Hill dining spot. However, when the new owners hit financial troubles and the restaurant faced an uncertain future, the Marletts came to the rescue.

Eddie isn’t the only one having trouble letting go. On account of its quality, good-value food, friendly service and charming, old-school ambience (Mary estimates the last renovation took place in 1969), Senior’s has attracted a large group of loyal customers who don’t yet seem ready to say goodbye. According to Mary, some have begged her not to let the restaurant close, while others have taken a more direct approach — telling her that her family simply can’t close.

Senior’s, which first opened its doors in 1961, doesn’t have anything special planned for a big send-off. Still, that doesn’t make the loss of a piece of Toronto history any less significant.