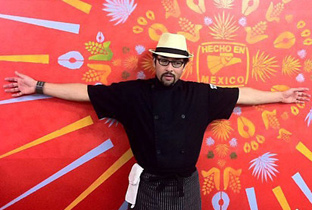 After Torontoist reported that the much-lauded Agave y Aguacate had closed, we got in touch with owner/chef Francisco Alejandri to find out more. Alejandri says that there is trouble going on at the Kensington Market food court at 214 Augusta, and that he and other vendors are no longer operating at the venue. For his part, Alejandri says that ongoing cleanliness issues that were beyond his control spurred his decision to leave.

“It wasn’t clean and organized,” he says. “I couldn’t deal with it.”

Alejandri cited a constantly dirty back patio as part of the problem, along with a host of other issues, although he did say that the food court had recently passed a health inspection.

“I’m heartbroken, but I wasn’t comfortable serving customers in an environment like that.”

Matt Pettit, owner of Rock Lobster Food Co. — which operates a stand at the food court — says he is unaware of any troublesome issues there. He says the food court is currently under renovation, but when it reopens next week, Rock Lobster will be there.

We also got in touch with Abal Aguilar, owner of the adjacent Pancho’s Bakery, who said that “most of the vendors left.” He didn’t say why they had left.

As for Agave y Aguacate, all is not lost. Alejandri tells us that starting in September, he’ll be operating the business on Thursdays out of The Raq on Queen West. The owner there, apparently, has expressed interest in working with Alejandri to eventually fund a new restaurant.

Alejandri will also be dishing up his signature cuisine at the AwesTRUCK event at Evergreen Brick Works on Sept. 9.

Alfonso Segovia, owner of the food court, says that all vendors are responsible for the cleanliness of their own areas. He admits that the food court can get disorganized at times, but he attributes that to a lack of financial resources (he’s trying to keep rent cheap for up-and-coming entrepreneurs). Segovia speculates that Alejandri’s haphazard working hours and other poor business practices were a significant cause of his difficulties at the food court.

Of Alejandri, Segovia says: “He’s passionate about everything, except for the business aspect of running his business.”