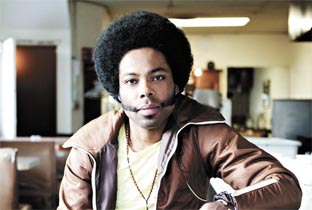 Alex Cuba was born into a musical family in Artemis, Cuba, just outside of Havana. He played percussion on TV as a child and remembers the feeling well. It’s the one he still gets just before he goes onstage.

Hot on the heels of a recent Grammy Award nomination for Best Latin Pop Album and with a growing legion of fans, Cuba is no longer a kid taking his first performance steps. He’s a hot commodity around the world with a huge Next Big Thing sign stuck in his sizable, trademark Afro.

“The way I feel, this is my moment to shine,” says Cuba, on the phone from Las Vegas where he’s performing at the BMI Latin Awards. “It is what I’ve wished for.… And we did it ourselves. It is a very empowering situation.”

Cuba has released three solo albums through his own record label resulting in two Juno Awards for World Music Album of the Year: in 2006 for Humo De Tabaco, and 2008’s Agua Del Pozo. But it is Cuba’s latest self-titled release that has resulted in his growing international fame. When Cuba came to Canada, he was 24, and his dreams did not include pop superstardom. All he wanted to do was bring the bass.

Cuba (real name Alexis Puentes) learned to play guitar when he was six, and switched to bass when he was 14 and started writing his own songs. When he was 17, he sent his dad some songs he had written, and the results tempered his musical dreams. “I wrote my first song, and my dad listened to the song I wrote,” says Cuba. “He said, ‘Oh, I love it. Try this word here and there, but don’t sing. You don’t have a voice. You’re a bass player.’” Ouch.

“I came to Canada with my bass on my back, and my dream was to become some famous bass player.”

Things changed when Cuba moved to Canada to be with his wife, Sarah Goodacre, of Smithers, B.C., whom he met while travelling with his father’s band for a Cuban solidarity concert at Simon Fraser University.

Living in Victoria, B.C., at the time, Cuba applied, as a bass player, to be part of a workshop that was advertised at a local music store. “It cost $85, and I think I had $90 in pocket, so I would run out of money for the week, but my wife says, ‘Ya, let’s do it.’” explains Cuba. “I got approved, you know. And the second day, during a break, I got relaxed or something, asked for a guitar, played for a second, and I started singing.”

The workshop leader heard and asked him to play guitar and sing at the workshop’s showcase concert the next evening.

“It was in a theatre in Victoria, and when I got up and started singing, the whole place stood up and started to cheer. They loved my voice, but I still wasn’t convinced.” Enter the father. After recording an album with his twin brother, Adonis, on which he sang two songs, he sent it back to his father. “He always told me I wasn’t a singer, but one song I’m singing made him cry. He couldn’t listen for about three weeks.”

Convinced of his new path, Cuba didn’t look back. Being squirrelled away in a far-flung corner of B.C. 14 hours away from the nearest major city has afforded Cuba the opportunity to forge his own identity as an artist.

Cuba’s music is a unique cultural hodgepodge of influences, thanks, at least in part, to his leaving the Latin music scene behind and adding a variety of genres to the mix. The eclectic fusion combined with Cuba’s soulful voice make for a moving combination. Add in an Afro that defies description, and it appears to be a recipe for success.