Alexis’ Angels on the move | TRNTO.com
Skip to content 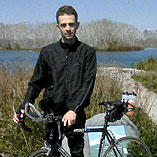 Richmond Hill’s Brommet has travelled the most difficult road a parent can face. In February of 2008, he and his wife Amanda lost their three-year-old daughter Alexis — described as an ever-smiling adventurer and fearless leader — to stage 4 neuroblastoma, a rare and aggressive form of childhood cancer.

Though many would crumble under the weight of such a loss, Brommet says the memory of his daughter’s fighting spirit has helped him forge a new path in his life, donating his time and energy to fundraising for cancer research. Now, as he prepares to cycle the 200 kilometres from Toronto to Niagara Falls in the Ride to Conquer Cancer, he says he knows his daughter will be with him every inch of the way.

“Alexis comes with me every time I head out,” says Brommet. “When it gets tough, she’s there to encourage me. I’m reminded that it pales in comparison to what she had to endure in her short time with us, and that pushes me to be better, go faster and ride longer.”

He says he decided to join the ride, a two-day event benefiting the Princess Margaret Hospital, after watching his father cross the finish line last year — Brommet’s mother is also currently undergoing cancer treatment at Princess Margaret. “It was really being there last year, watching my dad come across the finish line wearing a shirt with a picture of Alexis and my mom,” he says.

And so, only one year after he began his training and purchased his first bike since childhood, Brommet is setting out this month as leader of “Alexis’ Angels,” a team of friends and family joining him in the ride.

Brommet says he has high praise for the staff at the Hospital for Sick Children and Princess Margaret who provided care and support to his family following Alexis’ diagnosis, and he is happy to be able to give back through volunteering.

“The best way to summarize our experience is that they became and remain members of our extended family,” he says. Though training for the ride has been demanding, Brommet says he and Amanda still make the time to act as spokespeople for both SickKids Foundation and the Children’s Wish Foundation.

“In December of 2007, we were provided a small window of time to have Alexis’ wish granted to visit Disney and meet Tinkerbell,” says Brommet. “With the efforts, time and perseverance of the [SickKids and Make a Wish] staff, we were able to spend the most amazing seven days together — as a family free of doctors, nurses, drugs and tests — and, as a result, have the most incredible memories.”

Brommet says as he crosses the finish line, he will honour Alexis by wearing a 14-foot necklace, her “bravery beads,” each bead representing a test, procedure or milestone she experienced during her treatment. He says he plans to continue focusing on fundraising for pediatric cancer and hopes for a future where every child can be cured of this devastating illness.

“Obviously that is a lofty ambition,” he says. “But cancer is a big disease, and with that, we need to have big goals and hopes and, more importantly, big money. I am already thinking about next year’s event in Toronto and possibly the rides that are now being run across the country.

“I would love to have Alexis’ Angels grow to become a tour de force.”