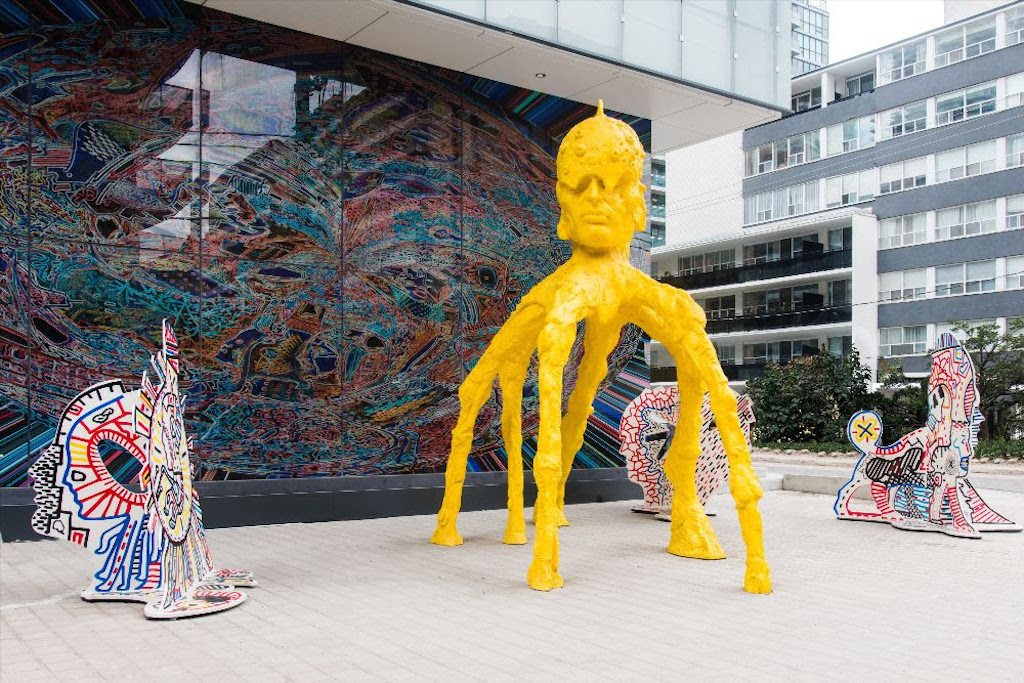 As if 2020 hasn’t been challenging enough, it appears as though aliens have been spotted in the Yonge and Eglinton neighbourhood. Luckily, we have been told these creatures are actually a public art project by Toronto-based art collective Blue Republic and are harmless. So far.

The colourful creatures are located at 150 and 155 Redpath Avenue at the site of the Redpath Condos development. The project principles Capital Developments and Freed Developments commissioned the $1.5 million installations.

The project, dubbed Stargate, consists of blue and yellow creatures each weighing thousands of pounds.

“Now more than ever, people are looking for something positive, fun and colourful. Stargate is one of the most distinct, boundary-pushing public art installations in Toronto,” says Amanda Milborne-Ireland, VP of sales and marketing, Capital Developments. “Its vibrancy reflects the dynamic energy and diversity already here in the Midtown neighbourhood, and we’re so proud to bring these colourful creatures to the base of our residences.”

Blue Republic was founded by Toronto artists Anna Passakas and Radoslaw Kudlinski. They were announced the winner of a national public art competition n 2016 to enhance the evolving Midtown neighbourhood’s public realm.

“Our inspiration for this piece came from the unique diversity of this city. For some, moving to a new neighbourhood is like moving from one universe to another. So many people bring various experiences and cultures with them from all over the world,” says Kudlinksi. “We are both science fiction fans, and we felt that Stargate, drawing from this popular genre, could be the glue between these narratives.”

The characters appear poised to take over Midtown, and we are just not sure if they are up to no good or perhaps they are set to bring some good news our way for once. One of the creatures is a six-legged yellow alien, another a 12-foot electric blue creation.

Blue Republic has been behind several notable public commissions, including pieces at the Luminato Festival in Toronto and the Biennial of Urbanism and Architecture in Hong Kong. Stargate is Blue Republic’s largest and tallest public art installation, as well as their first permanent installation in Toronto.

The installation is meant to create an immersive pedestrian experience.

“As immigrants, we have experienced first hand what many people coming to Toronto experience. We also know there is a huge appetite in this city for engaging public artwork and Stargate is a piece that commands your attention,” says Passakas of Blue Republic.