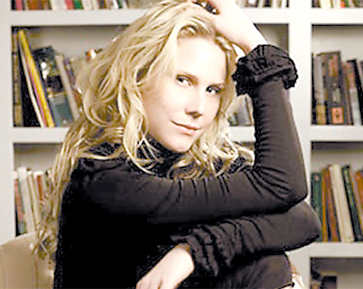 “I WAS A pretty horrendous student,” admits Amy Foster, whose debut novel, When Autumn Leaves, appeared on bookstore shelves last week. Not that her parents, award-winning composer and producer David Foster and former rocker B. J. Cook, set a shining example when it came to academics.

“My dad quit school when he was 16 to play with Chuck Berry in London. My mom quit school when she was 14 to sing, so academics were not a very important part of my life growing up,” she says.

Foster, 36, spent most of her high school years at Branksome Hall, then did her Grade 12 year at Jarvis Collegiate before finishing up at Northern Secondary.

“What Branksome gave me was a lot of stability and a lot of structure. It taught me selfdiscipline,” she says, “because that was stuff that was not that important in my household.” In that sense, at least some of the credit for writing When Autumn Leaves must go to Ms. Roach, the former headmistress at Branksome.

“She was this incredibly strong, domineering woman who in one moment could scare the pants off you — or the bloomers, because we had to wear bloomers under our kilts — and in the other moment, be so kind and generous and say just the right thing to motivate you. She was pretty fantastic,” she says.

Foster’s novel takes place in the fictional British Columbia town of Avening, a magical community where Autumn Avening, a woman with a mysterious gift, must leave her enchanted community and choose a suitable replacement.

Foster is also known for her talents as a lyricist, having written for Josh Groban, Diana Krall, Destiny’s Child and Andrea Bocelli. Her most successful work to date was providing the lyrics for family friend and fellow Canuck Michael Bublé’s hit song “Home.” More recently, she cowrote “Haven’t Met You Yet” for Bublé’s new album, Crazy Love. The track debuted at number one on the adult contemporary radio charts.

Not bad for a kid who admits she was a bit of a terror in high school. So what would Ms. Roach have to say about it all? “I’m sure she’d be very pleased, especially because I wasn’t a very good student and got into trouble.” says Foster. “Maybe she knew I had it in me all along.”