Alobar is a must-visit — but good luck getting a table | TRNTO.com
Skip to content 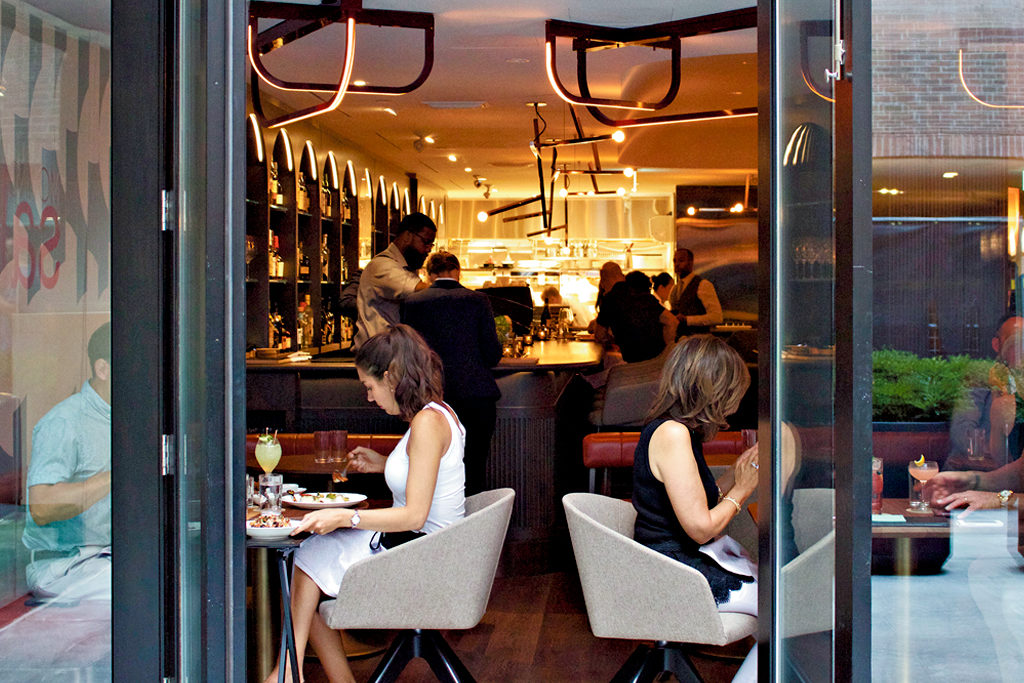 Do I seem like a whiner to you? A passive sort of person, who lets life pass her by or allows people — both personal and professional — to ignore her? Really? Guess again. If anything, my personal growth goals would have more to do with becoming less of a control freak.

So when I complain about how hard it is to score a hot table in Toronto, bear my machismo in mind. I am no shrinking violet. And yet I am struggling terribly with the Toronto restaurant reservation madness.

It’s been that way in New York for decades. Maybe they just have more practice. It’s frustrating there, but at least it’s pretty easy when you know the ground rules. For example, my favourite NYC resto, Esca (Italian seafood), says this on their Reservations page: “Reservations are accepted up to one month in advance to the numerical date.” Fair enough. I don’t like it, but I can work with it.

Try getting a table at Alobar Yorkville, the Alo people’s third resto. I spent a month trying to get a res, and finally copped one for a Tuesday at 5:45 p.m. Nothing later available, and no mention on the site of when they release a new batch. But they did say on the site that they hold a few tables for walk-ins. So we walked in at 5:50. Now here’s the part they don’t tell you. When we walked in, they said it’d be about an hour to get a table, and they’d text us when it came up. That worked. Woulda been nice to know up front.

It’s a smooth glam room down a little Yorkville lane, all clean lines and shades of brown and black, with undulating neon light fixtures in amber, and clever bevelled wood-grain tables. The ceiling is low and most surfaces hard, so expect noise. That is, if you score a table. 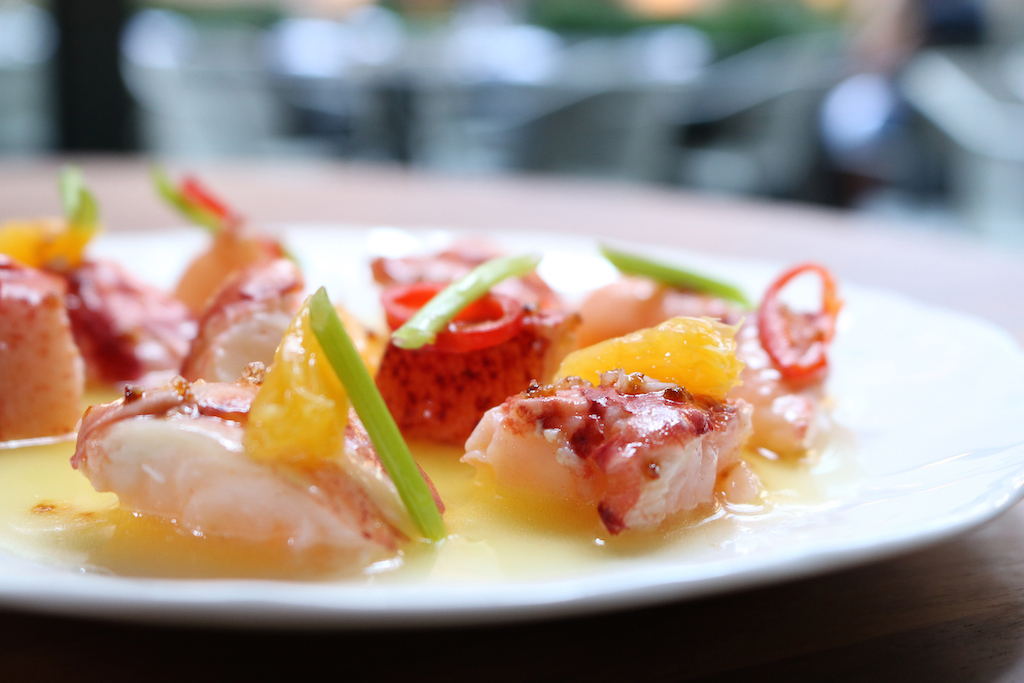 Like chef Patrick Kriss’s masterwork, Alo, and his informal little opus Aloette, Alobar is a triumph of gastronomy. It’s obviously less formal than the prix fixe Alo, and more so than the burger ’n’ frites Aloette. Alobar’s lineage traces right back to Roger Vergé and Georges Blanc, two of the great Michelin three-star chefs of France. This thanks to Patrick Kriss’s three years as chef de partie at Daniel, chef Daniel Boulud’s flagship in New York. And who trained Boulud? Vergé and Blanc.

I’ve eaten both Vergé’s and Blanc’s food: Sublime. To weep for. Butter? Truckloads!

So we know where Kriss gets it. And we love it. His shrimp and grits is a magnificent throwback to Acadia, where he cooked the food of the low country. Cheddar melting with buttery silken grits and lightly charred shrimp: Heaven! His raw sea bream is melt-in-the-mouth, its sweetness cut by yuzu and tempura. This is almost as good as the (much more expensive) sea bass crudo at Buca Yorkville. Smearing whipped roasted garlic butter on warm Parker House dinner rolls goes with the sea bream like a Maserati goes with a pair of Manolos. 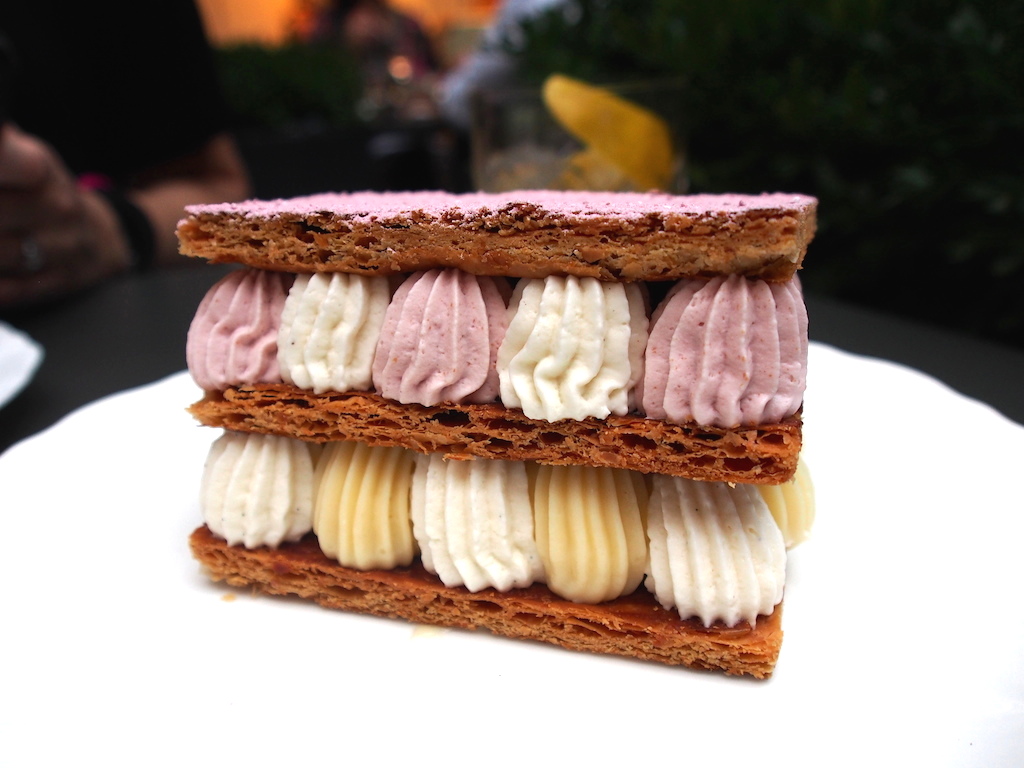 Small dessert menu, one standout: Mille feuille raspberry chantilly. Dinner composed of the raw sea bream and this extravaganza would be as good as it gets. Constructed at the last minute to prevent sogginess, it is super-crisp puff pastry layered with pretty-as-a-picture fluted balls of whipped cream and raspberry-flavoured whipped cream with a layer of just-melting unsweetened frozen raspberries for cool tang.