Where to get Amy Rosen's addictive new chocolatey spread | TRNTO.com
Skip to content 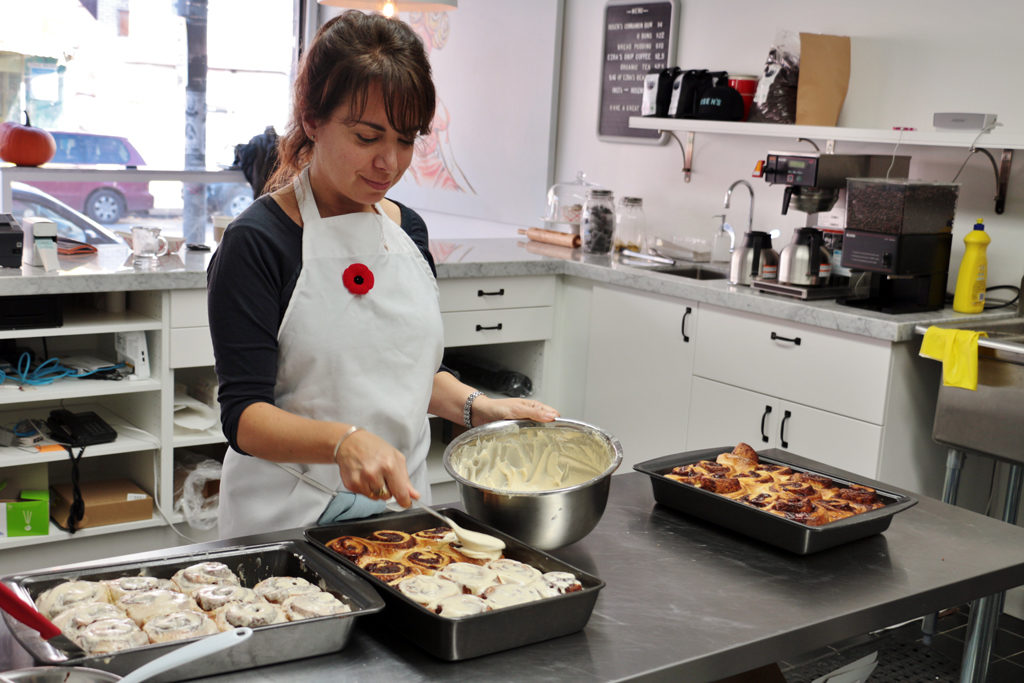 “Many people tell me they eat it straight from the spoon. To be honest, that’s what I usually do,” Amy Rosen said, dishing on her latest spread to hit the shelves this year.

The journalist-turned-cookbook author recently released her third product, Rosen’s Babka Spread, a complementary spin-off of the decadent Rosen’s Cinnamon Bun Spread that’s been a hot topic at the breakfast table since it launched back in autumn 2016.

After several years of sweet success, Rosen sold her College St. storefront and came up with the idea of creating the concept of “bake-your-own Rosen’s Cinnamon Buns,” which launched September 2019. The cinnamon buns are sold frozen, allowing consumers to simply heat, serve, and enjoy from the comfort of their own homes.

Much like the cinnamon bun spread, Rosen’s Babka Spread is rich, caramely, and decadent, but now, there’s a hint of chocolate buried amid the cinnamon swirls.

“The chocolate-cinnamon combo fills the void I had been feeling with our chocolate-free cinnamon bun spread. I like cinnamon but I love chocolate, and everyone knows that chocolate babka is the best babka,” Rosen said. “So I thought, ‘wouldn’t it be cool to turn your toast into a slice of chocolate babka?’ Basically, I’m in the business of turning toast into pastries.

While sweet treats like waffles and pancakes are a no-brainer for a little dollop of chocolate cinnamon goodness in a jar, Rosen says she’s already seen the spread being used in a series of unconventional ways.

“People have used it in ways I hadn’t considered, like swirled into cookie batter and buttercream frosting, and made into macarons and palmiers,” Rosen shared. “It’s great warmed over ice cream too.”

Just like the original Rosen’s Cinnamon Bun Spread, the new chocolate babka spread is made from natural ingredients and is nut-free.

“I love coming up with new products that I’ve never seen before, and I think the babka spread is one such item,” Rosen shared. “It’s deeply chocolate-y with a cinnamon left hook; just really delicious and pretty enough to be gift-worthy too (also hoard-worthy). I also hope it piques people’s creativity. After all, peanut butter was once just schmeared into sandwiches, but look at it now!”

All of Rosen’s spreads are available at spots like Pusateri’s, Eataly, Summerhill Market, Lady York Foods, The Mercantile, Cumbrae’s, Brodflour, Prairie Boy Bread and others. While not all locations in the city have the babka spread just yet, Rosen promises that most should soon, as she continues to work with a Canadian broker to distribute the spreads nation-wide. Currently, Torontonians can also order the chocolate babka spread from Rosen’s distributor, saltgourmetfoods.ca.

By the end of October, Rosen’s Chocolate Babka Spread will be listed on Amazon, enabling her to expand her distribution into the U.S.

“During lockdown I signed on with a food broker down south — I suppose this was my pivot — and stuff is already starting to happen in both retail and food service,” Rosen shared. “They want me to come up with new products every year, so yes, more delicious spreads and baked goods to come. How do we feel about babka monkey bread?”

Rosen’s new spread is also stirring up excitement on a local level – Barocco x Nino, an Italian bakery and cafe on College St., just signed on with Rosen as a supplier, and is officially selling her chocolate babka and cinnamon bun spreads. The cafe will also serve cinnamon bun lattes, and bake Rosen’s Cinnamon Buns fresh in-store, just like Rosen’s storefront used to.