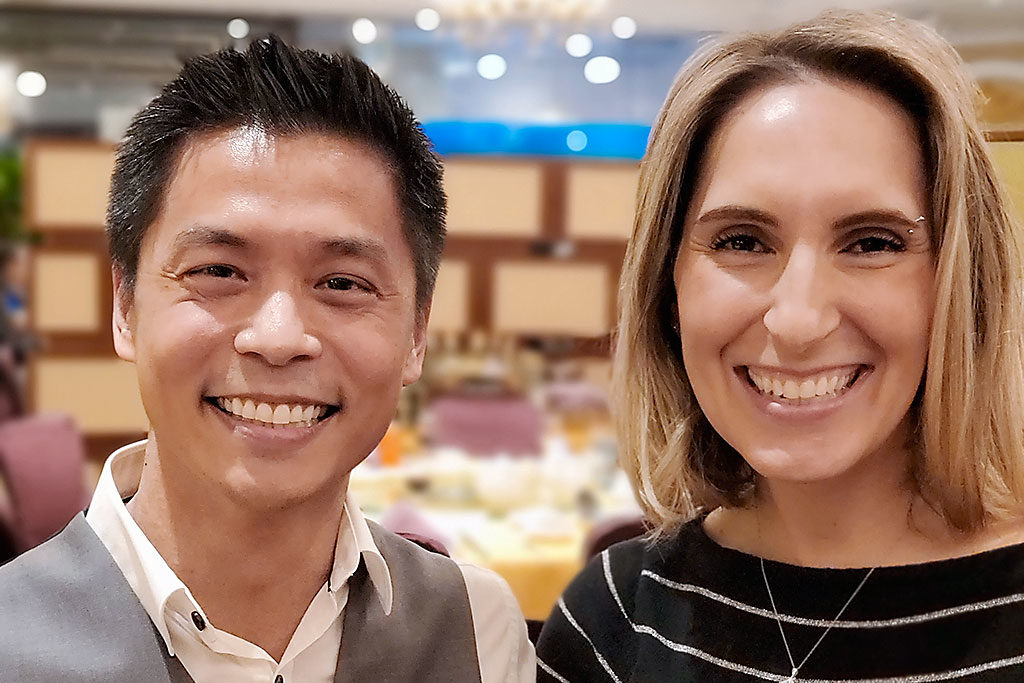 Andrew Chang moved to Toronto, when he became the co-host of CBC’s The National, and brought his wife Caro and two kids along with him. After bouncing around a few ’hoods, they chose Yonge and Eglinton as their own. Here he dishes on how their love story began.

Caro and I met at a chemistry party — no joke! She was pursuing her master’s in chemistry. I was a junior reporter at CBC Montreal. Not exactly overlapping social circles, but we had a mutual friend. That night, I remember plopping down on the couch, joining a game of cards and sharing my hand with a woman whose smile could fill a room. We were scooched in nice and tight.

Our first date was later that night: we ducked out to shoot some pool. She grew up speaking French at home, so I spent a good chunk of the night trying to impress her with my own French. Except I was running a big bluff. My vocabulary was terrible back then, but I have an absolutely impeccable accent when speaking in short bursts. “Oui, bien sûr, j’chouis à l’aise en français!” Needless to say, she was very impressed (and my French eventually got much better).

One of our more ambitious camping trips was a three-day portage in the Adirondacks. The problem: a couple of days earlier, I contracted a nasty stomach bug in hospital, which only started to hit me after we’d already crossed a few lakes. I was completely incapacitated. She managed to get us back to civilization virtually on her own — setting up and tearing down camp, making meals, lugging gear and all that paddling! I still think of her as my superhero.

I wanted to propose by a small lake at Mont Tremblant, except I was so nervous we ended up walking the entire circumference of the lake. Like we actually ran out of lake. I think at this point she wanted to head back to the village and get on with our day, but I insisted we keep walking. She must have been so confused. Fortunately for the both of us, I eventually summoned the courage to drop to one knee and ask the most important question of my life. Her answer was perfect.

Our wedding was in Montreal at the Museum of Fine Arts, in a beautiful glass room overlooking the city — and was more of a party than a wedding. We honeymooned in Hawaii: (on) Big Island and Maui. It was the best trip of our lives. We swam in the ocean with dolphins, hiked for hours to roast marshmallows on flowing lava and almost got swallowed whole by manta rays. The mai tais and pineapple were pretty good too.

Two smart, beautiful, devilish little girls: Arianna is five, and Chloé is two. I think of them as my little ninjas: I encourage them to climb and jump on almost anything and everything in our home. Life’s just one big obstacle course anyway, no?

My days are pretty long — my first meeting is at 9:45 a.m. and I don’t get home until close to midnight — so we find time where we can. It helps that we share so many interests and friends, but I think a good rule of thumb is to always be thinking of the other person first. Be understanding. Everybody wins.

Everything! And the interests we don’t share we usually end up sharing eventually. We try to have an open mind that way: camping, canoeing, hiking, snowboarding, music, gaming, you name it.

We just bought a two-bedroom condo near Yonge and Eglinton. Yonge and Eg just seemed like the perfect mix of hustle and bustle, interesting places, great eating and family friendliness.

Probably doing a lot of hiking or doting on grandkids or playing board games or snuggling in a log cabin somewhere. Or all of the above.

Catch Andrew Chang on The National weeknights at 10 p.m. on CBC.