Andy Bichlbaum of The Yes Men is coming to T.O. tonight. In celebration, five of The Yes Men’s best hoaxes | TRNTO.com
Skip to content 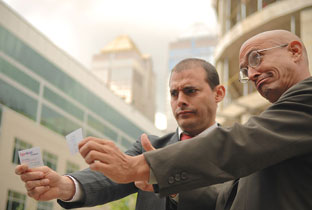 If you’ve ever wished you could do a little something to fix the world, you have a chance to learn from The Yes Men‘s Andy Bichlbaum at OCAD tonight. For the uninitiated, The Yes Men is a prankster collective — led by Bichlbaum and Mike Bonanno — that pulls off fantastic hoaxes in order to shame big businesses and government entities. Below, five of The Yes Men’s best moments to date.

1. In 1999, as thousands of activists headed to Seattle to protest the World Trade Organization, The Yes Men created a fake WTO website full of satirical content. Unexpectedly, the website earned them invitations to speak, as WTO representatives, at a conference in Salzburg, Austria. So they went and had their say, declaring to an audience of “experts” that political votes should be auctioned off to the highest bidders.

2. In 2004, on the 20th anniversary of the Bhopal catastrophe, Bichlbaum convinced BBC World News he was a Dow spokesperson, went on television and said: “I’m very, very happy to announce that, for the first time, Dow is accepting full responsibility for the Bhopal catastrophe.” The broadcast was watched by 300 million people, and Dow’s stock briefly lost more than a billion dollars.

3. At a 2006 post-Katrina housing summit in New Orleans, Bichlbaum, in the guise of an “assistant under-secretary” of the Department of Housing and Urban Development, with the mayor at his side, informed an audience full of expectant real estate developers that, instead of tearing down public housing, undamaged public housing facilities that had been closed since Hurricane Katrina struck would be reopened for former tenants to occupy.

4. In 2007, posing as ExxonMobil and National Petroleum Council representatives, The Yes Men delivered an outrageous keynote speech to 300 oilmen in Calgary at GO-EXPO, Canada’s largest oil conference. They proposed that cadavers remaining after environmental disasters could be converted into a fuel called “vivoleum.”

5. During the 2009 United Nations Climate Change Conference in Copenhagen, The Yes Men put out a statement claiming to be from Canadian environment minister Jim Prentice that pledged, rather exorbitantly, to cut carbon emissions to 40 per cent below 1990 levels by 2020.