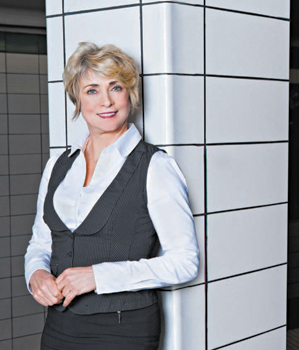 “YOU’LL SEE THEY do this behind shot, so I always have to clench my cheeks,” Ann Rohmer says seconds before the camera pans across the CP24 studio on Queen Street West and a glimpse of her backside is momentarily displayed on TV screens across the city.

Sporting a white blouse, black dress pants and heels that are too high to be comfortable, Rohmer has just finished the day’s edition of CP24 Breakfast, which she anchors alongside co-hosts Melissa Grelo and former MuchMusic VJ Matte Babel.

At 53, the blue-eyed news anchor really has nothing to worry about — no matter the camera angle — as years of working out, avoiding the sun and good genes are all working in her favour.

“In one word, she is our rock,” Melissa Grelo says of Rohmer, from her desk in the back of the studio. “She just brings with her years of credibility. We’re a very young show, [and] we know that our demographic skews a little younger on CP24; however, we can’t forget Ann’s history in the morning-show world.”

In the late ’70s, Rohmer got her start in the TV business. During university, she was in a longdistance relationship, and as a means of paying for flights and for phone bills, she started acting. While she loved being onscreen, she found herself wanting to edit and improve the scripts.

“So I thought: ‘Where can I go with this thirst for knowledge and desire to write but also to present?’” she says.

It’s hard to imagine Rohmer as anything but a veteran host, but being comfortable onscreen didn’t come easily to her. She recalls botching several auditions along the way, including a particular incident during which her microphone had to be removed from her lapel because her voice was being drowned out by the sound of her racing heartbeat.

“Live TV can be very scary, especially the auditioning process,” she says. “I like to think that I’m strapping the audience in right beside me. Fasten your seat belts, here we go, you’re with me. We’re going to enjoy this or go through this journey together.”

In 1979, she hosted a weekly segment show called Showbiz, where she interviewed celebrities. It paid a measly $100 a week, which meant she had to move back into her parents’ house, but it was all worth it because she knew she was on the right track.

What followed was “the big turning point” of her career: a job on the magazine style show That’s Life. Her co-host on the show, Peter Feniak, remembers her for creating quite a commotion.

“She was the auditioning female host that everyone talked about. She seemed to have it all: looks, brains, energy, a real authority and the ability to connect on-camera. But people were saying she was too young,” he says.

For four years, Rohmer and Feniak, who remain friends to this day, were dispatched across the country and to international locations before Rohmer went on to become a sports anchor for CBC. After two years on Canada AM as a features reporter, she began her first foray in the morning-show world as the original host of Breakfast Television, in 1989, where she stayed until moving to CP24 in 2001.

Her latest show, CP24 Breakfast, launched this past March and airs weekdays from 5:30 to 9 a.m. But when the show wraps, Rohmer’s day is far from done. She stays behind the news desk for NewsFlow and returns alongside Stephen LeDrew for CP24 Live at Noon before heading home for a nap. Then, two nights a week, she’s back in the studio to host Animal House Calls on Tuesdays and Hot Property on Fridays. Finally, once every three months, she also tapes the financial show On the Quarter.

Just how does she keep it up? “I’m influenced by these beautiful young women that I get to work with every day on CP24 Breakfast,” Rohmer says. “They bring this kind of energy and this style to the show that I really kind of embrace. So they keep me young and I appreciate it.”

Rohmer, who has been married three times but is currently single, says it was the beauty of the lower Village neighbourhood that first attracted her to the area.

“I love to walk around the Village area and see the beautiful houses, the gorgeous architecture, the terrific landscaping and see how other people live,” she says. The time she spent with her Jack Russell terrier, who passed away last year, also remains dear to her.

“Walking Lucy in Winston Churchill Park, that has to have been my fondest memory. That’s where all of her walks took place,” she recollects.

Since none of the shows has a wardrobe budget, Rohmer picks out her own outfits and does her own hair and makeup, sometimes adjusting it during commercial breaks and voice-overs. But when it comes to cut and colour, once a month, she leaves it to the professionals in the Village.

“I go to a place called Village Beauty Studio, and I’ve been going there since it opened,” she says. “Jenny does my hair, and that’s a big draw for me. I could go anywhere in the city, but she’s fantastic and I love the atmosphere.”

For Rohmer, the hardest part of anchoring live news is maintaining her composure when sad and shocking news unfolds.

Away from the set, Rohmer is a bit of a homebody, she says.

“I’m quite shy. I’m not shy on television, because I kind of grew up on television, but I’m very shy in front of big groups of people because I’m afraid they’re going to find out just how boring I really am,” she says. “Maybe that’s why I like to go to movies: you’re with a crowd, but you’re not the centre of it. The lights are down, and you can just blend in.”

Plus, no one’s staring at your behind.