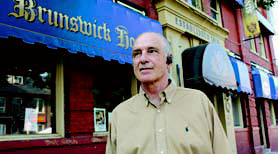 A RECENT SHOOTING in the Annex was a “random, stupid thing,” according to the head of a local residents’ association.

On July 26, 23-year-old Sebastian Herrera of Toronto was shot during a robbery in the alley behind the Brunswick House, at 481 Bloor St. W. Herrera later died in hospital from his injuries. “I don’t think this is the beginning of the end for the Bloor-Harbord Village area at all,” said Rory “Gus” Sinclair, chairman of the Harbord Village Residents Association.

Sinclair has lived in the area since 1990. Over the last two-and-ahalf years, Sinclair and his association have had three public meetings with the Brunswick House to discuss resident concerns with the establishment, including neighbourhood vandalism, public intoxication and, most importantly, Sinclair said, noise concerns. “Your right to make money does not trump a person’s right to sleep in his home at night,” Sinclair said.

Coun. Adam Vaughan said that, while he thinks the shootings are random, the circumstances surrounding them are not.

“While the shootings themselves may be high profile, and very scary and things you take seriously, they happen in the context of a nightclub scene that’s trying to emerge there,” he said.

“The trouble with the Brunswick House, and the impact it’s having on that neighborhood, as well as a couple of other bars, is that people feel very scared,” Vaughan said.

A meeting to discuss concerns with the Brunswick House will be held Sept. 9. Calls to the operator of the bar were not returned.