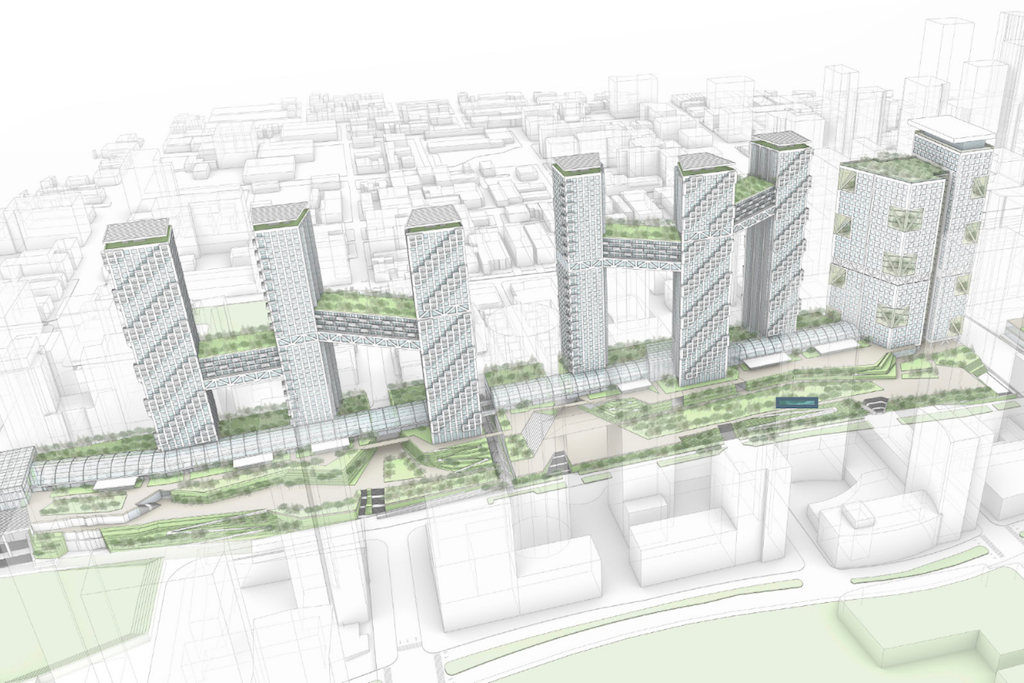 World-renowned architecture firm Safdie Architects is now attached to a proposed development at Union Station Rail Corridor — the same location where the city hopes to create its Rail Deck Park.

The development, called The ORCA Project, is a mixed-use complex with 10 residential, retail, and office buildings as well as green space across over 380,000 square metres.

The ORCA Project is not a new idea. It was proposed for the existing active rail corridor south of Front Street between Bathurst and Blue Jays Way in 2017 but was turned down by City Council in January 2018. That ruling has been appealed to the Local Planning Appeal Tribunal (LPAT), which will hold a nine-week hearing beginning in November 2020.

In the meantime, Safdie Architects has been added to the project and has submitted — along with PWP Landscape Architecture — a revised concept plan to the city in March.

The new vision includes two additional towers for a total of 10, with eight of those designated for 3,500 residential units that will vary from studios up to three-bedroom units. Retail will also be incorporated into a three-level podium that will sit at the bottom of six residential towers and face Front Street. The towers will be laid out in a zig-zag pattern to aid light, views, and privacy.

The six residential towers above the retail podium will rise to 46-storeys and be split into two groups of three, with each triplet connected by a five-storey bridge that will feature both residences and amenities.

While the city has designated the Union Station Rail Corridor’s airspace as parkland, P.I.T.S. Development Inc., a consortium of CRAFT Development Corp., Kingsmen Group Inc., and IDR Developments, have tried to fight that designation. It appealed the 2017 parkland designation decision but lost in July 2019 after LPAT noted the importance of creating new park space.

The new proposal does include 45,000 square metres dedicated to open space, but still does consist of large buildings.

Safdie Architects was established by Moshe Safdie in 1964 and created Habitat 67, a head-twisting collection of small rectangular units that was created for Montreal’s World Expo but still stands today. Since then, the firm has worked on notable projects across the world, including Singapore’s Marina Bays Sands Resort, which features a long whale-like horizontal structure resting atop three towers.