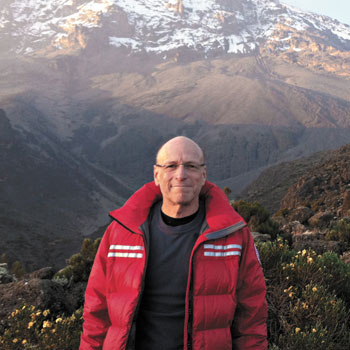 Emergency room doctors are trained to keep cool during the most stressful of situations, and local doctor Howard Ovens had his fair share of them while serving as the chief medical officer on the Summit for Sinai last month. The 10-day journey saw two doctors and 13 participants scale Mount Kilimanjaro in support of Mount Sinai Hospital. Altogether, the charity climb has raised $1.3 million to date.

The journey started off quietly, but on the fourth day the participants found a six-year-old boy who had been wandering the mountain, lost and alone, for three days. When Ovens arrived on the scene (he hung back with their slowest climber), the child was dehydrated, hungry and cold. He only spoke in single words, but said his name was Emmanuel, he was from a town called Moshi and was cutting grass for his family’s livestock when he got lost. Once Dr. Ovens and his colleague Dr. Bjug Borgundvaag had treated the boy, a porter set out to take him home.

But the drama didn’t end there. The day before reaching the summit, a group member fell extremely ill. He couldn’t breath. Even after some rest, his condition continued to decline so Dr. Ovens, again, sprang into action.

He stayed behind and treated his companion while everyone else reached the summit: “There was no doubt in my mind about what I had to do, so there wasn’t a moment’s hesitation.”