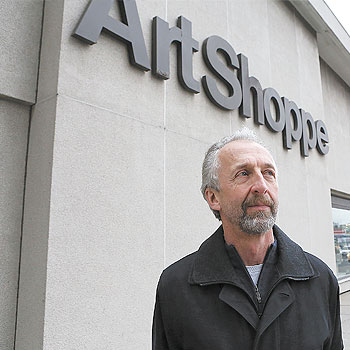 The conflict over a large, two-tower development in the place of the Art Shoppe in midtown may become a full-blown battle at the Ontario Municipal Board (OMB).

“The developer is ignoring all urban planning principles just to make a buck,” said Coun. Josh Matlow. “We simply can’t let that happen, so we need to figure out our best option.”

Freed Developments has applied to build a 38-storey north tower with a top-storey restaurant, a 29-storey south tower and a common six-storey base at Yonge Street and Hillsdale Avenue. The Art Shoppe would be demolished.

“We obviously believe that our proposal is not out of place for this site. We believe it is a good area to add density and intensification and the city does, too,” said CEO Peter Freed.

“The developers are asking to damage city planning law.”

Freed built several large towers in the city’s Entertainment District, such as 500 Wellington St. W., the Thompson Residence and the Fashion House.

“We always try to work with communities and avoid the OMB process. We’ve done close to 20 projects, and the vast majority have not gone to the OMB,” Freed said.

The OMB has tended to side with developers, which is one reason why some councillors, such as Matlow, are fighting to remove Toronto from its jurisdiction. Going to mediation would likely mean both sides will need to compromise.

“We don’t want large towers, but we would be willing to work with mid-rise buildings,” said Matlow.

As for the residents, the choice seems simple. “The developers are asking to fundamentally damage city planning law and to create something that clearly goes against the neighbourhood structure,” said Michael Visser, a long-time resident in the area. “I wouldn’t consider moving if this went through, but I suspect some of the people who are immediately adjacent to it might.”