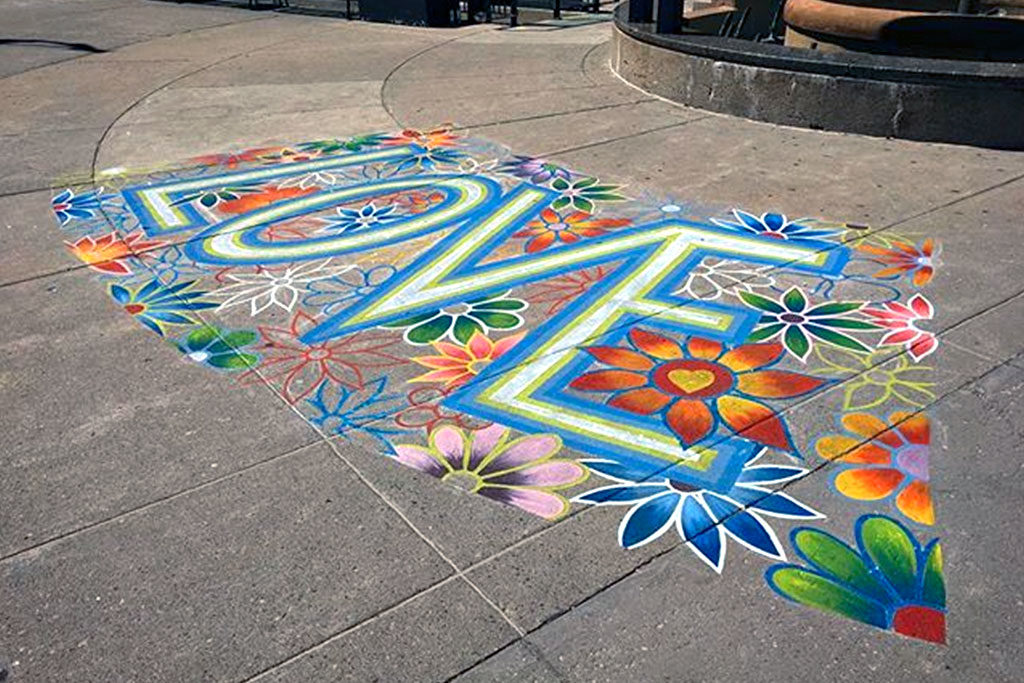 There’s a new addition to the North York memorial for the victims of the van attack: large, psychedelic splashes of art, in the form of the word “Love,” written in Farsi, Korean, French and English on the sidewalk.

The artist is Victor Fraser, a 47-year-old street artist who seems to make a practice of tagging sites with messages of peace and unity, soon after tragedy hits.

He was in Humboldt, Sask., just last month, painting the words “Humboldt Strong” outside their city hall as a tribute to the victims of the Broncos bus crash. Most recently, he was in his childhood neighbourhood in Toronto.

“I went to Spring Garden Public School and Churchill Public School,” said Fraser. “It was not only our city, but it was also a neighbourhood that was very dear to me.”

He currently has seven murals around the van attack memorial site, as well as Mel Lastman Square, and he intends to do smaller pieces along the path of the van.

“These are the people that after the flowers and the cameras [leave], they live in the neighbourhood,” he said. “It’s not something that’s going to go away for a very long time for many of these people, who look down from these highrises, who spent that day terrorized, wondering, ‘Is that somebody I love down there?’ ”

While he was painting in North York, a father and his kids approached him, and they exchanged cheeky small talk. Fraser joked with the children, and he discovered they were on their way to catch a flight home to Calgary.

“I said, ‘Well, safe travels, guys, and keep an eye out for aliens if you get the window seat,’ ” he recalled. The family turned out to be the son and grandchildren of Dorothy Sewell, an 80-year-old victim of the attack. They were in town for her funeral.

Incidents like these keep Fraser going. At 26 years old, Fraser was diagnosed with a form of arthritis, which began in his hips and has been travelling up his spine.

“It’s ironic that I’m drawing [bending] forward,” he said. “I know people who are at my point of life and they’re bent fully forward like a broken coat hanger.”

He was told by the doctor that he would be in a wheelchair by 50 and that he would lose his vision. However, he still works as much as he can, with the valuable time he has left.

“There will be a time where I’m not able to do this anymore,” he said. “And it will be emotionally crippling because it’s so lovely to be outside and have kids freak out [over my work] and that whole interaction.”