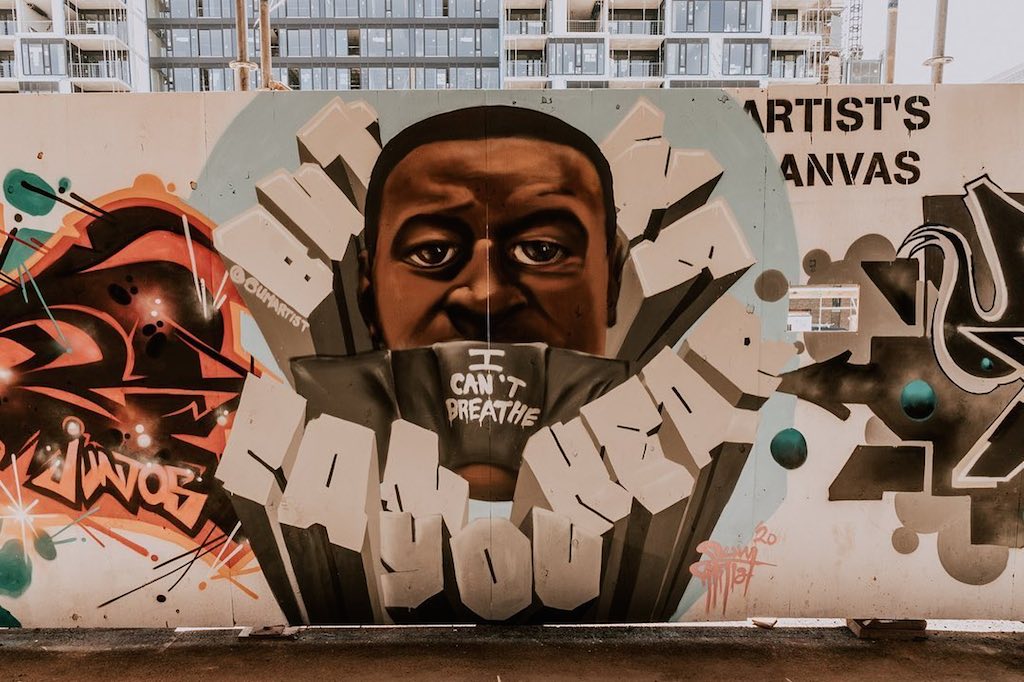 Dozens of street artists from across Toronto gathered in Graffiti Alley on Saturday in an effort to help end racism and show support for the Black Lives Matter movement.

Floyd was killed in Minneapolis on May 25 by an officer who had pinned him down and held a knee to his neck for nearly nine minutes. His death set off a chain reaction of protests and public outrage in the U.S. and around the world.

“It was great to see something that evolved from a group chat a couple days prior to the event, to over 40 artists painting with no funding, or budget, or schedules,” said Pacho. “It was really an organic, guerrilla-style takeover.”

The names of Black men and women who lost their lives in 2020 were painted onto the walls for posterity. A mural memorializing Breonna Taylor — a 26-year-old woman who was killed by Kentucky police in March — was put up. While another portrait of Regis Korchinski-Paquet — a 29-year-old woman who recently fell to her death from a balcony in High Park while police were on the scene — can also be found nearby.

Nick Sweetman, one of the event’s co-organizers, said the initiative gave Toronto artists the opportunity to use their platforms in an important way.

“People came out of the woodwork to be a part of this,” he said. “Young and old, Black and white, and of every race.”

And while street art may have been their chosen medium, Sweetman stressed the importance of heeding the message behind the paint.

“The art is amazing … but we shouldn’t lose sight of the fact that this is really about societal change and addressing systemic racism.”

The group also worked to raise funds for different Black organizations across Canada, including the Toronto Protestor Bail Fund, the Black Legal Action Centre, and the Toronto chapter of Black Lives Matter.

Looking back on the event, the group said they couldn’t have asked for a better turnout.

“Graffiti is often associated with negativity, and vandalism and gangs and Saturday’s event really proved the polar opposite of that,” said Pacho. “It’s special in that way.”