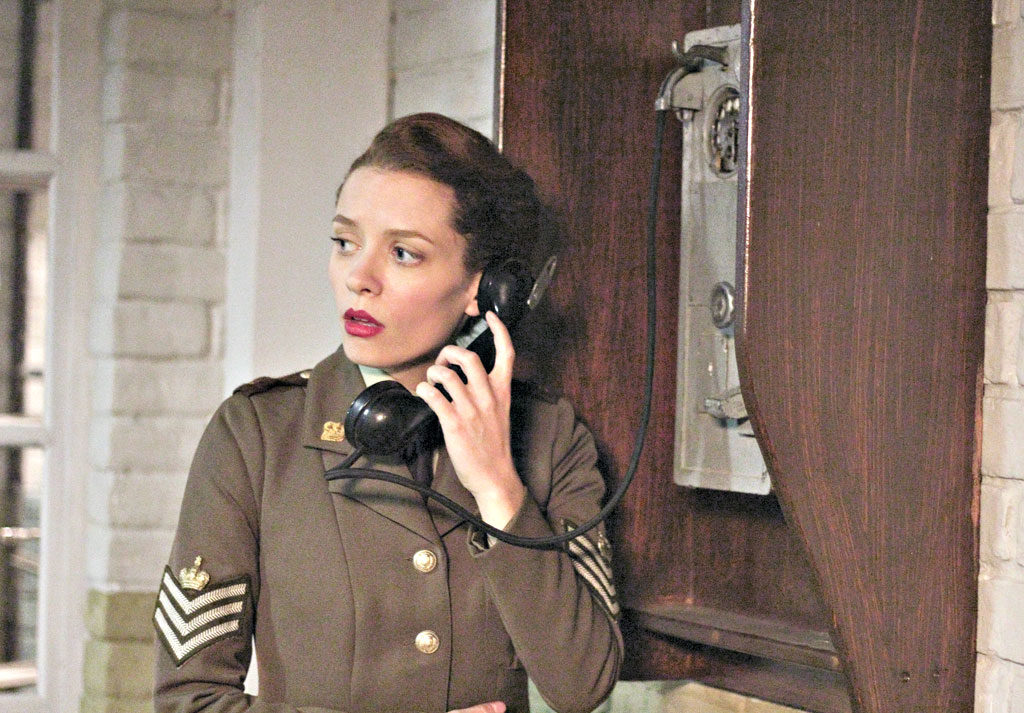 Toronto actress Lara Jean Chorostecki jumps between centuries and famous periods in history more often than Keanu Reeves in Bill & Ted’s Excellent Adventure. And, dude, she is most excellent.

The young Toronto actress with the killer red hair and a solid background in classical theatre, including a meaningful stint at the venerable Stratford Festival, has put her training to good use hopping throughout history in a variety of TV period dramas.

In 2011, it was back to the fifth century in the TV series Camelot, playing Guinevere’s lady-in-waiting, Bridget. Two years ago, she’d moved ahead a few centuries to 1860s New York City for the role of Sybil O’Brien in the BBC’s Copper.

Now, the Brampton native has landed squarely in the 1940s for her new role as “motor-mouthed” Krystina Breeland in the smashing new CBC-TV spy series X Company.

“I love period dramas of any kind. It’s kind of been my career with various roles over the years, but I’ve not really done the 1940s before,” says Chorostecki, on the phone from her part-time home in Los Angeles. “It’s been really exciting to be able to tell that story.”

X-Company, a drama that premiered last month, tells the little-known story of Camp X, a secret school for spies that was located just outside of Toronto on Lake Ontario. Five young recruits — Canadian, American and British — are thrust into this world of intrigue and espionage, carrying out missions for the Allies in Europe.

“Krystina is a really unique and strong, yet sensitive individual who cares deeply about her job,” she says.

Chorostecki has a number of family members in the service, including a brother who works in intelligence. So, her research began with a phone call.

“He knew exactly what Camp X was,” she explains. “He said anyone in intelligence in the Canadian military are made aware of the spy training that took place in the Second World War.”

The show is shot in Hungary, and the European location allowed the CBC to draw from a greater pool of talent in casting the lead roles, including doe-eyed British actor Jack Laskey as Alfred Graves.
In addition to her role on X Company, Chorostecki is eagerly awaiting the summer premiere of the third season of the psychological TV thriller Hannibal, on which she portrays the decidedly amoral crime blogger Freddie Lounds, who runs a true-crime website.

The role was originally written for a man and portrayed by the late, great Philip Seymour Hoffman in the feature film Red Dragon.

Her portrayal has thrust the young actress to the cusp of stardom south of the border, along with the associated Freddie Lounds tribute, Tumblrs and social media attention, at a level far beyond us modest folk up here in the north.

“I’ve learned a lot about Twitter, Tumblr, Facebook. I hadn’t really been a part of that before, and I’ve really enjoyed it,” says Chorostecki, who says getting recognized on the street is also a new experience.

“It adds a whole new dimension.”

“I fell in love with wanting to know more about human beings and the human condition,”

Although acting is acting, playing a prominent role on a popular American TV series is otherwise far removed from her thesp roots tromping the boards in the small southwestern Ontario town of Stratford, the home of North America’s largest classical repertory theatre.

As legend has it, Chorostecki caught the acting bug during a performance of Les Miserables at the Royal Alexandra Theatre, and she was particularly taken by actress Susan Gilmour in the role of Fantine.

“It was pretty intense,” she explains. “I wanted nothing more than to just be able to provoke in people what she was able to do, to kind of bring that emotional release.”

So the then eight-year-old budding thespian got to work the next day recreating the role of Fantine in the living room of her Brampton home.

Chorostecki grew up in Brampton. Her parents — a banker and a French teacher — instilled an appreciation of the arts from an early age as well as a penchant for storytelling.

“I fell in love with wanting to know more about human beings and the human condition,” she says. “And my family loves to tell stories. And I think growing up, hearing a lot of stories usually about our own family, really turned me into a bit of a storyteller.”

Nine years later, Chorostecki landed in Stratford preparing for her role in her first big production, Three Penny Opera. And just who was starring in that particular production? Why Susan Gilmour, of course, along with a number of the giants of Canadian theatre including Tom McCamus, Sheila McCarthy and Pete Donaldson.

She counts many of the Stratford Festival’s finest, such as the illustrious Martha Henry and Stephen Ouimette, as mentors.

“I’m just grateful as a 17-year-old they saw not only a spark of talent, but saw it in their hearts to really give me their time and their respect,” says Chorostecki. “Stratford is a beautiful place, but it’s also very hard, and you grow up very fast, but I couldn’t be more grateful.”

From Stratford, it was overseas where she earned a master’s in classical acting. Then the TV gigs started rolling in.

Despite her growing fame south of the border, Chorostecki has no intention of a permanent move to La-La Land, preferring to live at least part-time in Toronto,a city for which she has real passion.

“I love this city too much. It has a big-city feel with a small-town attitude,” she says. “I don’t think I will ever not call this city home.”