At a Bathurst and Dundas street-food market, camel is the other red meat | TRNTO.com
Skip to content 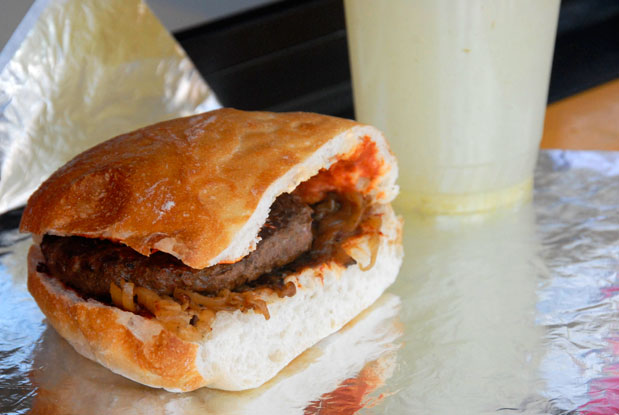 This is what happens when you visit Market 707, the makeshift food court at Bathurst and Dundas where vendors hawk street food out of shipping containers: you realize that Toronto does, after all, have a remarkable street food scene. You scan the options: buffalo milk ice cream, dim sum, pork belly, camel hamburgers, bubble tea, pupusas, crêpes, ceviche, roti and wait hamburgers are not made out of camel.

You ask the inevitable: “are they really made out of camel?” And the man behind the counter, Dali Chehimi, says “yes” as if he’s never been asked the question before, even though he has, many times. His mini-restaurant, Casbah, has been open since February, offering a menu of North African takeout cuisine, ranging from the familiar (merguez) to the less familiar (camel burgers).

Back in Tunisia, Chehimi’s home country, eating camel is not so strange. The Bedoins do it all the time, he says. Once, he had the opportunity to dine with them; they cooked the camel underneath sand, slowly, so that it emerged like pulled pork. “It was a treat,” he says.

In North America, camel meat is a novelty, Chehimi admits. As far as he knows, no other restaurant in the city serves it. But it also tastes good. He claims that his five-ounce patties have no fat — zero. He gets the meat from Whitehouse Meats at St. Lawrence Market, who in turn get it from Australia.

Chehimi, a veteran restaurant manager whose resume includes Sassafraz, Sarkis and Avec, cooks his burgers on a griddle. He smashes them a bit with his spatula. He goes by his gut and cooks the patties medium rare. While the patties sear — he aims for a light caramelization — he sprinkles them with a bit of cinnamon. Then, they’re stuffed into brioche-style buns from Golden Wheat Bakery along with caramelized onions, chili mayo and harissa, a Tunisian hot sauce that Chehimi makes from dried chilies, garlic, cumin, caraway and ginger. The price hovers somewhere between $9-$10. 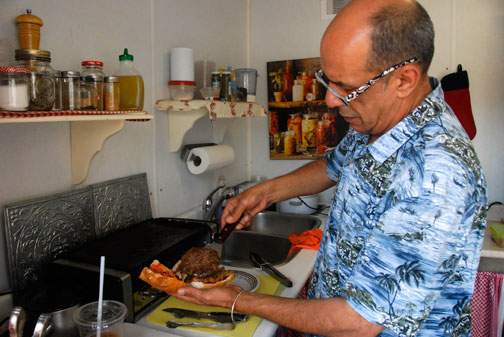 The meat is not nearly as gamey as I’d expected. It’s less gamey than lamb. If Chehimi wanted to dupe me, he could probably talk me into believing that his burgers are beef. The meat is surprisingly flavourful for being so void of fat. It comes from the leg, Chehimi says — the hump, apparently, is too fatty — and it comes from baby camels. (For the curious, eating baby animals is something I’ve written about before.)

Chehimi also makes a mean lemonade. He soaks lemons in warm water for 15 minutes, then blends them whole — rind and all — with mint. He adds water to the purée and, for the soft drink addicted, liquid sugar, if it’s requested. The lemonade happens to pair with camel quite well. (On a side note, it’s also available at The Arrow, a new café on Dundas West that does not serve camel.)

So, yes, I ate camel, and I liked it. Please don’t bust my hump about it. I’m not the only one: apparently the ancient Roman emperor Heliogabalus had a soft spot for camel’s heel. I wish he existed now, so we could eat camel burgers and play Settlers of Catan together.

Now, camels are not kosher, because while they do chew cud they do not have cloven hooves, but other than that, I’m baffled as to why people don’t eat them more often. Camel tacos sound good.

Anyone looking to take the plunge would be wise to check out Market 707 on the third Friday of the month, when the new Street Food Fridays event takes place, which combines the market’s already great selection with food trucks. 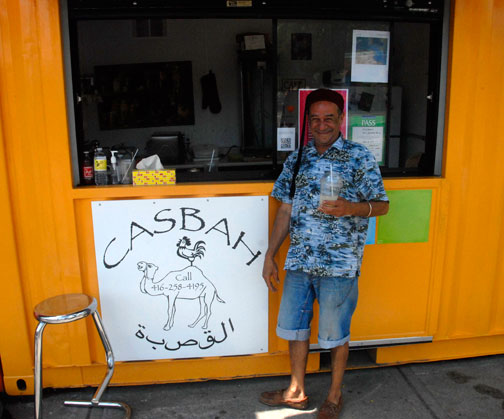