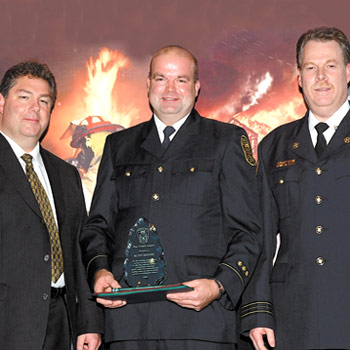 WHILE FOR SOME choosing a career path is a struggle, for Scott Sedore there had always been an inner fire burning.

“To be honest with you, I always wanted to be a firefighter,” Sedore says. “So all through school, I directed everything I did towards it.”

For more than 20 years, Sedore has served as a member of the Richmond Hill Fire Department, and captain for the past six years at station 8-1 at Yonge Street and Major MacKenzie Drive.

Recently, the 41-year-old was presented with the Chief ’s Award, an annual recognition presented to the firefighter that “has demonstrated spectacular leadership, in an informal or formal manner, whereby the recipient has led others to improve themselves in all aspects of the fire service and effecting positive change.”

“Scott is a very positive captain,” said Chief Steve Kraft, regarding the selection of Sedore. “He has a great attitude. He gives back time to the community.We get a lot of requests for Scott. When people have community events, they actually want to know [if he] is working.”

Providing turkey dinners to families in need, distributing pumpkins and candy at Halloween and regular hospital visits are just some of the ways that Sedore and his crew give their time and energy to the community.

“It’s just about having some fun while you’re at work,” Sedore says. Additionally, for the fourth year, Sedore and crew constructed a float as part of last month’s Santa Claus Parade, the only crew in Richmond Hill to participate.

A women’s car care clinic, in conjunction with Richmond Hill Hyundai, to inform the public on what to expect after a car collision is also planned for this month. Sedore credits his crew and their commitment to community service.

“They’re a good bunch of guys, who actually just like to do stuff like that, and you don’t see that very much any more,” he says.

A summertime barbecue is also something Sedore and company undertake for L’Arche Daybreak, a Richmond Hill support organization for men and women with intellectual disabilities.

“We love going up because they are just so appreciative,” he says.

For Sedore, the personal reward of his efforts is simple.

“If you can give a little bit back, just to see the smiles on kids’ faces, and even the parents’ faces, when you go out and do your work, it makes you thankful for what you’ve got.”