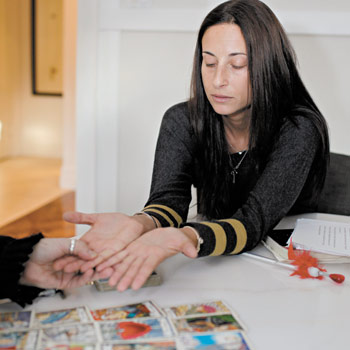 There are two types of people: those who like to believe in clairvoyants and those who don’t. Pampered princesses love this stuff. So what better way to start the new year than to meet with a psychic? I meet with “Miki,” who is known widely from her Ask Miki daily psychic advice column.

I’m a little unconvinced, I’ll admit, when I first talk with Miki, who bills herself as Canada’s top psychic and has her advice column in a daily commuter newspaper. Not about what Miki will say, but about her ability. When I try to set up an appointment for the following Monday, she answers, “I’m not sure what I’m doing on Monday.” “Are you free Tuesday?” I ask. “I’m not sure,” is her response again. Not exactly confidence inspiring.

In any case, Miki arrives at my home at exactly the right time on the scheduled day. “I have a built-in GPA system,” she says and laughs. I count five gold hoop earrings in one ear, her many gold rings, her large bag with crystals falling out, her long, unkempt hair and think, “OK, this is what I’m talking about.”

First, I learn a little about Miki. She knew she had “the gift” when she was nine years old. Her mother and grandmother were already clairvoyants. “I come from 10 generations of clairvoyants,” she says. “When I was nine, I saw my first ghost,” Miki says. “We had just moved into a house on Briar Hill. I was playing with my Barbie in front of this vanity with a large mirror,“ she starts. (And, yes, she’s talking about Briar Hill in Forest Hill. ) “I saw this old lady float by the mirror and I called out, ‘Mom! Mom! I saw a ghost!’”

Her mother explained that ghosts were part of life, but they just haven’t “crossed over yet.” To make a long story short, the mirror shortly flew across the room, smashing against the wall just over her head.

I forget about the trauma Miki must have gone through and immediately ask if she sees any ghosts in my house. “No, I don’t,” she says. She explains ghosts usually will leave homes that have been gutted and redecorated. (Call your interior designers now!)

Miki does tarot, crystal ball and palm readings. The deck of tarot cards she lays out on the table looks decades old and very worn. She explains she only uses the tarot cards as “back up” because she can read you by just looking at you and asking your birthday. What she’s really good at is something called “psychometry,” where you can show her a photo or a belonging of someone’s and she can tell you about that person from the vibrations she gets from seeing it. Or, in my case today, the chances of a happily ever after. This doesn’t surprise her.

“The first thing people always ask me about is relationships. Love is more important for everyone, even before money and health.” I show her an author photo on a book flap. The man in the photo is a writer I’ve been dating. “He’s very moody,” she says immediately. “He’s very intense. He’ll often withdraw into himself and shut down. But he’s not a bad guy. He’s a nice guy.” She has summed him up pretty well. “Wait,” I yelp, getting up and racing to find my camera. I show her another photo of a man. “What about him?” “He’s a liar,” she tells me. “He lies about everything, even the little things. If you want to be with a liar, then fine.” I’m amazed, since I have not told her that I was romantically involved.

I show her a photo of my daughter. “She’s very sensitive,” Miki says. “She’s more sensitive than other children. If someone says something mean to her, she’ll take it with her for days.” (Again, bang on.) I ask her what my daughter will end up being. “Well, she might want to be a veterinarian,” she starts, before I cut her off. “That’s what she’s been saying!” “But she can’t be. She won’t be able to deal with the death of animals. She’ll mourn them for too long. I see her being an actress or, wait, a psychiatrist.”

The fact that Miki specializes in psychometry is a sign of the times. “In the past couple of years, most of my business is over the phone,” she says. “People are so busy, and after a hard day at work, they’d rather curl up at home and talk to me. They e-mail photographs first and tell me their birthdays.”

She says she predicted 9/11 four days before it happened, seeing a vision of something hitting the twin towers flash on her television while watching a documentary. She predicts Brangelina won’t last more than two years. And that Tiger Wood’s wife won’t make a decision about her husband until February.

As she’s leaving, her phone rings. Miki’s friend is distraught. “I told her she should have never married him,” she tells me afterwards. “I told her it wouldn’t last 90 days. It didn’t even last 60.” I mention, if I had a clairvoyant friend, I’d be constantly asking her what to do. “The problem is,” she sighs, “people don’t always listen.”