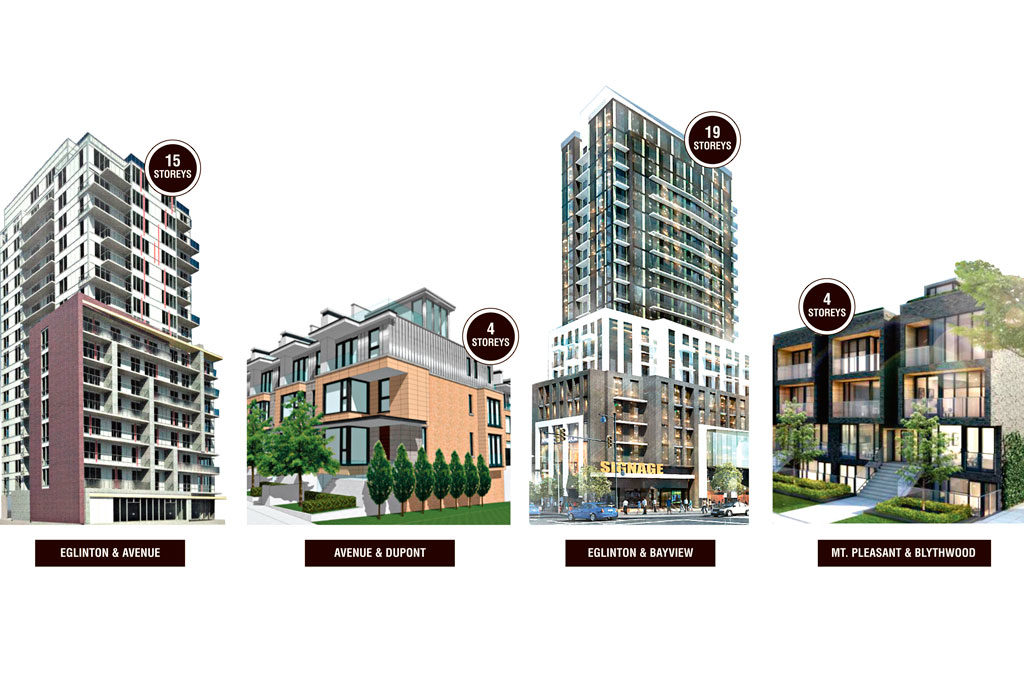 Proposed: A 15-storey building with 112 residential units and 189 square metres of commercial space on the ground floor. The proposal spans several properties including Yitz’s Deli, an old school Jewish delicatessen and neighbourhood fixture since 1972.

Why you should care: The city planning report takes issue with the height and density of the proposal. It refers to the development as  “inappropriate” with unacceptable impacts that would form a negative precedent for the area. The Toronto District School Board has advised there is insufficient space at the local schools to accommodate the new students anticipated from the proposed development.

Who is involved: The City of Toronto and Avenue Road Eglinton Community Association will oppose the development in its current form at the hearing.

Talking points: Diane Silver, the City of Toronto planner on the file, noted that the Eglinton Connects study, which encourages development along the Eglinton Crosstown route, permits a maximum building height of seven storeys.

Proposed: The developer proposed 22 four-storey townhomes in five blocks on a portion of land to be severed from the De La Salle College property — a prominent landmark on Avenue Road for over 150 years. A settlement was reached for 19 townhomes at an Ontario Municipal Board mediation.

Why you should care: The previous proposal called for the relocation of the wrought iron gates (circa 1869). Local councillor Josh Matlow also expressed concern that the view of the escarpment (a.k.a Lake Iroquois ridge) — which he said is historically significant — would be ruined.

Who was involved: The Brothers of the Christian Schools of Ontario, the Cottingham Square Association, Oaklands Community Preservation Association and the City of Toronto.

Talking points: As part of the settlement, the developer agreed to preserve the west half of the historic gates and only relocate the east half as part of the conservation initiative for the property. The Gatekeeper’s Cottage, which the developer had panned to demolish, will remain on the site.

Proposed: Sunnybrook Plaza was the first suburban strip plaza built in Toronto.The developer intends to demolish it and build two residential towers, 12 and 19 storeys, on the site. The two buildings would contain a total of 408 units and 410 parking spaces.

Why you should care: Locals are concerned the height and density of the proposal will exacerbate traffic congestion, put a strain on local infrastructure and destroy the existing ravine. If approved, the proposal could be precedent setting on Eglinton Avenue. There are three large-scale proposals currently in the pipeline for that stretch of Eglinton between Bayview Avenue and Leslie Street.

Who is involved: The Leaside Property Owners’ Association and the City of Toronto will oppose the development.

Proposed: Two four-storey stacked townhouse blocks made up of 80 residential units will replace eight detached houses. Driveway access is located at the west end of the site. Trolleybus Urban Development Inc. is also a partner on the proposal.

Why you should care: A city planning report states it would significantly alter the character of the neighbourhood. The size and configuration of lots and heights, massing, scale and dwelling type are different than nearby homes and could set a precedent.

Who is involved: Members from the Density Creep Neighborhood Alliance and the Federation of North Toronto Residents’ Associations will speak against the proposal at the hearing, as will the City of Toronto.

Talking points: Senior city planner John Andreevski wrote a refusal report in September 2015, and Toronto City Council voted to reject the application in November. In his report, Andreevski stated the proposal did not conform to the city’s official plan for the neighbourhood as its density is two times the current limit for that side of the street.

All hearings to be held at the Ontario Municipal Board, 655 Bay St.,16th floor