Band of the Week: Graydon James & The Young Novelists - TRNTO.com
Skip to content 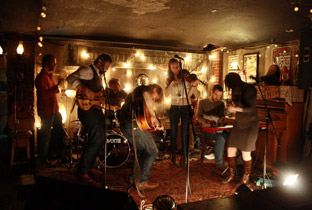 Making music is a lot like constructing a building. Graydon James & The Young Novelists start with the foundation of a simple acoustic guitar and construct a sturdy frame with the excellent accompanying instrumentation; the songs often build into a joyful wall of sound. But what makes the music feel like home is the beautiful vocal harmonies that James and co. craft together.

Yes, there’s something inherently comfortable about the music they perform. Hearing them for the first time is simultaneously refreshing and familiar. The influence of The Band is undeniable, but also falls short of the point: this music is timeless. With one double album under their belt and an EP on the way, the house this group of Toronto musicians is building looks like it’s going to have a great view of the horizon.

James took some time out from preparing for an opening slot at Hugh’s Room tonight to talk with us about the state of folk music and what it’s like to be a mailman while playing in a band.

You were actually my mailman when I lived around College and Bathurst. Are you still an esteemed member of Canada Post? How easy is it balancing that with a band?
I’m still with The Post, “flying the blues” as we call it, and trying to bilk old people out of their pension cheques. It’s a great job, especially in the summer and fall when the weather is purely amazing. It is actually quite an easy job to balance versus a band provided you absolutely hate sleep. Luckily, I despise the tyranny of sleep, which is helpful when you’re going to bed after gigs at 1:30 or 2 a.m. and getting up at 5:30 a.m. It does mean that I’ve had naps at inopportune moments, like while standing waiting for the subway and also while in rehearsal — for another band, where I play drums — both of which happened.

And I hear a few of your band mates recently got married. Is that changing the dynamics at all?
I think the dynamics inevitably change, whether people are getting married or just alienating fans by sleeping with them indiscriminately. Or, more seriously, yes — but dynamics are a good thing. Babies are now part of the band dynamic as well, but the fact that it’s all taken in stride says things about the dedication of the band members, in my opinion.

From what I understand, your double album Goodnight, Young Novelist was meant to be a one-off project but ended up being the impetus in bringing the band together. Can you elaborate a bit on that?
Well, there were several things feeding that particular project. I had a band that imploded, and I had a bunch of songs, and I had some time and some equipment. And let’s not forget a healthy amount of stupidity, which is key for any large undertaking. So I recorded the songs mainly so I wouldn’t forget how they went, and then I thought, “well hey, I’ll just make this an album.” And then I thought, “maybe it makes sense to try to tour with this beast.” Which led me to contact people I had played with before (mostly from times I’ve played drums for other bands) and get a band together and do a couple of weeks to the east coast and back. We tried fighting crime along the way, but that didn’t really work, so now we’re just a band. We are willing to join a posse, though, if one is a-forming.

There’s obviously a strong folk element to your music, and it seems like folk music is experiencing a bit of a resurgence of late. Is this just the cyclical nature of musical trends or do you think there’s something more behind its growing popularity?
I actually think it’s a bit of a response to the mainstream pop music machine. Not that people can’t like or appreciate both raw folky stuff and slick pop stuff, but I feel like all trends mature at a much more rapid pace and that means the backlash to trends also matures quickly. And people love harmonies. That’s part of the endurance of The Beatles, The Beach Boys, The Band, CSNY and folk music in general. Maybe there’s a spiritual element to it or even just a community aspect, but people singing together is kind of intrinsically enjoyable. Even the Beastie Boys do it.

What’s the song-writing process like for you guys? Has it changed as the band has grown?
It’s still me yelling at myself, in the main, but I have noticed that when I bring a song to the group they vet the balls out of it. Which is good! My opinion is notoriously useless when it comes to picking songs that we should work on and bring to fruition. I’m the guy that made a 40-song double-album, for crying out loud.

What’s coming up for the band?
The immediate thing is that we’re playing a last-minute opening slot for The Little Stevies at Hugh’s Room on Wednesday, Aug. 24, which is such an amazing venue that we are kind of alarmed about it, but it will be good times. Right now we’re working on a lot of new material, which we’ll take out onto stages in the fall and then into the studio in the winter. This time around we’ll have a producer and actually have some kind of plan, which is unfamiliar territory for us. We are mightily jazzed about it. Following that I think we all hope to make more babies… or at least practice making babies. We’ve been looking for a lead guitarist/mandolin/banjo player for a little while to no avail, so we are still open to adding some fellow folky to the lineup. Feel free to get in touch! If you hate sleep, of course.

Recommended track: It Takes All Kinds
Video: What Kind of Man

Ty Trumbull is a Toronto writer. He works as an editor at 680News and can be seen playing banjo with his band, The Sure Things, every Monday at the The Dakota Tavern.