Band of the Week: Japandroids | TRNTO.com
Skip to content 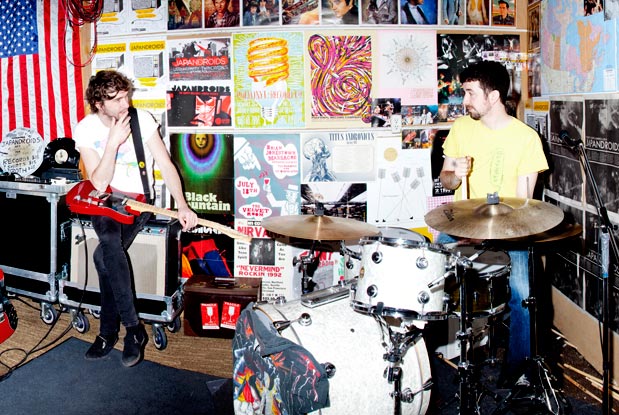 If you’re looking to tap into your inner dark side, these Vancouver rock gods are the the droids you’re looking for. Japandroids may only be made up of axe man Brian King and drummer David Prowse, but their sound is massive. Their dense and heavy punk-garage-vibe is like Fugazi had a love child with MC5 that was raised by Against Me!

Released this week, their second album, Celebration Rock, is every bit as good as we’d expect from this Vancouver duo and the single “The House That Heaven Built” is so catchy you’ll have a string of “oh-oh-ohs” stuck in your head long after hearing it. We talked to Prowse about new-album jitters, Nick Cave’s awesomeness, and the big sweaty mess in store when they play Lee’s Palace in June.

Celebration Rock is a dense piece of work — did you approach it any differently from your acclaimed first album, Post-Nothing?
It was the same studio with the same engineer and same basic instrumentation, there weren’t any bells and whistles. But we’re just hoping that we’re becoming better songwriters as we move forward and keep writing better songs and getting better performances from those songs in the recordings. There was a conscious move forward lyrically and we put our vocals a little higher in the mix — we’ve become more confident as time goes on, as singers. We were pretty reluctant to sing in the beginning of the band and we were always hoping that someone else would come along and start singing our songs.

Post-Nothing gained tons of popularity and was nominated for a Juno Award. How did that affect you?
We were just excited to get an opportunity to put a record out with a record label, and get to really tour. We had been taking every tour as it came and saying yes to everything. Every tour would be a bigger venue, and all of a sudden you’re playing big festival stages. It was incredibly exciting for Brian and I, and it was certainly overwhelming at times. It’s a pretty big adjustment to go from being a person living a normal life to putting all your time into this band that you’re really passionate about. All of a sudden the band is the complete focus of your life — and you’re constantly moving too, you’re never home, it’s always on to the next town.

I heard you guys once broke up. What happened?
There wasn’t really a time where we ended up really being broken up. We basically decided that things weren’t going to keep going and we set a deadline for ourselves, to give us an incentive. It’s kind of a weird thing to explain. In most stories you hear of bands breaking up the guys get into a fist fight and the band is broken up that night. With us, it was a very frank, lucid conversation, a “Well, what do you want to do here?” kind of thing. We had planned to break up but we didn't actually follow through with it. I guess we’re not very good at doing that.

Some of the songs on Celebration Rock date back a few years. Has the album been a long time in the making?
Things sort of snowballed during the Post-Nothing blur. We hadn’t really talked about making another record, we were just rolling with this momentum that ended up taking us all over the world over the course of 18 months. We made a few singles along the way and Polyvinyl wanted to put out another record. We both felt like we had something to prove with the new record, it’s a very different head space you’re in when you’re unknown compared to a record you’re making as a band people like. It ended up being a pretty gruelling process to tell you the truth.

How gruelling?
It took us a lot longer than we had originally hoped. We had high expectations for ourselves and we knew that there were a lot of expectations for the record — a lot of people had become attached to Post-Nothing. You feel a certain responsibility to your fans and you want to make something that’s hopefully as special as Post-Nothing was to those people. This time we had more time to put in, every song was as good as we thought it should be.

So how does being in the studio affect your creativity?
There’s not a lot of studio trickery [on the album]. It is supposed to sound like a Japandroids show, just a really good one. Neither I nor Brian would ever claim to be musical geniuses, I think we’re more artisans than artists. It’s a lot of trial and error. Like for “Adrenaline Nightshift,” we had the chorus for that song for a long time, and we basically scrapped everything else but kept the chorus and made the rest of the song completely different. “Evil’s Sway” is another song like that. If I played you the first recording and then the one that ended up on the record, you’d be able to tell it’s the same song, but there was significant surgery on it.

You cover the Gun Club’s “For the Love of Ivy.” Apart from it being a killer song, why did you choose it?
The Gun Club are a great band, and part of the reason we chose to cover a song of theirs is because we can’t write a song as good as that. We can’t write in that style, but it’s a band we really love and a really fun song to play live. Same thing with a lot of the covers we’ve done. We covered Jack the Ripper by Nick Cave and The Bad Seeds, it’s not really in us to write that song, but at the same time we’re both really big fans of Nick Cave. So we wanted to expose some Japandroids fans to Nick Cave, and just play a song we thought was really great.

What can we expect from the Toronto show at Lee’s?
Well, we’re playing the entire record on this tour. So, uh, that’s gonna be fun. Hopefully it will be a big sweaty mess.