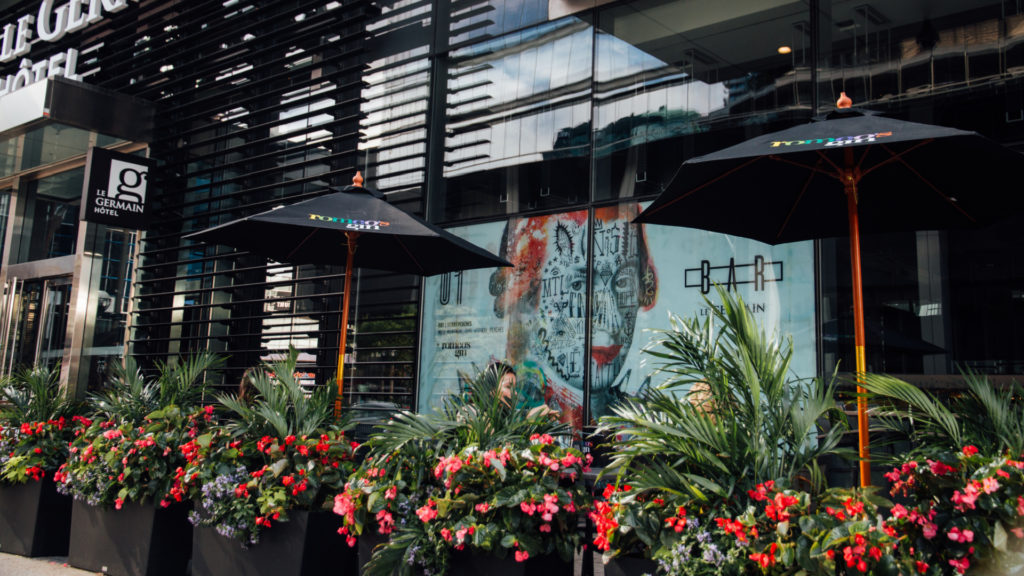 Chef Johnson Wu has developed an equally unconventional menu to pair with the restaurant’s distinctive decor. Wu’s menu, whimsically dubbed as “Wusian Fusian,” is a far cry from a typical hotel bar menu. “I wanted to put in a lot of my own flavours,” says Wu. “It’s a little bit more unique — something that’s not really around in our area at least.”

Wu’s dishes are bold in their exploration of Asian flavours and ingredients — most notably the tartare de cheval (yes, that’s horse tartare), which is seasoned with lemongrass, chili, basil and a tamari duck yolk emulsion and served with a Thai curry cracker. “We honestly just want to do something different. And also represent a little bit of our French background here,” says Wu.

The tender, 24-hour pork belly doused in gochujang and aioli and topped with crispy pig ear is another must order at Bar Le Germain. “I like to hit a lot of different notes,” says Wu. “The sweet balanced with the salty, a little bit of spiciness and in the after taste, there’s a bit of umami-ness to it.”

The menu also includes plenty of more approachable but equally flavourful dishes, such as a Taiwanese braised pork poutine and several kinds of fried chicken sandwiches. The ‘Stuffed Wing Fried Chicken Sammich’ started out as an experimental dish that gained traction after some of Wu’s friends posted photos of it on Instagram. “When we introduced the sandwiches here, it was just for fun,” says Wu. “We never meant to put it on the menu.”

The wing is deboned and filled with kimchi fried rice while still attached to the breast. The sandwich quickly became a takeout hit and has now made its way onto the regular menu at Bar Le Germain.

The drink menu includes a number of cocktails developed in partnership with Romeo’s Gin, including the refreshing X-Otic, which blends Romeo’s X Gin with pineapple, lime, cucumber and Latin bitters. There’s also a solid selection of wines by the glass and bottle, as well as local and imported beers.

Bar Le Germain is currently open for patio dining, as well as delivery via SkiptheDishes,
Uber Eats andDoorDash. Wu says the menu will also be available in the hotel’s main floor lounge once indoor dining is permitted.