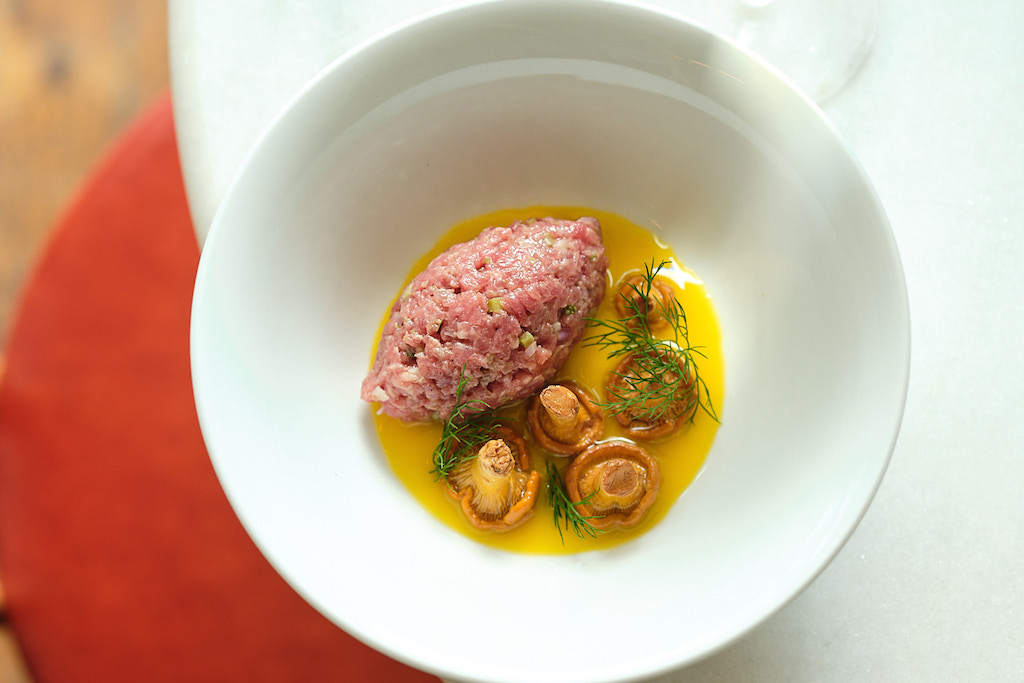 JP Adamo is a chef and sommelier with international culinary training. He’s inspired by good wine, travel, and the spaces in which he’s opening his latest ventures: Crosley’s restaurant at 214 Ossington Ave. and Dimes cannabis shop at 1048 Queen St. W.

Opening in January, Adamo’s latest restaurant, Crosley’s, is in its unofficial infancy. The restaurant isn’t even in its own space yet, but it’s already hosting a couple of pop-up events including a New Year’s-themed menu out of Bar Piquette on Queen West, which Adamo co-owns.

Construction on the Ossington space began on March 10, just three days before the first lockdown, which stalled and halted a lot of his plans. No matter, says Adamo, who used the time to perfect and hone his brand and adapt to changing times.

The decor was changed after the second lockdown began, Adamo says, as he realized that dine-in experiences changed after Torontonians have spent so much time in their homes. Originally, it was supposed to have a dive bar motif with moody lighting and a dark rough-around-the-edges vibe. But, instead pivoted to a brighter, more open-space concept recognizing that people would want a spacious and airy feel when they left their homes for the first time.

Bar Piquette is inspired by wine bars in Paris and tapas bars in Barcelona complete with a cosy back patio. Crosley’s, he says, is intended to look like it had been there forever, a lived-in, local space just like staples in North American cities, with antique details, high ceilings and wooden furniture pieces.

Like Bar Piquette, Crosley’s menu will have small share plates, and the decor pays homage to the electronics store that originally occupied the location. He even kept the original flooring after pulling out vinyl tiles to reveal the treasure underneath. The menu is rife with distinctly Canadian, nationally-sourced items with an international twist, courtesy of tasting trips to London, Italy and Paris.

“It’s definitely not something that is supposed to be over the top,” Adamo notes. “It’s just really simple food and great products.”

At the same time, and just around the corner on Queen West,  Adamo’s ’70s-themed cannabis shop Dimes is scheduled to open Dec. 17. The name, of course, pays homage to a dime bag of cannabis, which was common slang back in the day. He worked with design firm Indeks to create the brand identity and with local designers FutureTriibe for the interior.

He originally wanted to enter the industry five years ago, on the cultivation side, but just missed the cutoff. So, he pivoted to retail, although even then he missed the second lottery. But he got in when the market opened up to a regulated licence system.

“From the onset of Dimes, we have been focused on the customer experience and store design,” says Adamo. “Due to the current lockdown, we cannot host customers in-person in our store but are still eager to open and serve the vibrant Queen West community through curbside pick-up. We have been awaiting our AGCO licence since August, but with the new measures in place, have quickly pivoted to set up an e-commerce platform and engaged our team for delivery.”

Adamo grew up in the hospitality industry — his family owned a resort north of Toronto for over three decades until they sold it two years ago. They also built a winery from the ground up, another venture sold two years ago. It inspired Adamo to continue in the industry in which he grew up.

It’s an interesting experience opening two businesses during a pandemic, Adamo concedes, but he is proud of the work he has done and looks forward to having people safely visit the outposts’ physical locations.