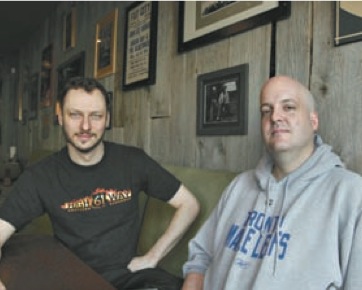 WHEN SOMEONE MENTIONS down- home BBQ, Leaside is not the first place that comes to mind.
The fact that the Cluck, Grunt and Low branch on Bayview folded would seem to underscore this fact. Undeterred by another’s failure, co-founder Kerry Knoll decided to open his own homage to Southern United States cuisine on the same site, dubbing the restaurant Highway 61. As the project gathered steam, Ken McGarrie and Nick Sinnett jumped in.
Relying heavily on a secret family sauce, perfected by Knoll’s father, the restaurant opened up its doors last month.
We love the feel of the place: it is rough hewn, with great blues playing all night, and sticky fingers are encouraged.
The menu is standard with a few diversions such as the list of mustang salads, but a quick look
around the room shows that everyone is here for the meat.

The combo plates render decisions unnecessary. They are built for one, two or three to five diners, and we fall neatly into the middle category.
The Big Joe Turner (The Boss of the Blues) consists of a slow-cooked half chicken, three ribs, brisket and pulled pork with two sides ($29.49). Done.
Since the platter does not include any beef ribs, we add on The Big Beef Rib, allowing us to have dry pork ribs on the platter and a saucy beef rib ($13.95).
The brisket is outstanding, having clearly been cooked for hours, rendering the beef juicy and tender, and there is enough of it to make a meal on its own.
The pile of dry, pork ribs (way more than the advertised three) are fat-free and meaty. The rub is delicious (Texas style) but a little tentative. We may be in Toronto, but there is no need to dumb it down for us.
The big beef rib that we have ordered “saucy” is the biggest thing I have ever seen on one bone — it overhangs a dinner plate.
To quote the menu: “The Flintstones never had it so good.”
There is a fair amount of fat on this baby, but the beef is buttery, and the secret sauce has permeated all the nooks and crannies, making it slurpy good.
I am told that pulled pork is supposed to be dry and, if so, then this is a success. The half chicken is deceptive, as it is rather pale and does not bear any signs of a grill, a natural result of smoking.
I cannot tell you how delicious this chicken is. It is impossibly succulent and bursting with as much taste as a chicken can possibly have.
There is only one dessert, so we share a slice of sweet potato pie. Let’s just say these tubers fare much better as fries than as baked goods ($5.49).
Special note: there will be live blues in the upstairs club this summer. Ribs, blues and a smokehouse — of such things are dreams made.