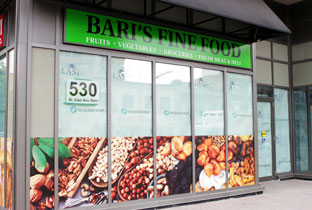 As condo developers fill in the holes between Lakeshore and Eglinton, they have to take a different approach to street-level retail. At Bathurst and St. Clair, that means that Starbucks and Menchie’s have been joined with independent grocer Bari’s Fine Food.

Bari’s is a greengrocer-meets-deli that opened at 524 St. Clair West in the early 2000s. When the building was razed for development, the store moved across the intersection to 1455 Bathurst — rebranded as Bari's Delicatessen — only to close a year later to make way for a condo demonstration centre.

A new location of Bari’s is now set to open at 530 St. Clair West, right near its original location. The selection will include fresh fruit and vegetables, general groceries (with some high-end options like imported Italian pasta), a full-service deli counter and baked goods from Toronto’s Hermes bakery.