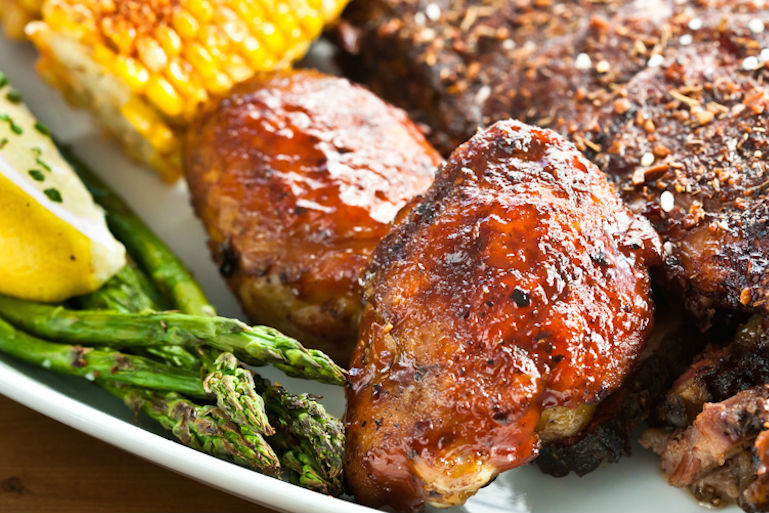 Barque co-owner and chef David Neinstein says that after initially shutting down their dining room, the team was overwhelmed with to-go orders. While it sounds like a good problem to have, the Barque team was concerned about whether they were truly practicing social distancing.

Hi everyone,⠀ ⠀ We have made the decision to shut down take-out and delivery for the time being to re-evaluate the situation. Please stay connected and check back soon for updates. ⠀ ⠀ #WashYourHands

“The restaurant was packed with drivers and guests coming in to pick up food,” says Neinstein. “Our staff and management team became increasingly uncomfortable with an environment that was technically legal, but we all knew very well that this was not what health professionals were recommending.”

Neinstein and his team are now offering a modified delivery and takeout menu that can be executed with just one staff member in the kitchen at a time. The new menu features BBQ staples like brisket, pulled pork, and lamb shoulder, plus salads and sides, all of which are served cold with reheating instructions. “BBQ is rather convenient for this method, so it actually works well,” says Neinstein.

To further combat crowding in the restaurant, Barque is requesting that orders be made 24 hours in advance so they can manage foot traffic volume. Customers collect their orders via curbside pickup or delivery for a $10 flat rate.

Although Barque had previously used third-party providers for delivery, they’re taking this new to-go program in house. Orders are placed via phone or email and processed through Square payment systems to minimize contact. Neinstein says that not only does this allow them to save on the added cost of using a third-party provider, but they can put some of their own staff to work making deliveries.

Like most restaurants around the world, Neinstein and his team had to lay off over 30 employees amid the COVID-19 outbreak.

In addition to the food menu, Barque is selling its signature rubs, seasonings, and sauces for home cooks. Profits from these latter items are being used to help support their staff during the restaurant’s temporary dining room closure.

Aware that the small cash payments these donations could offer wouldn’t make much of a dent in the Barque team’s day-to-day living expenses, Neinstein is opting to take advantage of the food discounts available to restaurant operators. “We’re going to create essential packages for our staff that they design that will have vegetables and meats and grains and stuff that they would need,” says Neinstein. “Grocery essentials are cheaper for us to buy, but can save them money.”

Neinstein says that the response from the community has been strong, but the future remains uncertain. “The one thing about all this is we don’t know what level of business will be required to necessarily make money,” admits Neinstein. “But this seems like the best thing to do in order to satisfy our needs to keep our staff working and to keep some money coming in.”

For now, the preorders are rolling in. “I live in the neighbourhood myself and we’re getting tons of support,” says Neinstein. “People are saying ‘we need a break from our own cooking and to get non-homemade food once in a while and if you guys can do it, then we’ll support you.’”