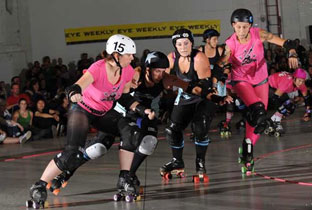 If you’re a sports fan who’s never been to a Toronto Roller Derby game, it’s a great time to get your feet wet. Toronto’s biggest roller derby event of the year is going down this weekend at Downsview Park as Toronto’s all-star team, CN Power, hosts teams from Kitchener-Waterloo, Ottawa and Montreal in a two-day tournament. We asked CN Power co-captain Lady Scorcher to fill us in on this weekend’s events.

For someone who might be watching roller derby for the first time, it can seem a bit confusing. Any tips for getting the most out of your first game?
Look for someone with a derby name on their back and ask questions! There will be lots of girls from surrounding leagues at the hangar and derby girls sure do love talking about roller derby. Most people find that the first game they watch is confusing, but they get the hang of it by the second. This weekend’s tournament is a great opportunity to catch multiple games and really get a better understanding of the game.

Describe what makes this tournament something special compared to all the other roller derby people can see in the city?
I think the most noticeable difference will be in pack strategies. Exceptional skaters playing on their own are not very effective. At this level, you will see all four skaters in the pack working together. Expect to see more control of speed, and fast switching from defensive to offensive modes.

The event is strangely structured in that it’s a round robin with no playoff rounds. Why did you decide on that format?
It’s true, it is an unusual format, but it was important to us to play full-length games, and for each team to play each other. We are currently pursuing full membership in the Women’s Flat Track Derby Association, which has member leagues all over the world. From a fan’s perspective, look for some of the best roller derby being played in Canada right now.

How does Toronto compare to the other teams who are coming?
CN Power reorganized at the beginning of 2011 and has improved immensely in the last few months. This will be our first game against any Canadian teams since our loss to Tri-City Thunder near the end of 2010. Montreal’s New Skids on the Block have been steadily improving, and depending on who you ask, they’re ranked among the best teams in the world. I expect both the Vixens and Thunder games to be the close matchups against CN Power.

In your real job, you’re very organized. Are there any skills from your job that translate to the derby track?
I’m an engineer by training but have worked in optimizing processes and project management in manufacturing for many years. I work in a highly regulated environment now, so yes, being on top of details is really important for my job. I do love the details, but I am working on clearing some of those during the game to be able to make quick decisions when things change. We have a great blend of people on the team and I love how well we complement each other, from supporting each other on the track to planning and executing success for our team.