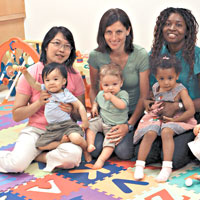 Claire Zlobin knows first-hand about the challenges that new moms can face after having a baby.

“I went through the baby blues really, really badly. I think a lot of it was because I moved to a new area and I didn’t have friends there. I just didn’t have that support. I was like sinking in depression,” she says.

A mere two months after her daughter was born in 2007, Zlobin decided to reach out and connect with other moms in the Thornhill area by organizing meetings where they could share their stories and experiences.

Around the same time in Richmond Hill, first-time mom Joanna Vernik started holding very similar meetings of her own. “In the beginning, it was the social aspect. I really wanted to connect with other moms to know what they are going through,” she says.

After Vernik and Zlobin crossed paths in 2008, they decided to join forces to create Life With a Baby — a support group for new and expecting mothers. By building on their initial efforts, the not-for-profit organization, which now has 500 members across all regions and has grown to encompass free information seminars, events and an online discussion board. The group helps provide access to information and resources for mothers, a service that is also available in other languages.

Life With a Baby’s main objective is for moms to feel happier and more relaxed, which benefits not only the mom but the baby as well. Through meetings and the website, the group serves as an outlet for moms to discuss a broad range of topics, like whether or not to vaccinate, and debunks any motherhood myths.

“If you’re a mom and you’re feeling alone and isolated and sinking into depression because you have no support and no connections to other people, it’s very difficult to be a good mom because you’re not a happy mom,” Zlobin says. “There’s such a stigma, such a need to be, like, I’m the perfect mom, I can do everything, my baby is great, I look great, and everything is fine. People are nervous to say my life is normal, which is what it is.”

“I think people are very hesitant to talk about things like, ‘I let my baby cry and I feel guilty about that,’ and the balance of the husband,” Vernik adds.

New topics and discussion ideas often stem from their own experiences and from new challenges that arise as their kids grow older. For example, after she returned to work from maternity leave, Vernik began scheduling meetings for working moms. Likewise, the group has organizers that specialize in being single moms and moms with infants or toddlers.

Zlobin, who had also planned on going back to work, only recently decided to focus on Life With a Baby because she knew how much the group was needed.

“Because I went through it first-hand, maybe I see the need through a different angle. I know that if I hadn’t started this group and connected with other moms — I was actually depressed most of the time that I was doing it — nobody knows unless you talk about it,” she says.