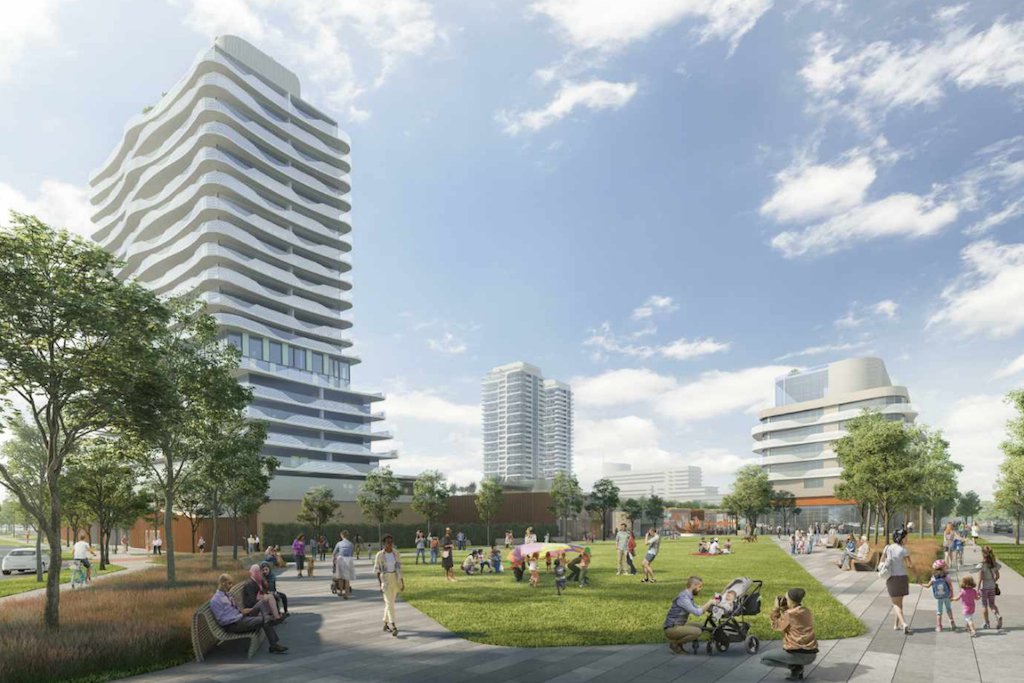 A proposal to redevelop land surrounding Bayview Village Shopping Centre has been revised prior to a hearing at the Local Planning Appeal Tribunal (LPAT) originally scheduled for September but has an uncertain timeline now due to COVID-19.

In July 2017, bcIMC Realty Corporation submitted Official Plan and Zoning By-law amendments with the city to build two towers at the south portion of the site of 28 and 33 storeys, as well as a 19-storey tower in the north portion of the site. Also included were two six-storey buildings and an above-ground parkade.

A revised application submitted to the city in January 2020 proposed two south towers of 30 and 29 storeys, and a north tower of 20 storeys. A reduction in tower floor plate sizes results in a reduction in the overall density of the project. The revised application also increases the amount of proposed parkland to 4,746 square metres. Further revisions regarding things such as the buildings’ aesthetics were submitted last month.

Councillor Shelley Carrol said that any changes made to an application after an LPAT hearing is requested don’t need to be shown to the community. A community meeting was held in this case, she explained, in an effort to foster agreement between the developer and the community groups prior to the LPAT hearing. A process she said has been hindered by COVID-19.

“It’s pretty much on hold now, LPAT isn’t meeting, meetings are being moved to later in the year all across the planning portfolio and it’s difficult to have community meetings,” said Carrol.

David Reid is the secretary of the Bayview Sheppard Neighbourhood Alliance (BSNA), a residents group with party status at the upcoming LPAT hearings.

He said the group was formed by neighbourhood residents concerned about the scale of the proposed development and its impact on things such as traffic and infrastructure. He said that the latest application is not that different from the previous one and fails to address such issues. His group has not been able to provide as much input as he would like prior to the LPAT hearing.

“We’re still going to participate in the hearing, our understanding is that city planning and the developer have agreed on the built form and density components of the project which is frustrating for us because we’d already indicated where our concerns were,” said Reid.

Carrol said various points are still under discussion, noting that the parkland dedication is still short of the requirement under city policy.

“Once they’ve (the developer) applied for a hearing they can, of course, go forward and say even though we’re a little short, that’s all we’re offering, what do you think province? And because the current provincial government has changed the nature of LPAT back to being a little more authoritative they can say I agree with you and not the city. I agree with the park space you have there,” said Carrol. “But what we’re trying to do is arrive at a compromise with them, and those discussions will resume I guess once we’re in more of a back to work mode at the city.”