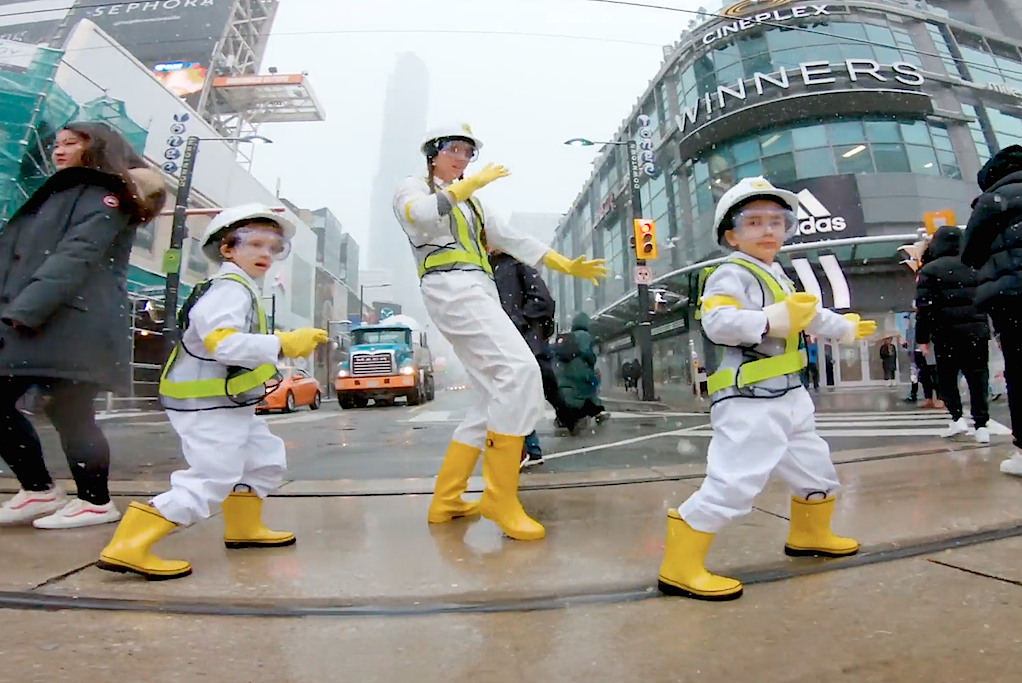 A new video was circulated on Reddit Toronto today showing a mother and her two kids dancing and playing through the streets of the city decked out in bright white construction uniforms in homage to the classic Beastie Boys video for the song “Intergalactic.”

The creative person at the heart of the project is Angela Young with her children. The two people who shot the video work alongside her at Unreasonable Studios — a creative production company. Of course.

“We did the whole shoot which was essentially a walking tour from Front and Spadina to Union via the PATH and up to Yonge/Dundas Square on the TTC in under two hours,” Young says. “You have to move quickly with kids out in a snowstorm!”

The video is already going viral.

“People were stopping to take pics with us all along the PATH and at our final stop at Yonge/Dundas Square when we were in the all-way stop people knew exactly what we were up to and were watching excitedly at the corners. Lots of people were sharing their Beastie Boys love with us,” she says.

The video is actually a companion — as if we aren’t jealous enough of this level of holiday creativity — to printed postcards Young sent to family and friends with a QR code that links to it.

Finally getting into the holiday spirit this week and hope you are too! For this year’s card theme, we channeled the ultimate trio #thebeastieboys and one of my all-time favourite music videos, “Intergalactic” for inspiration. Getting those work suits in child size was a lot harder than you’d think. 📷 @christianflook

Although the video is sure to garner some serious hype, Young says the time spent with her kids was the most rewarding.

“The best part was definitely seeing the excitement on my kids’ faces and I honestly love how they have no self-consciousness about doing whacky creative things like this,” she says.