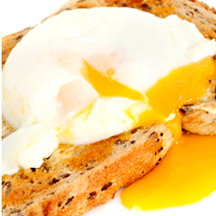 You won’t get scrambled over the $13 eggs. They’re that good.

Its comfy living room appeal is the perfect complement to delectably firm poached eggs with a drizzly centre, bathed in a cheesy sauce and paired with fresh multigrain toast, fruit and fried potatoes.

Even though it’s only steps away from dripping-in-cool Ossington Avenue, Mitzi’s on College caters to families and coffee-sipping, newspaper toters alike — all who come in peckish and leave in a hazy food coma.

The original Mitzi’s (100 Sorauren Ave.) opened 13 years ago. Nestled on a residential corner in Parkdale, locals snuggle inside like sardines to chit-chat with neighbours and eat homemade muffins and eggs.

Its popularity gave rise to Mitzi’s Sister (1554 Queen St. W.), the bigger and wilder sibling, which opened six years ago around the corner. The menu boasts hearty selections, like hamburgers, sweet potato fries and locally brewed beer. The second of the three Mitzi’s is known for its late night live music.

Mitzi’s founder Leslie Gaynor’s third venue on College isn’t any less tasty. Make sure to sample one of the chain’s signature favourites, oatmeal buttermilk pancakes, with a different topping every week.