The scariest haunted houses to visit in Toronto this Halloween | TRNTO.com
Skip to content 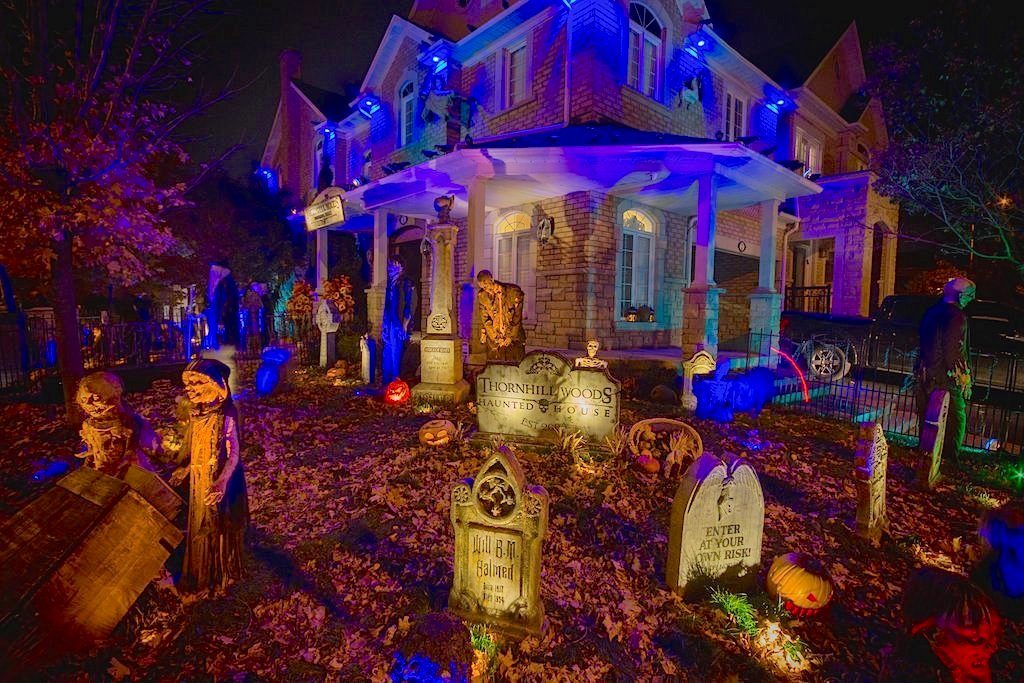 October marks that fun-filled time of year when even the most modest, tasteful decorators start slapping cartoon skeleton posters on their front doors and stringing fake spiderwebs around their windows. But some homeowners take this annual opportunity to the next level with their over-the-top Halloween displays. We’ve rounded up some of the most boo-tiful Halloween homes to check out this month.

For the 15th Halloween in a row, the Thornhill Woods Haunted House will be scaring up funds to benefit the SickKids Hospital For Sick Children.

It is the brainchild of homeowner and Halloween enthusiast Chris Ainsworth who, with the help of family, friends and neighbours, spends days setting up the display each October.

Ainsworth has two boys, aged 13 and 15, who experienced health problems when they were younger.

“We were in and out of SickKids, and we wanted to give back,” said Ainsworth. “We just started decorating for Halloween and then we got the idea of putting out a donation box and raising funds for SickKids, and then it kind of took on a life of its own.”

Ainsworth said due to the haunt’s growing popularity, which now sees about 3,000 visitors each Halloween night and has corporate sponsors, he’s now raised $123,000 for SickKids.

Ainsworth’s front yard is awash with static props, such as tombstones, as well as props that move, often jumping up to scare people, via the large air compressor he had installed in his basement.

“I guess some guys like to go hunting or fishing, or spend their money on their motorcycles or hot rods. I’m into Halloween; that’s my thing.”

The event has changed in recent years, as a walk-through haunted house from previous years is no longer there due to Ainsworth’s life becoming busier, but this will be the third year Bounce Entertainment will set up a stage in his driveway to provide live music to create a street party atmosphere on Halloween night.

Ainsworth said prizes will be available for things like best costume and best dance off.

The Thornhill Woods Haunted House display will run from Oct. 28 to 31, with live entertainment, contests, freebies and prizes happening on Halloween night. 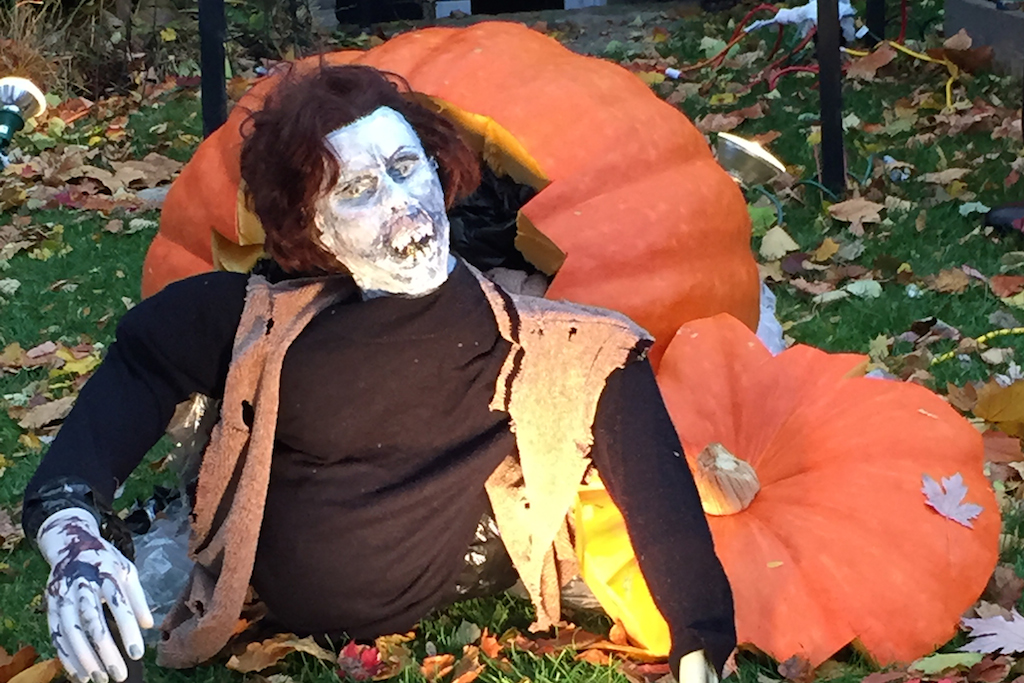 Heddington Avenue’s artsy Halloween event sees life-sized posters of pop icons, from the Little Mermaid to Harry Potter, taking over the street. Heddington resident Barb Gordon is the founder and artist behind the event, now in its 21st year, which has become an annual fundraiser for the Hospital for Sick Children. In recent years, Gordon partnered with the Eglinton BIA to close the street between Eglinton and Roselawn from 4 to 8 p.m. to create a car-free space for visitors, costumed actors, musicians and other festivities.

Each year, Gordon recruits a team of neighbours to help her set up the display, which includes a new hand-painted poster series at her own home (2019’s theme is extra spooky: Hotel Transylvania), along with works from previous events showcased on nearby residents’ lawns. Gordon estimates the event attracted about 4,000 people last year, and raised just under $20,000 for SickKids between 2013 and 2018.

“We’ve had visitors from Europe and all over the place,” says Gordon.

Glenlake Avenue in the Junction Triangle 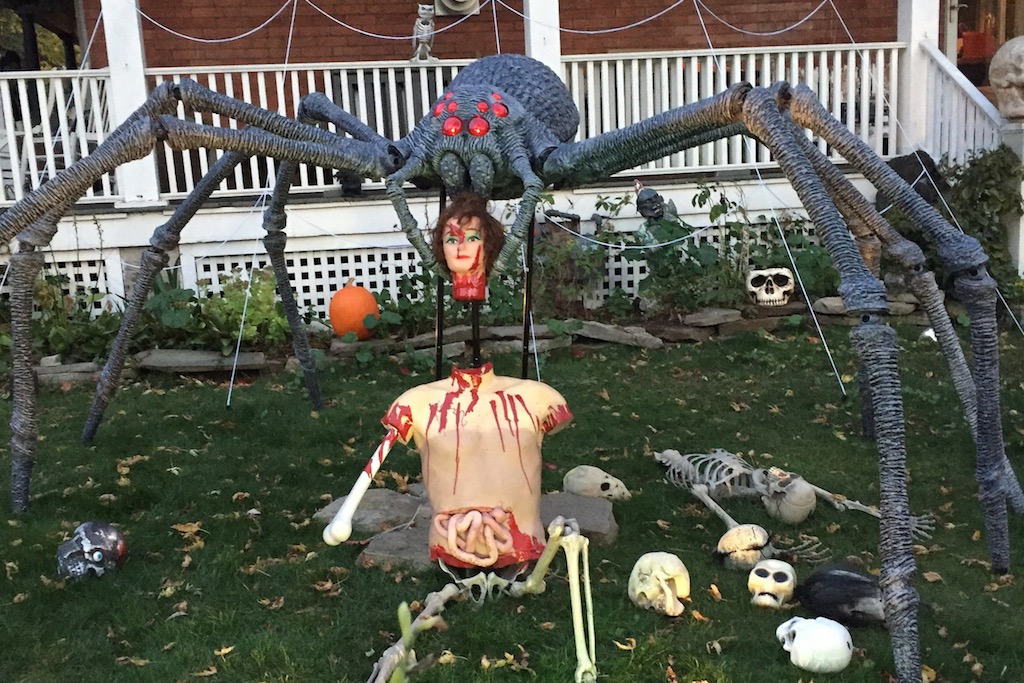 Karin Martin and her husband Trevor Walker have always decorated their home in the Glenlake Avenue and Dorval Road area for Halloween, but over the last four years, the results have been particularly dramatic. Features have included smoke effects, towering horse skeletons, trees disguised as ghouls and campy faux graveyards.

“My husband is extremely crazy and talented at the same time,” Martin says jokingly.

Although Walker is the main architect of the family’s Halloween look, Martin says her work in the film industry has enabled her to source some interesting props over the years, including spooky fabrics. (Yes, Martin says spooky fabrics are a thing!) Needless to say, their home is a hot spot for trick-or-treaters, attracting hundreds of families every Oct. 31.

“We spend so much money on candy,” Martin says and laughs.

Kyla Tomlinson and her friends have been creating a Halloween-themed maze on her Scarborough front lawn every October since 2012. She says the maze has expanded each year, with the team typically starting the annual construction in early October.

The Tomlinson Haunted Maze at 116 Halsam St. is constructed from large plywood boards, with Halloween decorations, animatronic accessories and costumed live actors providing the haunting finishes. The design is a little different each year in order to keep regular visitors guessing.

Tomlinson says that this year’s maze has “lots of twists and turns and pop-outs where people won’t expect them to be.”