Best of Toronto: Where to find the best poutine, Canada’s iconic snack - TRNTO.com
Skip to content 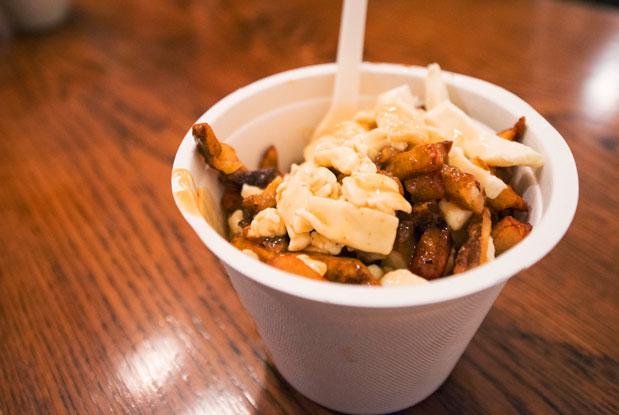 We can thank our Quebecois neighbours for pioneering poutine, the ultimate dirty dish of hot French fries doused in gravy and cheese curds. It’s bewildering that a Heritage Minute hasn’t been created for Canada’s signature snack.

The poutine craze is raging across Toronto, with poutineries and recipe variations popping up across the city. We consulted with food writers and poutine lovers, and we’ve selected our favourite spots where you can get your poutine fix in Toronto. Some spots are well-known; others may surprise you. But it’s a starting point for your poutine pilgrimage – the list is ever-expanding.

Poutine purists may see some recipe renditions as bastardizing an already delicious snack with unnecessary fixings; but remember Toronto’s motto: “diversity is our strength.”

From our highly scientific poutine polling, Poutini’s is the bomb diggity, winning fans for flavour and fixings. The basic poutine ($5-7) is a carton of Belgian-style frites topped with cheese curds, gravy, and beef (optional). Cheese is delivered daily from Maple Dale Farms, and bones and veggies are simmered for eight hours to make a thick, homemade gravy.

You can also bedazzle it with pulled pork, roasted mushrooms, onions, or “the works” (sour cream, bacon and chives). Vegetarians dig the Vegan Poutine with Vegan Gravy (made from roasted veggies) and Daiya Cheese, and there’s even a gluten-free version of the gravy.

What we love? Although poutine is already a Canadian dish, the menu features a few uber Canuck-inspired variations, such as Smoked Meat Poutine or Bacon Poutine with maple syrup. 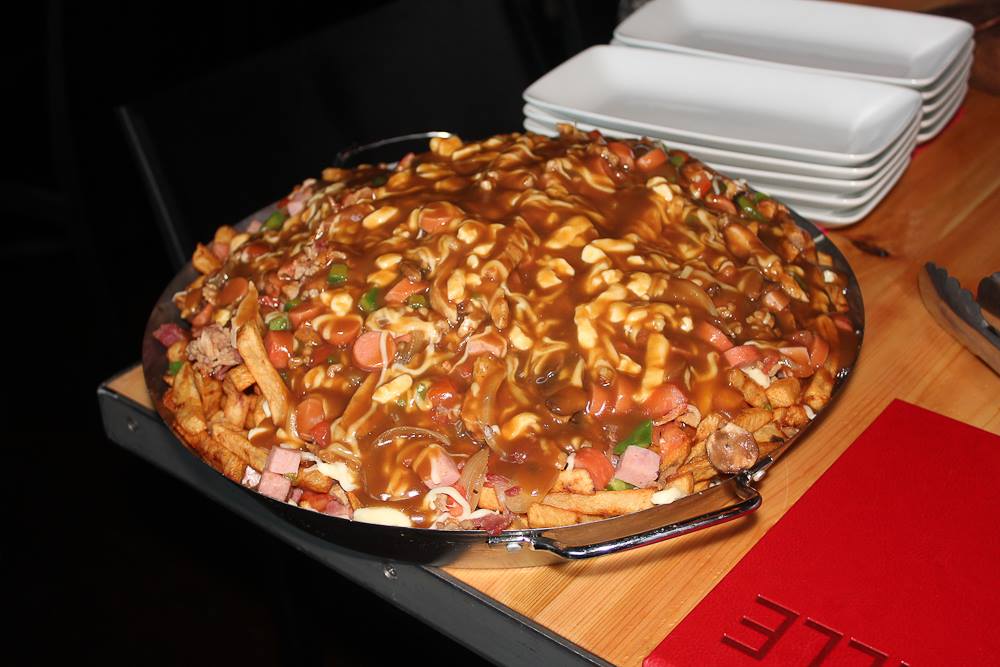 The showstopper on the menu, however, is the Biggest Poutine in Town ($100) – a 15-pounder with piled high on a plate with five types of meat, a slew of toppings, and crispy potatoes. 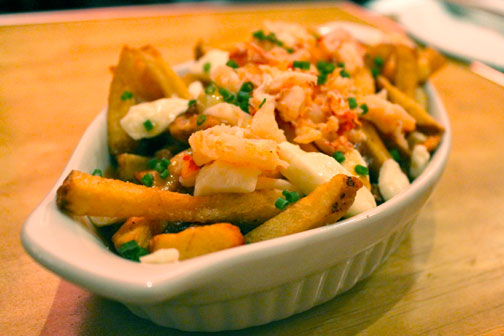 Rock Lobster isn’t a poutinerie; but if you have champagne tastes, order Lobster Poutine ($15) at one of Chef Matt Dean Pettit’s crustacean-themed eateries. Meaty chunks of Nova Scotia lobster are mixed with Yukon gold fries, chives, and Quebec cheese curds, and slathered in a rich lobster bisque gravy.

Rock Lobster, 110 Ossington Ave. (and one other Toronto location) 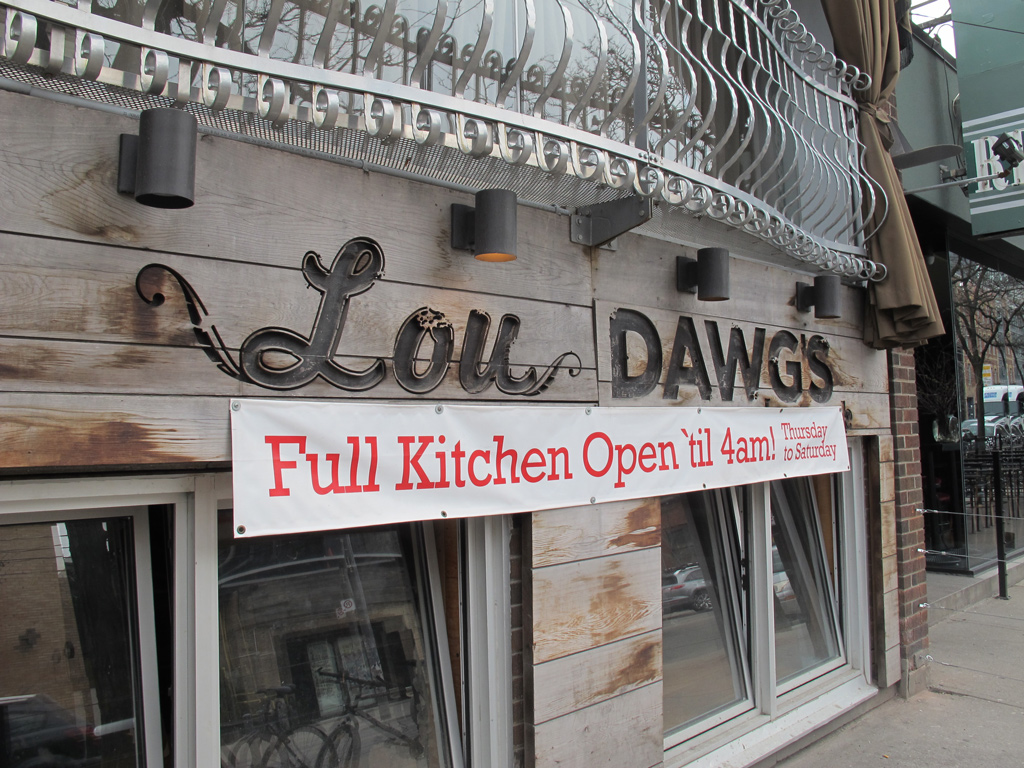 Famous for its Southern-style slow smoked meats, Lou Dawg’s steaming basket of poutine looks sloppy but tastes gourmet. There are plenty of Southern-inspired variations here, such as a Meaty Bean Poutine ($8-12) and Chili-Cheese Poutine ($8-12). For the Mighty Loutine ($8-14), fresh-cut Yukon fries are topped with homemade chicken stock gravy, cheese curds, and your choice of pulled pork, chicken, or – brace yourself – brisket that’s been braised for 12 hours until the meat falls off the bone. The meat is so tender, dissolving on the tongue with a sweet and smoky gravy. For late night poutine emergencies, Lou Dawg’s is open on Thursdays to Saturdays until 4am.

Yes, Virginia, there is a breakfast poutine. In fact, it’s quickly becoming a “thing” in Toronto, and to feast on one of the best, head to Queen St. East. On weekdays only, Leslieville’s Lady Marmalade serves an A.M. Poutine ($7.75) with baked hash browns and cheese curds smothered in either hollandaise sauce or a veggie-friendly miso gravy. For a few extra bucks, you can add a poached egg, bacon, and/or pulled pork. 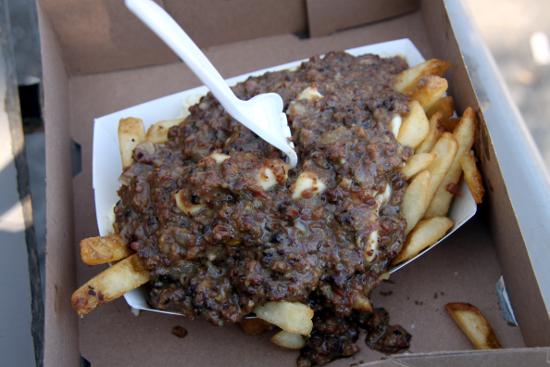 It may be the mecca for knishes and Montreal-style smoked meat sandwiches, but this beloved Toronto eatery also offers a bold poutine variation unlike any other. The dish has the usual crispy French fries and cheese curds, but slathered in a chunky smoked meat sauce. Purists will balk at this deviation; but poutine voyeurs will aroused.

This modern French bistro in the Distillery District has a secret weapon on the menu: Beef Bourguignon Poutine ($13-16). A plate of frites are topped with braised beef, pearl onions, mushrooms, and cheese curds, adding a dash of Parisian flavour to a traditional Quebecois dish. The word on the street is that Cluny’s rendition is the Julia Child of poutines. Oh mon dieu!