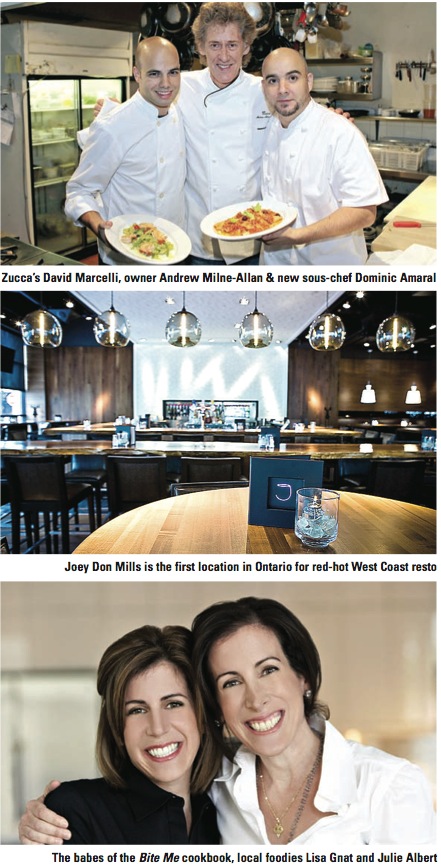 Zucca’s managing partner, Blair Aspinall, says he’s thrilled with this latest addition to the kitchen, having first met Amaral when he was a sommelier at Susur several years ago.

“Andrew has spent the past 14 years guiding this restaurant, and he is really devoted to regional Italian cuisine based on seasonal and local produce,” says Aspinall. “He’s a great leader, and then having Dominic come in here and bring his organization and enthusiasm makes him a great asset to the team. He’s great in the kitchen, a great guy, and we love having him here."

Once the go-to spot to sample the fare of celeb chefs such as Tawfik Shehata, Rodney Bowers and Patrick Lin, management said the customer base at Truffles had dwindled over the past several years as the demand for high-end service ebbed, and the current economic downturn was the final nail in the luxury resto’s coffin.

Word is the new Four Seasons hotel, now under construction at Bay and Scollard Streets, will have only one large dining room with a more casual atmosphere.

“We are not celebrity chefs,” says Lisa Gnat.

“We are perfectionist June Cleavers, two sisters who share a love of food, family and fun…. Bite Me is a celebration of all those things.”

Bite Me was something of a labour of love for the authors, sisters and Forest Hill residents Julie Albert and Lisa Gnat. After they failed to find a publisher, they decided to go the self-publishing route.

The book, priced at $29.95 and clocking in at 272 pages, with design from the fine folks at Bruce Mau Design, is now available in Chapters and Indigo stores nationwide, and a website is in the works.

“Their [the publishers] concern in the age of celebrity chefs was that we didn’t have the profile,” says Albert. “They told us to go build our profile and then come back.

“We sulked for a weekend, but it has really been a blessing in disguise. In the end, we wouldn’t have to adhere to any cookbook rules, and we could create a book we loved and believed in.”

The book, which covers everyday meals designed for busy families that don’t want to shop at a dozen different stores to find obscure ingredients, is filled with jokes, pop culture references and a playfulness not normally associated with the genre.

Toronto’s Didier Leroy, owner and chef of Didier at Yonge and St. Clair, was awarded the title of Maitre Cuisinier de France, recently. Bestowed by an association in France, Leroy says that there are just 330 chefs with the title.

Leroy came to Toronto in 1988 plying his trade in Michelin-starred restaurants in France. After working in a number of fine restaurants around town, including the Fifth, he opened Didier five years ago. Despite a rough year, he says he “can’t complain.” The award follows the Medal of the Chevalier de l’Ordre du Mérite Agricole Leroy received three years ago, one of the highest honours of the French government.

“It was most special because cooks decide this,” says Leroy. “It is about what you achieve outside of France and that you represent where you come from and where your roots are.”

Late last month, it was announced that Jamie Kennedy Wine Bar was sold to Ted and Mary Koutsogiannopoulos (Ted is the former owner of Joy Bistro in Leslieville) along with new co-owners Scott Vivian, chef at the Gardiner location and Rachelle Cadwell, pastry chef of the Gilead Café.

The new ownership group takes over this month when the restaurant changes its name to just The Wine Bar. Hank’s, the café next door, is also included in the deal.

In other JK news, you could spend a week in Tuscany with the chef during the Petraia Sessions, a culinary adventure (www.lapetraia.com).

Local resident Ryan Grossman may have tapped into something big. He is the man behind a plan to bring a century-old Swiss chocolate to Canada just in time for the holidays. Beschle Chocolatier Suisse will debut at Yorkdale Mall this month. Beschle was founded in 1898 in Basel, Switzerland, and includes a collection of truffles, bars and some out-of-this-world hot chocolate.