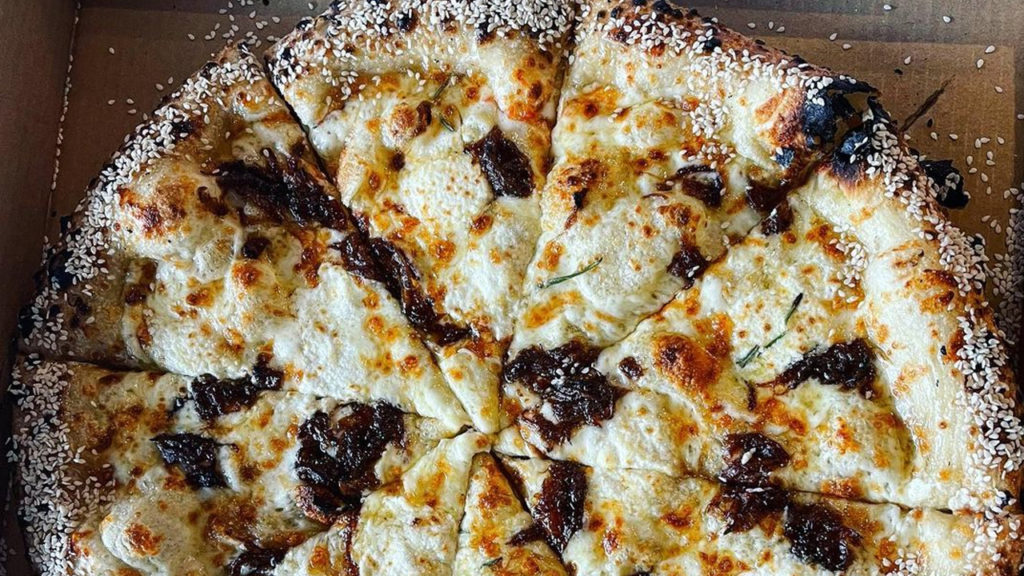 White pizza, also known as pizza bianca, is a traditional Italian pizza that doesn’t use red tomato sauce. With one of the most flavourful elements of the pizza completely out of the equation, the secret to an incredible white pie isn’t in the sauce but instead, is a balanced mixture of olive oil, garlic, salt and cheese. Whether you’re a tomato-hater or just want to change up your go-to pizza order, we’ve got you covered with our picks for the best white pizza in Toronto.

Most famously known for those tiny pepperonis that are cooked just right and their soft, doughy sesame crusts, Maker Pizza offers three white pizzas, which are available in small and large sizes and range in price from $21 to $37. The Frank’s Best uses a three-cheese blend of goat’s cheese, parmesan and organic mozzarella, and features caramelized onions, honey, rosemary and sea salt for toppings. The Final Return of the Mac is a vegetarian white pizza that puts a cheesy twist on a famous fast-food burger: Impossible Foods vegan meat, dill pickles and secret sauce are loaded on a blend of mozzarella and cheddar.

A post shared by North of Brooklyn Pizzeria (@northofbrooklyn)

With four locations across the city, North of Brooklyn is a top spot for white pizza, offering medium-sized pies (14”) for $18 and large-sized pies (18”) for $26. There are three white pizzas to choose from, including the Kale and Bacon, which is mozzarella and garlic oil-based with pecorino, double-smoked bacon, and kale on top. A special white pizza, called Green Out, is back for a limited time, and uses salsa verde, mozzarella, spring cream, spinach, semi-dried tomatoes and pecorino.

Unmistakable thanks to its bubblegum pink exterior, Blondie’s is known for some of the best white pizza in Toronto, affectionately referring to them as “blondes.” All blonde pizzas feature an Alfredo-style sauce and full-fat mozzarella (yay for extra stretchy cheese!). There are six blonde pizzas on the menu, ranging in price from $17 for a 13” to $27 for a 16”. Blondies offers two vegetarian white pizzas, including My Friend The Model, which is topped with a blend of pistachio, red onion and Grana Padano cheese. The remaining four white pizzas feature a variety of meats including Venetian salami, chicken sausage, pancetta and pepperoni, and a range of cheeses, like smoked mozzarella, provolone and parmesan, alongside toppings like bitter greens, fennel, pecorino and arugula.

With nearly 20 pizzas on the menu, the Parlour puts an unconventional spin on its selection of white pizzas. Available in one size only, ranging from $23 to $27, all of the Parlour’s doughs are vegan-friendly and there are vegan pizzas, too, made from ingredients like cashew burrata cheese and Beyond Meat sausage. All doughs can also be made gluten-free for an extra charge. Our white pizza pick is the Goldmember, which features cashew burrata, caramelized onion, roasted mushrooms, Yukon Gold potato, truffle oil and mushroom dust.

Terroni is home to 28 pizzas, four of which are white-sauced pies. The Puzza is a simple white pizza, featuring Italian shaved ham, a three-cheese blend of mascarpone, mozzarella and gorgonzola cheese, plus mushrooms. A more adventurous white pie is the C’T Mang, featuring mozzarella, gorgonzola, fresh slices of pear, walnuts, strips of smoked prosciutto and honey.