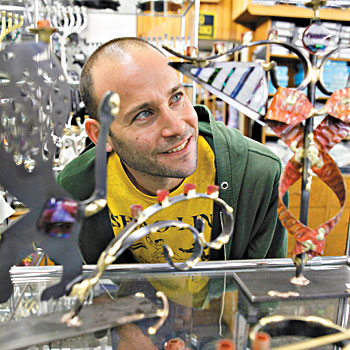 Exploring the Little Israel area of the city, that place on Bathurst above Lawrence where the Mitzvah bus line passes by, is like stepping into my past.

I’m from Sheepshead Bay, the Thornhill of Brooklyn, and so seeing a “for lease” sign where the sales representative is named Tzemach Avraham makes me feel right at home.

The first place I go into is Gryfe’s Bagels where the women at the counter are all from the Philippines and a bagel and cream cheese is two dollars. On a message board taped to the fridge is a handwritten note: “Let us drive you to Florida.”

I call Fred Ormston, who has a 905 number, to inquire about his “personal services,”but I get his answering machine, and he doesn’t return my call. Maybe he’s already in Florida. Anyway, on a one-to- 10 cream cheese scale,I give Gryfe’s eight scoopfuls. I’m actually wiping my mouth when I walk into Grodzinski Bakery, where the man behind the counter wears a kippah.

“It’s what we eat in Israel for Chanukah,” says Ester Rokach, feeding me an Israeli doughnut called a “sufganiyot,” and I walk around Grodzinski with two Orthodox men. “I’m not sure exactly what I’m in the mood for,”jokes one man to Rokach.“Let me get two or three or four hundred tastes.”

Rokach is darling, and while I’m chewing the sufganiyot, she feeds me rugelach and challah bread and tells me about her son, a doctor.

“He’s a Benjamin also,” she tells me. “My little son Benji …ahh,but he’s not so young.”

I’m thinking about my grandmother, who I lived with for a while back in New York, when I meet Moshe Joseph, who owns the Aleph Bet Judaica shop and tells me business is off.

“Costco, it’s ridiculous,” moans Joseph, who says that the rarities in his store are now sold all over town. “People can now get their Chanukah plates at Winners! At Winners! It’s not an easy way to make a living, that’s for sure.”

I’ve been to Winners before, and who doesn’t love Costco? However, I have to go out on a limb and say the $3.99 plastic Aleph Bet stencils aren’t available at either place. It’s like everything on this part of Bathurst Street is from some other time. But nothing could prepare me for what I find next.

“Do you have any ID?”asks the man at the door at Milk ‘N Honey, a Jewish restaurant where the imposing man at the front centre table wears a long grey beard and a firm black hat.

The restaurant is dead silent and, while a waitress scurries about with a pitcher of orange juice, each man seems to be peering at me.Everyone in the restaurant wears the same undertaker’s drab black clothes and sinister beard.

Of course, I don’t have any ID, but thank God (no disrespect), a Post City Magazines box isn’t far.I show the man at the door my column, and he hands me a blintz.

“Oyyyy,I’m supposed to deliver food to a shiva house,” says a modern-Orthodox woman with a gorgeous smile in line before me who tells me her brother caught the Jerusalem syndrome.The man behind the counter is named Moshe Zombek,and Milk ‘N Honey is hosting a private party, and the cheese blintz is delicious.The area is bustling because it’s Friday afternoon and everything closes for Shabbat at sundown.

I hustle into Negev Importing,adjacent to Kosher City, and the man at the counter is watchful. I sneak past rows of books on theology and kosher law and take in the tchotchkes, the menorahs and mezuzahs,the Chanukah dreidels and the ephemera I haven’t seen this closely since I was back at my grandmother’s house.

“The lady here got all frustrated with the dreidels,” I overhear him say, reprimanding someone on the phone. “I don’t know why you can’t get in here at 10. That’s when we open.Why is that so hard to do?” I love this man, who turns out to be named Morty Kaplan, and then I find the best thing in the world:“Mazel Tov to you!” scream the bright pink greeting cards, and I smile broadly. Every single member of my family will laugh at these cards.

Tov-Li next door is a hangout spot,and I sit between two 1,000-year-old women and a group of five kosher pizza–eating teenage girls. I meet the owner’s son, David Epstein, 32, who wears an Adidas tracksuit and big sunglasses and tells me I look familiar.

I don’t think I saw him last night at Harry Potter and the Deathly Hallows, but it could be. I sit behind the girls and this is what they say: “Because we love each other, OK?” “I’m friends with her,that’s why I know she’ll come to my sweet 16.” “The girls way older, no offence, are a bunch of bitches, OK?” “I want to go to L.A.”

Kosher pizza tastes pretty good, lots of garlic, and I try to initiate conversation with the kids.

“I’ve been to L.A.,”I say,and their table goes quiet. I realize I seem like a pervert. OK: Next place.

Daiter’s was first opened in Kensington Market in 1937, and Stephen and Joel Daiter, one at the register, one behind the cheese counter,swear they get along.

“The only thing worse than working with a sibling is working with a spouse,” says Stephen, and he assures me that Daiter’s has the city’s best Chanukah latkes. I buy a dozen and a six pack of black cherry Dr. Brown’s soda.

I gather my riches and head back onto Bathurst and get sad. Opposite the Baycrest Hospital is a granite memorial factory store where Jewish tombstones can be custom made.

In the window, there’s one engraved “Holocaust survivor,” and as the Medi-Vac vans go in and out of the hospital, it’s hard not to get a little bit wistful about all I have to be thankful for.

Next door to the tombstone factory is a place called Chocolate Charm,and inside the smell nearly knocks me over. It’s dark chocolate with an almost peppermint bite, and I see a chocolate lollipop that says, “Love you.”Maybe I didn’t say that to my grandmother enough. Maybe I should say it to my father-in-law. Little Israel north of Lawrence on Bathurst Street is an unusual neighbourhood. It’s also one of the best there is.

Ben Kaplan is a features writer for the National Post